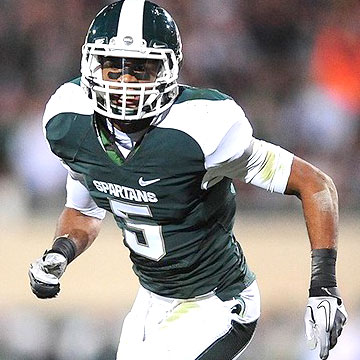 The secondary looks like a strong position in the Big Ten in 2012. Four of the eight defensive backs named first- or second-team All-Big Ten by the coaches in 2011 are back: Michigan State?s Johnny Adams and Isaiah Lewis, Ohio State?s C.J. Barnett and Purdue?s Ricardo Allen. Three named first- or second-team by the media return: Iowa?s Micah Hyde, Lewis and Adams. With three selections, Michigan State is well-represented in my ranking of the top 10 defensive backs in the Big Ten for 2012.

The Spartans also had three players ranked among the top 10 linebackers. Bottom line: Michigan State may have the top defense in the Big Ten for a second season in a row.

What stars are gone? Let's have a look.

1. Johnny Adams, CB, 5-11, 175, Sr., Michigan State. Adams is talented, versatile and perhaps the top NFL prospect in the Big Ten. Playing the boundary corner slot, Adams was a first-team All-Big Ten choice. He started at field corner in 2010 and was a second-team all-league choice. Now, Adams-who could take some snaps at receiver–is poised to lead the Big Ten?s top defense as a top Thorpe Award candidate.

2. Micah Hyde, CB, 6-1, 190, Sr., Iowa. He moved from cornerback to free safety in 2011, but he ended up playing both spots last season-mostly corner. Hyde has prototypical size for a corner and possesses good speed. He?s also a playmaker, tying for first in the Big Ten in passes broken up with 11 last season. Hyde also notched three picks.

3. Ricardo Allen, CB, 5-9. 176, Jr., Purdue. Upon arriving on campus, Allen started all 12 games as a true freshman in 2010 and hasn?t looked back. What Allen lacks in size he compensates for with tenacity and technique. He?s also a dedicated player who spends hours in the film room and even taught himself how to juggle to improve his hands.

4. Isaiah Lewis, S, 5-10, 195, Jr., Michigan State. Lewis is a big hitter with a bright future. He?s entering his second season as the starting strong safety. Lewis showed a flair for the dramatic in 2011, running back two interceptions for touchdowns. He also broke up seven passes en route to finishing with 74 tackles.

5. Daimion Stafford, S, 6-1, 205, Sr., Nebraska. He arrived as an acclaimed junior college transfer and hasn?t disappointed. Stafford loves to be physical vs. the run, but also has a knack in coverage and rarely is out of position. The uber aggressive Stafford finished third on the team in tackles last season with 80. He also led the team with 10 passes broken up. Coaches will look to him to provide leadership to what should be a strong secondary.

6. C.J. Barnett, S, 6-1, 202, Jr., Ohio State. The hard-hitting Barnett has started all 15 games he has played in. He got his feet wet on special teams in 2009 and moved into the starting lineup in 2010 before a knee injury in the second game ended his season. Barnett rebounded to pace the Buckeyes with 75 tackles last season to earn second-team All-Big Ten accolades for a defense that returns nine starters.

7. Terry Hawthorne, CB, 6-0, 190, Sr., Illinois. The athletic Hawthorne was a star the moment he stepped onto the field In 2009, when he totaled 30 tackles with five passes broken up. Last season, Hawthorne made 60 tackles off the edge and led the Fighting Illini with three interceptions and eight passes broken up. The new staff also likely will use Hawthorne at receiver to inject some playmaking skills at the spot.

8. Bradley Roby, CB, 5-11, 190, So., Ohio State. Looking for the next great Buckeye cornerback? This guy may be it. Roby had a smashing debut in 2011 as a redshirt freshman. He led the team with nine passes broken up last season to go along with three interceptions. Roby has good quickness and instincts, showing a knack for playing the pass and the run with equal aplomb.

9. Darqueze Dennard, CB, 5-11, 190, Jr., Michigan State. He emerged last season as a strong corner. Now, Dennard looks to become a star in his second season as the No. 1 field corner for MSU. He notched honorable mention All-Big Ten honors in 2011 with 42 tackles. And also he tied for third on the Spartans with six passes defended, including three interceptions. Dennard-who started twice as a true freshman in 2010–may have been at his best in the stunning Outback Bowl triumph over Georgia, when he picked off two passes.

10. Jordan Kovacs, S, 6-0, 197, Sr., Michigan. When it comes maximizing your talent, few can top the former walk-on. Kovacs has been a steady force over the years to become a valuable player and a leader for a surging Wolverine defense. A strong safety, Kovacs has a nose for the ball and rarely is out of position. He?s also a sure tackle and underrated in coverage for what should be a strong Michigan secondary.