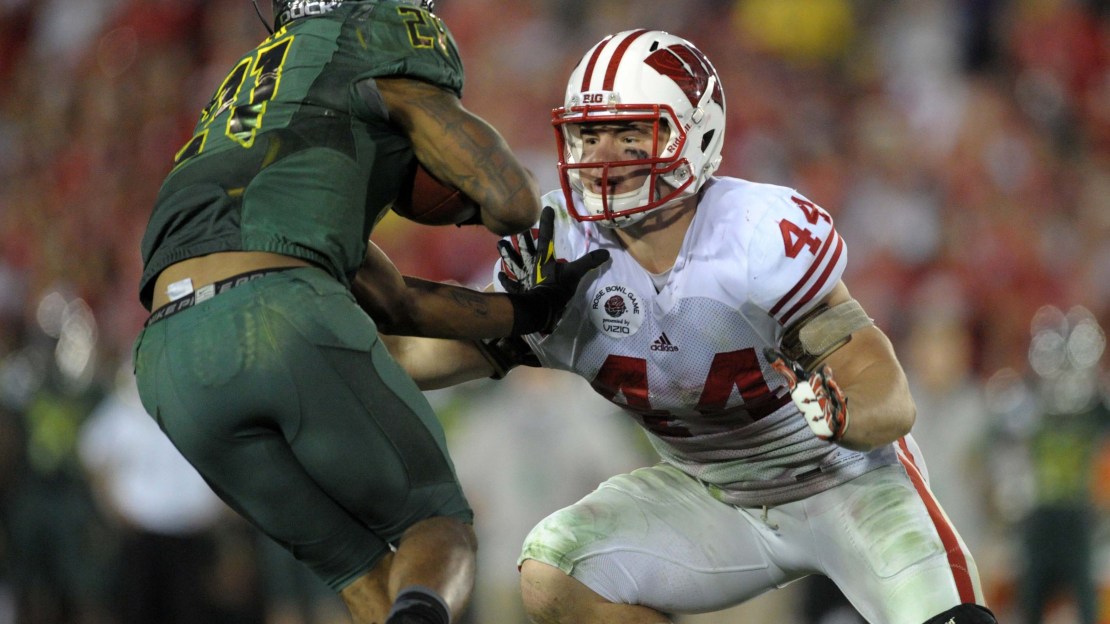 The linebacking spot may be the most talented of any position on defense in the Big Ten in 2012. Wisconsin?s Chris Borland and Mike Taylor; Michigan State?s Denicos Allen; Illinois? Jonathan Brown; Penn State?s Gerald Hodges all are back after earning either first- or second-team All-Big Ten accolades in 2011.

The only linebackers who earned first- or second-team All-Big Ten honors who are gone are Nebraska?s Lavonte David and Ohio State?s Andrew Sweat. And of those two, only David was selected in the NFL draft (second round/Buccaneers). Penn State?s Nate Stupar also was picked (seventh round/Raiders), but he was just an honorable mention All-Big Ten selection last season.

1. Chris Borland, 5-11, 250, Jr., Wisconsin – A Tasmanian devil, Borland always is on the prowl from sideline to sideline. He has been unrelenting since earning Big Ten Freshman of the Year in 2009. A shoulder injury ended his 2010 season after two games, but Borland rebounded to earn first-team All-Big Ten honors last season after ranking fourth in the Big Ten with 10.2 tackles per game with 19 stops for loss. No one in the league plays harder.

2. Gerald Hodges, 6-2, 233, Sr., Penn State – He?s continuing the tradition of Linebacker U. Hodges received first-team All-Big Ten honors in 2011. He arrived on campus as a safety but quickly was switched to linebacker, where his speed and athleticism are put to good use. He rebounded from a hairline fracture in a leg early in 2010 to enjoy a strong season before becoming one of the league?s top linebackers last season.

3. Mike Taylor, 6-2, 222, Sr., Wisconsin – He was a second-team All-Big Ten pick in 2011, when he paced the Big Ten with 10.7 tackles per game (150 stops) which was the third-most in the nation. That was the highest tackle total at Wisconsin since Nick Greisen notched 167 in 2001. Taylor, a smart player who rarely is out of position, also had nine tackles for loss last season.

4. Jonathan Brown, 6-1, 235, Jr., Illinois – Brown emerged as one of the Big Ten?s top playmakers last season, ranking second in the conference in tackles for loss per game with 1.63. He led the Illini with 108 tackles and tallied 19.5 stops for loss with six sacks on the way to earning second-team All-Big Ten honoree from his spot at outside linebacker.

5. Denicos Allen, 5-11, 232, Jr., Michigan State – He is back to start for a second year on the strong side after earning second-team All-Big Ten honors in 2011. Allen arrived in East Lansing as a safety before switching to linebacker as a freshman. He hasn?t looked back, using his speed and athletic ability to make plays from sideline to sideline. Allen notched 83 tackles in 2011 with 11 sacks and 18.5 tackles for loss. He was second in the Big Ten in sacks (.79) and fourth in tackles for loss (1.32).

6. Max Bullough, 6-3, 252, Jr., Michigan State – He bleeds MSU Green, as Bullough is a third-generation Spartan with grandfather Hank and father Shane also playing for Michigan State. Two uncles (Chuck Bullough and Bobby Morse) also were Spartans. Bullough made an instant impact the moment he arrived on campus, making 23 tackles in 2010. He moved into the starting lineup at middle linebacker last year and hasn?t looked back, making a team-high 89 tackles in 2011 en route to earning All-Big Ten second-team accolades.

7. James Morris, 6-2, 230, Jr., Iowa – The rough-and-tumble middle linebacker finished fifth in the league in tackles per game with 9.2 last season. In addition to his production, Morris is lauded by coaches for his leadership. Morris was an impactful player the moment he landed in Iowa City, earning numerous Freshman All-American honors with a blue-collar attitude and work ethic.

8. Will Compton, 6-2, 230, Sr., Nebraska – Staffers feel like he played the best ball of his career over the last half of 2011. Now, the middle linebacker is primed for a big finish to his career as a wrecking ball inside for what should be a strong corps of linebackers. Compton finished second on the team in tackles last season with 77 stops. In addition to being productive, Compton is a field general who makes sure teammates are properly aligned and also calls out adjustments. He?s indispensable.

10. Chris Norman, 6-1, 230, Sr. Michigan State – He makes it three Spartan linebackers on this list. Yes, impressive. Norman will start for a third season this fall at the weak-side spot, where he uses his speed and athletic ability to be a tackling dynamo. Last season, he netted honorable mention All-Big Ten honors by ranking fourth on the squad in tackles with a career-high 76. Norman is a quiet leader who sets a good example. MSU defensive coordinator Pat Narduzzi loves the guy.