Week In Review: Where Does Your Coach Rank? 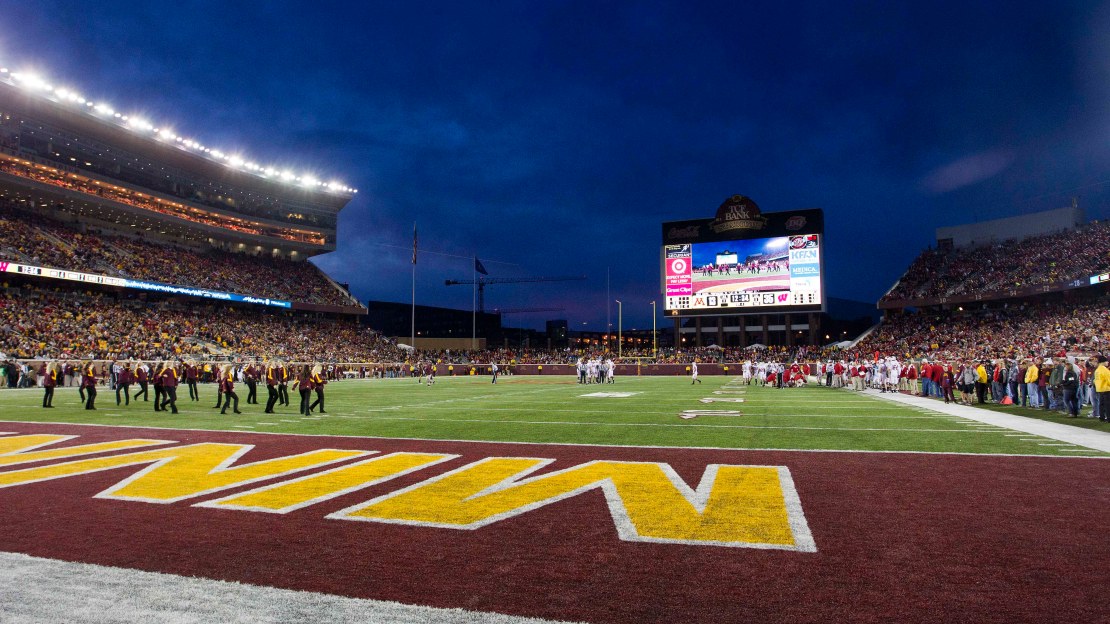 Before we get to Friday's Big Ten news links, let's review the week. Monday's post asked , "Which college fo0tball playoff format do you prefer?" On Tuesday and Wednesday we looked at the buzz around next year's top offensive and defensive stars.  And Thursday's post included a possible college football playoff tweak, next year's NFL Draft prospects, and a singing coach. My bookmark-friendly weekday links are always here, and you get the RSS over here.

And now, all the Big Ten grid news from Friday that is fit to link to is below. Lucky you. Your instructions: point, click, read, enjoy the links, including news that one publication ranked all FBS college football coaches from 1-124. Whoa.

Little help: While the Vikings build a new stadium on the site of the old Metrodome, they plan to play at the home of the Golden Gophers: TCF Bank Stadium. And it could mean as much as $3 million per season for the university.

School honchos haven?t decided how they will spend the additional loot, but it likely will be used for athletic programs.
This wouldn?t be the first time the Vikings played in ?The Bank.? When the roof of the Metrodome collapsed due to heavy snow in 2010, the Vikings played a game there. And the Vikings' Monday night tilt against the Chicago Bears was historic, as it was the last game of Brett Favre?s career.

Roll on: Michigan coach Brady Hoke looks forward to opening the season vs. Alabama on Sept. 1 in Arlington, Texas. No doubt, this will be the ultimate litmus test for the Wolverines in their continue detoxification from the Rich Rodriguez era. (Did that whole three-year period REALLY happen?)

The game with Bama will be the first of what could be an historically difficult schedule for the Wolverines in 2012.

Rank it: The Sporting News has done the impossible-and I mean the IMPOSSIBLE-by ranking every FBS coach from 1-124. What?s the difference between, say, Coach No. 54 and Coach No. 72? Think about it.

Instead, focus on the very top and very bottom of the oh-so-subjective list. We all love extremes.
From the ?water is wet? news category, Bama?s Nick Saban is No. 1. The dubious honor of riding in the caboose as Coach No. 124 is UMass? Charley Molnar.

As for the Big Ten coaches, Ohio State?s Urban Meyer leads the way at No. 3 on SN?s list. This from the same publication that not long ago did an epic rip job of the new Buckeye boss that kicked up a lot of dirt-none of which stuck.

Oh, well: Winning-or, I should say-winning BIG has a way of washing away any warts, real or perceived.
Where does your Big Ten coach rank?

Road trip: Dennis Dodd of CBSSports.com hitched a ride on Penn State?s magic bus, making whistle stops at various locales in the East to energize the ?We Are ? Penn State!? crowd. It?s fun read, going instead the tour circuit, as Nittany Lion fans meet the man-Bill O?Brien-who is replacing the legend-Joe Paterno-in this oh-so-historic and critical stage of the Penn State program.

Summer plans: Big Ten commish Jim Delany says a playoff format could be decided by July. Commissioners will discuss options at annual conference meetings - the Big Ten meets next week in Chicago - and are expected to meet with BCS exec Bill Hancock in June, potentially having a decision in place by early July. The new format would begin in 2014.

Delany again reiterates that a playoff likely would be four teams with a title event on a neutral site. The sticky points: How to select the teams, and where to play the semifinal games?

My two cents: Use a committee to select the teams-like they do for the NCAA hoop tourney-and play the semifinal games on the home fields on the higher seeded teams.

Other bowls have similar policies.

Bottom line: It?s a great deal for the bowls ? not so great for schools and conferences. (I am shaking my head.)

That game at Wrigley in 2010 between Illinois and Northwestern was mucho neato. Heck, any football game in that venue would sell out in, oh, a nanosecond. Since Wrigley is out of the equation because of configuration issues, how about playing a game in Sox Park. Yes? No? Maybe? OK, forgetaboutit.

I?m stunned it has taken Iowa THIS long to build an indoor practice facility. Well, better late than never. I will say: Renovated Kinnick is VERY nice.

IU football coach Kevin Wilson will recruit more speed in next class. "We want guys who give us some big-play ability," he said.

Isn?t that what every program wants? Indiana just needs more of it. I hope Wilson can get it.