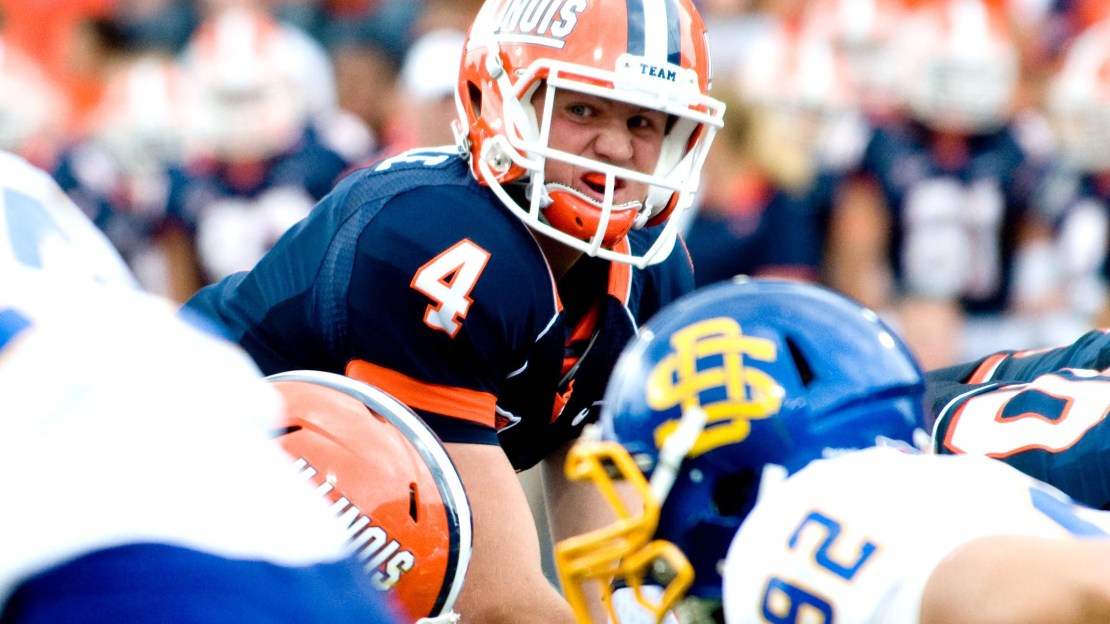 On one hand, he?s often the most popular player on campus. On the other hand, you may not even know his name. He?s the backup quarterback. If he?s pressed into duty, it usually means one of two things: 1. The starter got hurt. 2. The starter was, ahem, ineffective. Knowing all this, it?s time for you to get to know your school?s No. 2 signal-caller. Here?s is how I rank ?em.

It's the latest of my Big Ten off-season rankings. We're having fun with these and the fans are giving me an earful. Come back Friday when I rank the starting quarterbacks, too. More positions to come.

1. Robert Marve, Purdue. Honestly, this guy could be the starter, but that job belongs to Caleb TerBush. Regardless, Marve will play. A lot. His career has largely been about unmet expectations since arriving from Miami (Fla.) with a fat high school scrapbook and oodles of promise. A pair of knee injuries have hampered his development, but the former Florida Mr. Football looks fully functional and primed for a big send off after being granted a sixth year of eligibility.

2. Devin Gardner, Michigan. How much do we know about the 6-4, 205-pound junior? Not much for a guy who was rated the nation?s No. 1 dual-threat quarterback by Rivals.com coming out of Inkster High in Detroit. Being stuck behind Denard Robinson has kept Gardner largely cloaked in mystery. He appeared in three games in 2010 and nine last season. But he is just 18-of-33 for 261 yards with two touchdowns and a pick to go along with 32 carries for 74 yards and two scores. Could he play some wideout this fall? Hmmm. Like last season, count on Gardner again being used from time to time in concert with Robinson.

3. Rob Bolden, Penn State. New coach Bill O?Brien says he knows who will start but isn?t saying. But my hunch is it will be (kinda) steady Matt McGloin, a senior who has battled Bolden the past two years. Bolden looked like the future when he became the first true freshman to ever start at quarterback at Penn State in 2010. But the 6-3, 214-pound junior from Orchard Lake, Mich.-who has thrown for 2,045 career yards but completed only 50.3 percent of his passes with 14 picks and seven touchdowns–hasn?t developed. In fact, some think Paul Jones, a 6-3, 245 sophomore from McKees Rock, Pa., may be the No. 2 signal-caller. Jones has all the measurables, but he hasn?t taken a snap after redshirting in 2010 and missing 2011 due to academics.

4. Reilly O?Toole, Illinois. New coach Tim Beckman said after spring drills that Nathan Scheelhaase remains No. 1, but this is a new offense and new era. Stay tuned. The two split reps with the first team in the spring game. O?Toole arrived in Champaign amid big hype last year as the top player in the state coming out of Wheaton, Ill. The 6-4, 220-pound O?Toole passes the eyeball test. And he showed flashes last year as a true freshman, hitting 40-of-67 passes for 270 yards with a touchdown and four picks while playing in 10 games.

5. Kenny Guiton, Ohio State. The 6-3, 206-pound Houston, Texas, native is a dual-threat option behind Braxton Miller. And Guiton showed a growing grasp and knowledge of the spread scheme installed by Urban Meyer in the spring. But Guiton remains a largely unknown commodity who has thrown just two passes in his career.

7. Connor Cook, Michigan State. The redshirt freshman from Hinckley, Ohio, had his moments in the spring game, taking almost all the snaps for both teams with projected starter Andrew Maxwell out with a tweaked knee. The 6-4, 215-pound Connor showed poise and leadership in a game-like setting, throwing for 314 yards and a score.

8. Cameron Coffman, Indiana. Hoosier coach Kevin Wilson has made it abundantly clear that he wants to pass the ball better in 2012, with the quarterbacks hitting 60 percent of their passes. What does that mean for incumbent Tre Roberson? His hold of the top spot may be tenuous. The 6-2, 191-pound Coffman arrived from Arizona Western in time for spring ball and had his moments. A sophomore from Peculiar, Mo., Coffman hit 61.4 percent of his passes for 2,244 yards and 21 touchdowns last year in leading his JC to the national title game. Also, keep an eye on incoming freshman Nate Sudfeld, who could come in and quickly move up the depth chart.

10. Trevor Siemian, Northwestern. Kain Colter figures to win the job in camp, but Siemian will push him. The 6-3, 210-pound redshirt freshman from Windermere, Fla., looked good in the spring, capping his effort by hitting 8-of-14 passes for 119 yards with two touchdowns in the spring game. Siemian has a strong arm and decent running skills to execute the Wildcats? spread scheme.

11. Joel Stave, Wisconsin. Most assume that Maryland transfer Danny O?Brien will swoop in and win the job upon arrival this summer. And he probably will. But don?t discount Stave, a redshirt freshman who showed promise in the spring. The 6-5 former walk-on from Greenfield, Wis., has a decent arm and an understanding of the offense. If Stave stumbles, Wisconsin will have a number of other options behind O?Brien. But experience for all is scant.

12. Jake Rudock, Iowa. The 6-3, 200-pound redshirt freshman is all about promise at this stage after arriving from Weston, Fla. If senior James Vandenberg goes down, it could be trouble for the Hawkeyes.