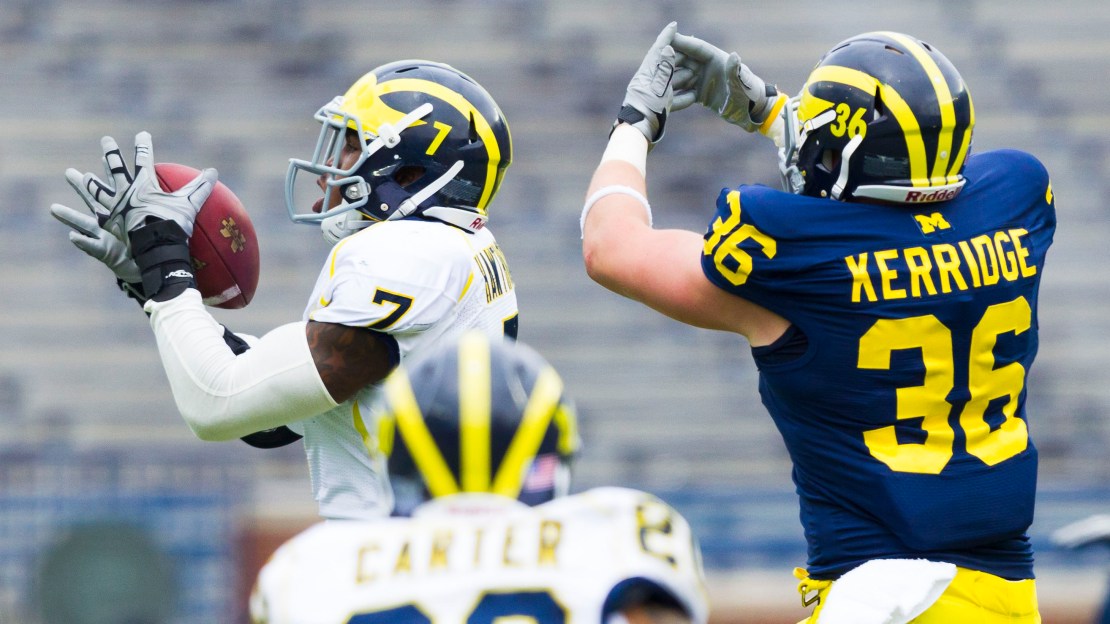 With 2011 Big Ten Football Championship Game participants Michigan State and Wisconsin wrapping up spring football Saturday, every Big Ten team can turn its attention to the summer. Here at BTN.com, we're not ready to put spring football behind us just yet. That's why we compiled this post featuring the best from this year's spring action. And when talking the best of spring, nothing — at least in our minds — comes close to topping Sparty lining up in the backfield and taking the handoff. Watch the entertaining play now.

Best performance: Ohio State WR Michael Thomas – 12 rec. for 131 yards. Not bad for a true freshman — not bad for any receiver on a team that's leading pass-catcher a season ago finished with 14 receptions. Yes, it was a spring game, but the performance still turned plenty of heads.

Best play: There were several terrific ones, including a bunch mentioned below in the video section, however it has to go to Sparty's play. While the awkward handoff and fumble wasn't a highlight, that's the kind of stuff that makes the usually mundane spring games entertaining. And then to hear star defensive end William Gholston, in the background, ask if he was in trouble for hitting Sparty — the whole thing made for one of the better moments this spring.

Attendance kings: A 2012 record 81,112 fans came out to Ohio Stadium to get their first look at Urban Meyer's Buckeyes. The previous record belonged to reigning national champ Alabama, which welcomed 78,526 fans to its spring game. Ohio State also holds the all-time record (95,722 in 2009), so this year's attendance shouldn't come as a big surprise. Either way, it's clear Ohio State fans are pumped for the Meyer era.

Let them play! Mother Nature affected Indiana, Nebraska and Purdue's spring games. The Hoosiers and Boilermakers scrimmaged indoors, while Bo Pelini and the Huskers opted to cancel their event. That same Saturday, Illinois didn't exactly have the best of weather day, either.

Seeing maize: The Wolverines all donned maize shoelaces for their spring game in an effort to support Lace up for Michigan (@LaceUpForUM), a fund-raising effort initiated and run by Wolverine student-athletes with support of the school?s athletic dept. Read more about it here. The maize shoelaces weren't the biggest cosmetic topic at Michigan Stadium, though, as the Wolverines suddenly Oregon-eqsue neon helmet numbers received its share of attention.

The new helmet stickers are almost neon, like Baylor unis.

Nothing beats all-access coverage, and Lisa Byington was invited into the Spartan huddle:

How about one-handed interceptions? Michigan's Brandin Hawthorne shows us how it's done:

Look who made an appearance at Linebacker U? Brian Urlacher, one of the NFL's top linebackers.

If you like X's and O's, watch this film session feature with Michigan State DC Pat Narduzzi: