Dienhart: What I learned Saturday 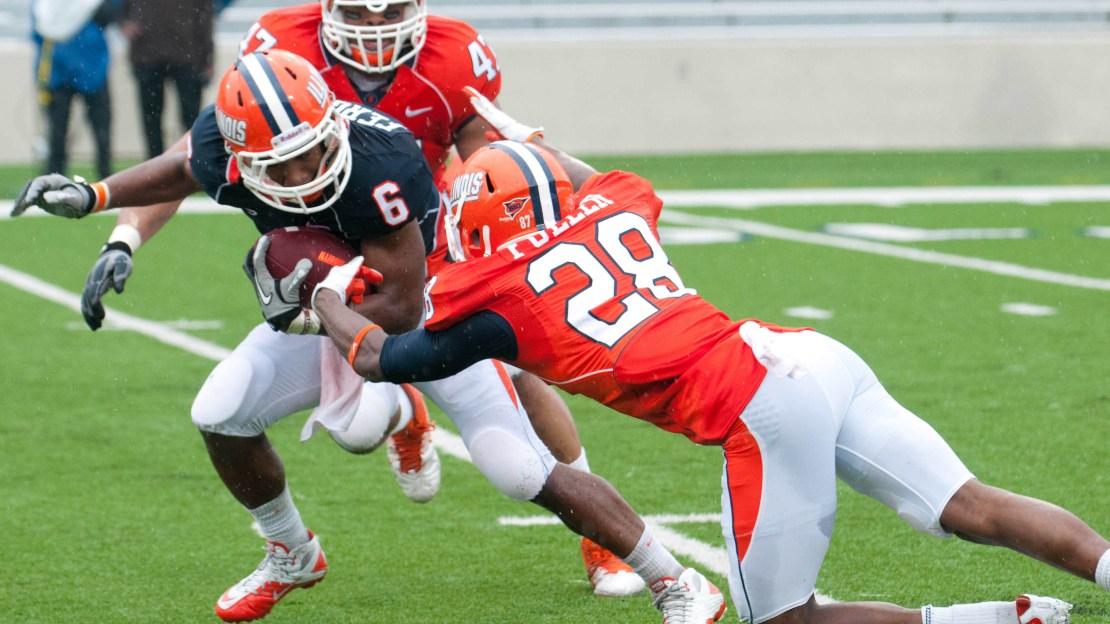 Spring football games broke out across Big Ten territory Saturday afternoon, with Illinois, Indiana, Iowa, Michigan, Northwestern and Purdue all in action. Weather played a big role all day, forcing the Hoosiers and Boilermakers inside and resulting in Nebraska canceling its game. Find out what I learned from Saturday's action in this post. Also, don't forget to check out our Big Ten spring roundup.

1. Indiana may have found a big-play maker in sophomore running back Isaiah Roundtree, a Morehead State transfer who has a different gear than guys like Stephen Houston and D?Angelo Roberts. Look for all of these players to be used more often in the passing game, too.

2. Iowa?s C.J. Fiedorowicz could be poised to emerge as one of the Big Ten?s top tight ends. At 6-7, he?s a giant target who, as a junior, is maturing into a standout now that he fully grasps things. And it showed today.

3. Purdue quarterback Robert Marve may be in line for a big send-off. Granted a sixth year of eligibility, Marve looked good today in hitting 14-of-24 passes for 134 yards, two touchdowns and a pick. That was much better than Caleb TerBush, who completed 8-of-20 passes for 109 passes with two touchdowns.

4. Michigan running back Thomas Rawls may have earned some carries in the fall with his hard, physical running style.

5. Northwestern quarterback Kain Colter will be pressed in camp by Trevor Siemian, who looked good on Saturday. He looked like a leader in driving the offense into the end zone on two occasions. The sophomore also showed poise in the pocket, hitting 8-of-14 passes for 119 yards and two touchdowns with no sacks.

6. How good can Illinois running back Josh Ferguson be? If the spring game is any indication, pretty darn good. The diminutive redshirt freshman showed a burst and the ability to make a play, running 13 times for 150 yards (with a 68-yard scamper) in the first half alone.

7. The Northwestern defense could be a force, as redshirt freshmen Chance Carter and Deonte Gibson were stars today. The bulked-up Carter put steady heat on Kain Colter and also picked off a pass that he ?took to the house.? Gibson notched two sacks.

8. James Morris made a statement today that he will be a leader on the Iowa defense. The junior upped his game and played with aggression. Good sign.

9. Illinois needs someone to bring the heat off the edge with Whitney Mercilus gone. That someone may be junior Mike Buchanan, who notched eight tackles and two sacks-in the first half. Yes, the guy could be good.

10. The Boilermaker secondary was supposed to be a strength. And it showed why. Corner Normondo Harris intercepted two passes, with one going for a score. And star corner Ricardo Allen picked off a pass and dropped another he would have scored on. Want more? Safety Max Charlot also intercepted a pass.

11. Purdue needs some tight ends to emerge. And Carlos Carvajal did that. The 6-7 freshman grabbed five passes for 32 yards and two touchdowns.

12. Iowa?s issues at running back are well documented. But sophomore Damon Bullock, who has switched positions a few times, showed some flashes today that he may be a reliable option in the fall.

13. Illinois star corner Terry Hawthorne showed he just may be viable as a receiver, grabbing a 29-yard scoring pass from Reilly O?Toole. Hawthorne may be a playmaker Tim Beckman is looking for.

14. Indiana JC transfer Cam Coffman has made it abundantly clear that he will push Tre Roberson for the starting quarterback job. Improved passing is a priority.

15. Playmakers are needed on the Iowa defensive line. Sophomore Louis Trinca-Pasat made a statement with a strong performance today. He?s an ?effort? guy, an undersized sophomore tackle who can shoot the gap.

17. Mother Nature is king ? or queen. And we all got a reminder today. Rain forced Indiana and Purdue to move their spring games indoors. Nebraska outright cancelled its game.