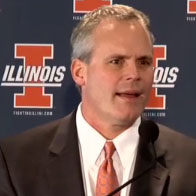 This is the moment Tim Beckman had been building for: To coach a Big Ten team. And the first-year Illinois coach knows the possibilities are huge, which is why he?s so excited. I recently spoke to Beckman about a variety topics as his first spring practice in Champaign was close to drawling to an end.

Beckman inherits a solid program from Ron Zook, who went 34-51 in seven seasons with three bowl bids. But consistency eluded Zook, who produced just three non-losing seasons. Beckman is looking for much more as he arrives from Toledo to take over a 7-6 team that?s coming off a win over UCLA in the Kraft Fight Hunger Bowl.

Beckman went 21-16 in three seasons at Toledo, including 17-7 record in conference play along with two bowls and a MAC West title in 2011. His teams were famous for having dynamic and high-scoring offenses, pacing the MAC and ranking eighth in the nation in scoring (42.2 ppg) last season. And the Rockets averaged 481.3 ypg to lead the conference and rank ninth nationally in 2011.

The 47-year-old Beckman, who graduated from Findlay College in Ohio, cut his teeth as a defensive coordinator at Bowling Green (1998-2004) and Oklahoma State (2007-08) before landing the Toledo job. He?s also familiar with the Big Ten, serving as defensive backs coach at Ohio State in 2005-06.

Watch the video from the day Illinois hired Beckman here and see what Beckman had to say about the 2012 Signing Day here.

Q: What were your thoughts on building staff?
A: The staff was built with people who I have been with at some point throughout my career. There are only three coaches who have not been involved with me prior to coming to Illinois. They have the same drive and accountability of creating the best student-athlete we can, which is something we always look for in hiring an assistant. Each one of these guys understands a little bit about me and I understand a lot about them.

Q: You have worked with some great coaches–Urban Meyer at Bowling Green; Jim Tressel at Ohio State; Mike Gundy at Oklahoma State. What did you learn from each coach?
A: Mike Gundy was very player-friendly. I have stated that before. He did a great job understanding what his players can do and relating practices and workouts to the success of those players. I learned how to respond to players well from him.

I don?t know if there are any words that can explain my thoughts for Coach Tressel. He has been a part of my family for a long time. My father played for his father. I just respect him, he?s very organized ? he does everything at a championship level. I learned so much in the year-and-a-half with him.

Urban Meyer is very organized. I have known him for a long time even prior to working for him. His best friend was also my best friend who was his roommate in college who now is coaching with the Browns-Bill Davis. Urban is very organized and very competitive, hopefully some of the same stuff I have. He does an outstanding job recruiting. He has done a good job at all his programs because he has won.

Q: When you took over Illinois, what was the first thing said to the team?
A: I told them this is a great opportunity. That I believe in family and I wouldn?t be here if it wasn?t for the Toledo Rockets and players and program that we built in three years and how fast we were able to do that. I?m not a ?me? guy. Our motto here is ?we, not me,? and ?the image of one is the image of all.? I stress those two quotes to this team.

Q: What about Illinois appealed to you?
A: First, it was the leadership. I know (athletic director) Mike Thomas has been very successful in the places he has been at, creating a championship atmosphere. When he was at Akron, they were champs. When he went to Cincinnati, they were champs. So, he?s proven guy who has won a lot of championships. Every one of those guys you mentioned (Meyer, Tressel, Gundy), I was on the phone with, and we talked about it, and also with my father. I thought being a Big Ten head coach and being at Illinois in a state that has great high school football and is real close to the third-largest city in America, you could have a great opportunity to win. And I have been blessed to be around winning, and I think that?s something that can be done here.

Q: Is there anything on your facilities wish list?
A: No question, the weight room, recruiting room, press box, all of those areas are outstanding. We have already talked about enhancing the size of the locker room and team meeting room, the training room facility-all things capable of being done here very soon and fast.

Q: What have been your goals this spring?
A: There is a competitive nature in everything we do here, from winter workouts to practices, we always are doing some type of competitive drills. I wanted to see the team compete, and compete at all levels. I think the fundamentals we always talk about, tackling, blocking, catching, running, kicking, are things we strived on doing this spring. And the knowledge of how we are going to practice, the speed and tempo we are going to practice, was something this team had to learn. And I think they have picked that up quickly and understand we are on the field to get better and we are going to be on a pace that stresses you physically and mentally.

Q: Is this a bowl team in 2012?
A: There are a lot of things that have to fall into place. Depth is a major concern. The ball has to bounce right, as they say, especially with the depth concerns we have.