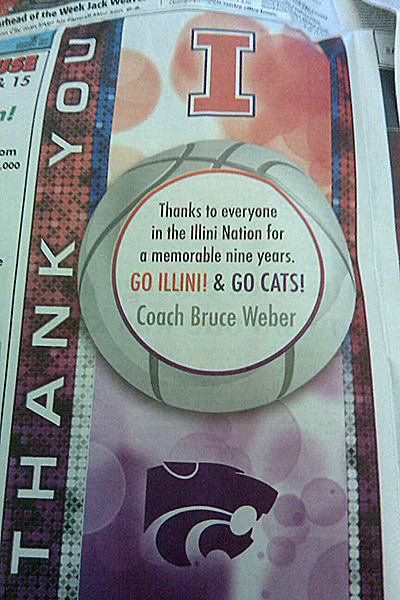 Former Illinois coach Bruce Weber took out a full-page ad in the Champaign News Gazette on Sunday to thank Illini Nation. The ad reads: "Thanks to everyone in the Illini Nation for a memorable nine years." It goes on to say: "Go Illini! & Go Cats! Coach Bruce Weber." The ad features the Illinois and Kansas State logos, separated by a basketball that houses Weber's aforementioned message. Weber was fired March 9 (story), one day after the Illini were eliminated from the Big Ten tournament, and hired at Kansas State on March 31 (story).

Weber spent nine years in Champaign and compiled a 210-101 overall record (.675 winning percentage). He led the Illini to the 2005 national title game, which they lost to North Carolina, but won only two NCAA tourney games following the 37-2 national runner-up finish. More troubling, Weber missed the dance in three of his final five years, including the 2011-12 season.

The ad is a nice touch by a classy guy. In fact, you almost expected it. Best of luck, Coach!