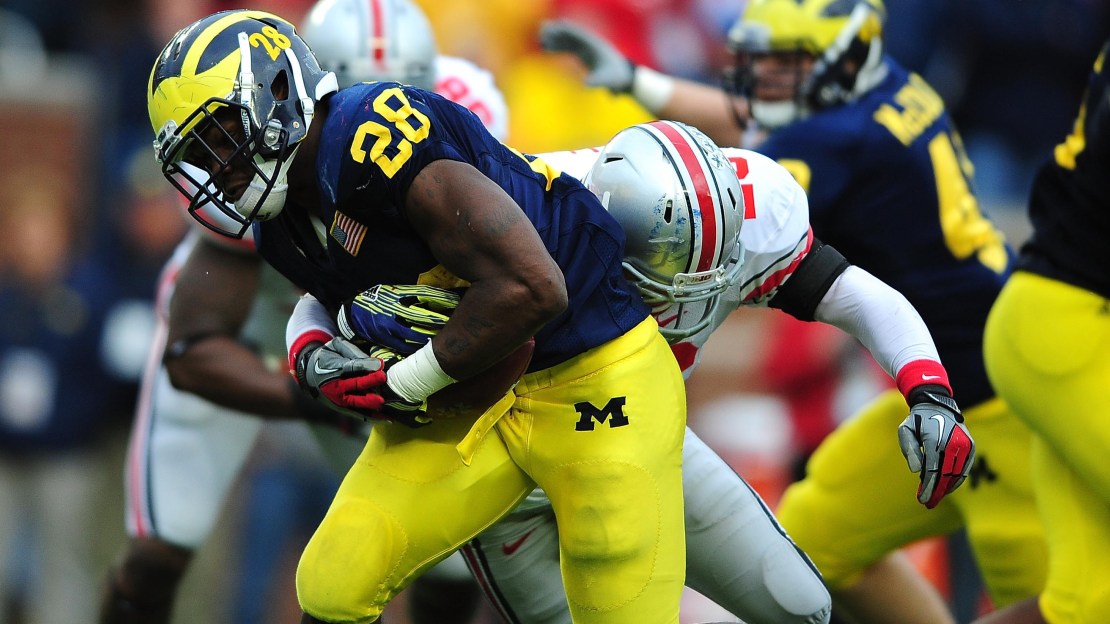 Ohio State big man Jared Sullinger announced he going to turn pro with two years of eligibility left. It was big news. But the fact the Buckeye offense still is trying to find its way under a new scheme is noteworthy, as well. Here are other key spring grid happenings today as well as my reaction to a handful of Big Ten tweets.

50-50: Mixed results with the new offense at Ohio State. The Buckeye defense has had the better of the offense thus far this spring, notes Doug Lesmerises of the Cleveland Plain Dealer. But, the defense should be excelling, right? After all, it?s the offense that?s learning a new scheme-not the defense.

?They'd better win," said Urban Meyer. "It's early yet. They're playing well and the defensive coaches are doing a nice job.

"I'd expect our offense to be a little bit more competitive right now. They're trying, they are.?

Meyer says he may ease up on installing some of the new offense to focus on the execution of the plays the Buckeyes know. But, as Lesmerises points out, the defense will not make it easy. And that?s good, because this is a Buckeye attack that has a lot to sort out.

Keep an eye on young offensive coordinator Tom Herman. He?s a rising star who did a great job in recent years at Iowa State working with much less talent. How will he do with a loaded deck in Columbus? I think very well.

Back it up: Now the man in the Michigan backfield, Fitz Toussaint maintains an all-business approach. What a year it has been for Toussaint, as Nick Baumgardner of AnnArbor.com points out. He began the year as an injury-prone question mark, but finished the season as one of Michigan's top offensive threats. Now the goal is to become a more well-rounded running back after becoming Michigan?s first 1,000-yard rusher since Mike Hart in 2007.

"He's got good hands," Wolverine offensive coordinator Al Borges said. "But we used (Vincent Smith as a third-down back to catch passes) so much in that capacity (last year), and I'd like for Fitz to equal what Vince did so we don't have to take him out all the time."

Smith is back for his senior season, along with sophomore Thomas Rawls and redshirt freshman Justice Hayes for a loaded running back corps that of course will be paced by Toussaint.

Spartan rising: Despite a cast, Michigan State?s Dion Sims is poised for a big season. The big fella is being counted on to come through at tight end for a Spartan squad that has lost tight ends Brian Linthicum and Garrett Celek. Sims, a junior, had 10 catches and three TDS over the first give games in 2011 before a broken wrist hampered him the rest of the way. He had surgery in February and is working hard this spring with that cast on his hand.

"I want to perfect my game all around," Sims told George Sipple of the Detroit Free Press. "Every day I'm coming in and just doing extra stuff to get better.

"I just want to be in the best shape possible, but those other guys work hard as well. It's only spring. You still have summer and then fall camp. I think we'll be ready to go."

New MSU quarterback Andrew Maxwell will need Sims-and some wideouts-to step up to keep the Spartan attack rolling in hopes of returning to the Big Ten title game.

Grab a helmet, bub: It?s time to discuss Iowa running backs, where everyone is in play. It was a big blow when running back Jordan Canzeri suffered a knee injury in non-contact work recently and underwent surgery. He was in line to start at the depleted position. There?s a chance he could be back at some point in 2012-but who knows with a knee injury, as Marc Morehouse of the Cedar Rapids Gazette points out?

?It?s just a matter of how quickly he can get back,? said Iowa coach Ferentz. ?We won?t go in with a set plan, we?ll just see how he goes and see how he?s doing. What?s most important is his welfare.?

So, for now, sophomores Damon Bullock and De?Andre Johnson move front and center with Canzeri out, combing for 99 yards rushing. In the fall, touted freshmen Greg Garmon and Barkley Hill will enter the equation. Stay tuned. This will be interesting.

?Basically, any first year guy who proves that he can help our team, we?ll give him that opportunity,? Ferentz said.

Safety matters: Senior safety P.J. Smith is doing his part to lead the Nebraska secondary. He will need to be for the Cornhusker secondary to be as good as coach Bo Pelini thinks it can be.

?Our secondary, I think, is night and day at this point from where we were last year," Pelini told Brian Christopherson of the Lincoln Journal Star.

That?s vital, because the Husker defense has room for improvement in 2012 as it searches for playmakers with the likes of cornerback Alfonzo Dennard, linebacker Lavonte David and tackle Jared Crick gone.

Hands on: Tony Jones is back in the mix at receiver at Northwestern. And this is big, as Tina Akouris of the Chicago Sun-Times points out. Jones was looking toward a breakout 2011 as a sophomore but suffering a season-ending injury in camp. Now, he?s part of what could be one of the better receiving corps in the Big Ten this fall.

?To have Tony back in the mix, he played for us as a true freshman, and that was impressive,? said Northwestern coach Pat Fitzgerald. ?I don?t think he?s tentative. It?s different, running and getting in shape compared to getting hit and getting in shape.?

In addition to Jones, the Wildcats will feature Demetrius Fields, Christian Jones and possibly USC transfer Kyle Prater, if he is granted a waiver to play this fall.

?I?m trying to be modest, but I think that this wide-receiver unit has the ability to be the best in the Big Ten or in the country,? Jones said. ?We have a lot of guys to be excited about.?

PSU S Malcolm Willis: We've all gotten more explosive (as a result of strength and conditioning in offseason).

My Take: This is important, as several people have told me new strength and conditioning coach Craig Fitzgerald is overhauling the program. And the results look like they are beginning to show. Fitzgerald preaches more free weights and getting rid of the exercise machines. These strength coaches are the most underrated-if not important-members of every coaching staff.

PSU WR Justin Brown on new playbook: "It's a lot more stuff. … The past playbook was kind of simple, but this one's a lot more creative."

My Take: Not surprised, considering Bill O?Brien comes from the NFL, where playbooks are as fat as the New York City white pages. A bigger issue: Do the Nits have the players to make all of those fancy Xs and Os work?

Mattison "in all my years of coaching I'll never forget (last year's defense) ever" but he likes this group, how "eager" they are

My Take: Nor should he. The complete and utter transformation of the Wolverine defense from a sieve under Rich Rodriguez to a representative unit under Greg Mattison and Brady Hoke was one of the most remarkable-and surprising–happenings of the 2011 season.

My Take: Hey, it?s all about getting a grip, as Marve enters Year Six. (Yes, Year Six!). Hey, gloves worked great for Kurt Warner. Why not Marve?