Roundtable: Breaking Down The Wildcats 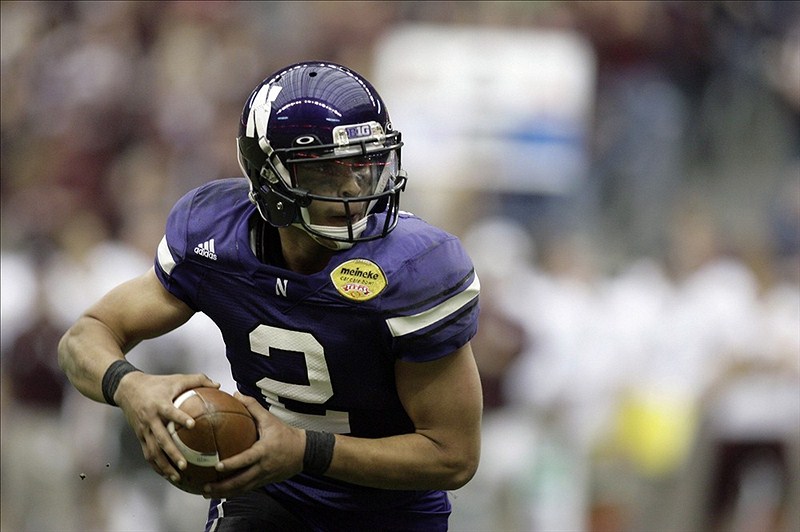 It is four straight bowls (Alamo, Outback, TicketCity, and Meineke Car Care) and counting for Northwestern under Pat Fitzgerald, but he?s still looking to sip from the postseason championship cup as he enters his seventh season in Evanston. It could happen this year, if the Wildcats can answer some key questions this spring.

Priority No. 1 is to upgrade a defense that last season ranked 11th in the Big Ten overall (407.7 ypg), 12th vs. the pass (230.4 ypg) and 10th against the run (177.3 ypg). What are the issues? The offense doesn?t have as many pressing needs as the defense, but quarterback Kain Colter must show he?s a better passer and begin to emerge as a leader. I talked to three writers who cover the Wildcats to get their thoughts on what Fitzgerald and Co. need to concentrate on this spring. Read my previous Big Ten Roundtables right here. I'm doing one for each Big Ten football team.

Teddy Greenstein, Chicago Tribune | Follow @TeddyGreenstein on Twitter
"Northwestern needs to generate pressure from the front four. The Wildcats registered just 17 sacks in 13 games, fewest in the Big Ten. Fitz has had praise so far for linemen Tyler Scott and Brian Arnfelt, who told reporters after the team ran 85 plays Saturday: ?This whole season is about responding to what happened last year. It's really about redemption. We looked at the film (of last season) and just said, 'You've got to strive to be the best you can. You can't accept mediocrity.'?

"The secondary also needs work. The Wildcats actually had two good senior starters in Jordan Mabin and Brian Peters, plus the athletic Jeravin Matthews, who had switched positions from receiver and then running back. But even with three vets, the DBs sometimes didn?t know if they were supposed to be in zone or man coverage. NU gave up huge, killer plays to Illinois, Penn State and Iowa. The players and coaches took part in special communication exercises during winter workouts to stress the need to be on the same page."

"And keep an eye on the o-line. The Cats gave up 43 sacks last season - second worst to ? Ohio State (wow) - and lost a terrific left tackle in Al Netter. Part of that big number is a function of having a running quarterback, and Dan Persa frequently held onto the ball too long. But still ?"

Tina Akouris, Chicago Sun-Times | Follow @takouris on Twitter
"They need to really work on the defense. It was a huge problem in the bowl game. And it was a huge problem during their five-game losing streak. There was a communication issue between the coaches and some of the players. Some guys like Jordan Mabin and Brian Peters in the secondary and Bryce McNaul at linebacker are gone. But those left and coming in need to work on better communication on defense. That will be key. With Peters and Mabin graduated from the secondary, they need to find a couple guys who are really going to be confident and who will be leaders. That is a huge concern, leadership."

"On offense, it looks pretty good. Quarterback Kain Colter is taking ownership of the team with Dan Persa graduating. It?s no surprise to anyone that Kain is the guy. In terms of strengths, Mike Trumpy is sitting out spring drills, but he will be back from his torn ACL in the fall. The running backs look pretty decent. At receiver, Tony Jones is back from his knee injury he suffered early last year. If Kyle Prater?s waiver goes through, he has shown a lot already. He is huge, 6-5, and has a long wingspan. I covered him in high school at Proviso West. It looks like he may have grown an inch or two since then."

"(Guard) Brian Mulroe is back on the offensive line. At center, they have rising sophomore Brandon Vitabile. He really did well last well as a freshman. He surprised a lot of people playing a key position on the line. Even though he?ll just be a sophomore, he needs to take that leadership role on the line."

Chris Emma, PurpleWildcats.com, Northwestern FOX Sports and Scout.com site | @NUScout
"The biggest issue is figuring out where these young guys fit in, especially on the defensive side of the ball. Linebacker is a key position, they lost two seniors. They have a redshirt freshman and a sophomore and junior looking to play. That is issue No. 1. Bottom line: The defense needs to be shored up overall. Who can jump in and be a playmaker?
On offense, can Kain Colter become the guy and leader at quarterback? He has put in on himself to take charge and be a leader. Not only can he lead the offense on the field, but off the field, as well. He has to be the guy, so that?s a major issue to watch for."

"Tony Jones said recently he thinks Northwestern could have the best group of receivers in the Big Ten. I think that?s assuming Kyle Prater will be granted his waiver, and I think he will be. Jones was out all last season, which hurt. He was a great player as a freshman. Add Prater to the mix … Christian Jones was a freshman last year who had a few big catches in limited time and will see more action. Demetrius Fields is a senior who finally maybe the guy after being buried on the depth chart. Rashad Lawrence is just a junior and he really has been impressive this spring. This is a group that could be pretty good."

"Running back Mike Trumpy is out this spring but the hope is he?ll be back in the fall. He has been so injury-riddled, it has been hard to depend on him. I think they are hoping freshman Malin Jones can come in and assume a big role because they are lacking. Treyvon Green also will have to do a little more. And Trumpy must be healthy. But Jones is that guy who could be a 1,000-yard rusher."