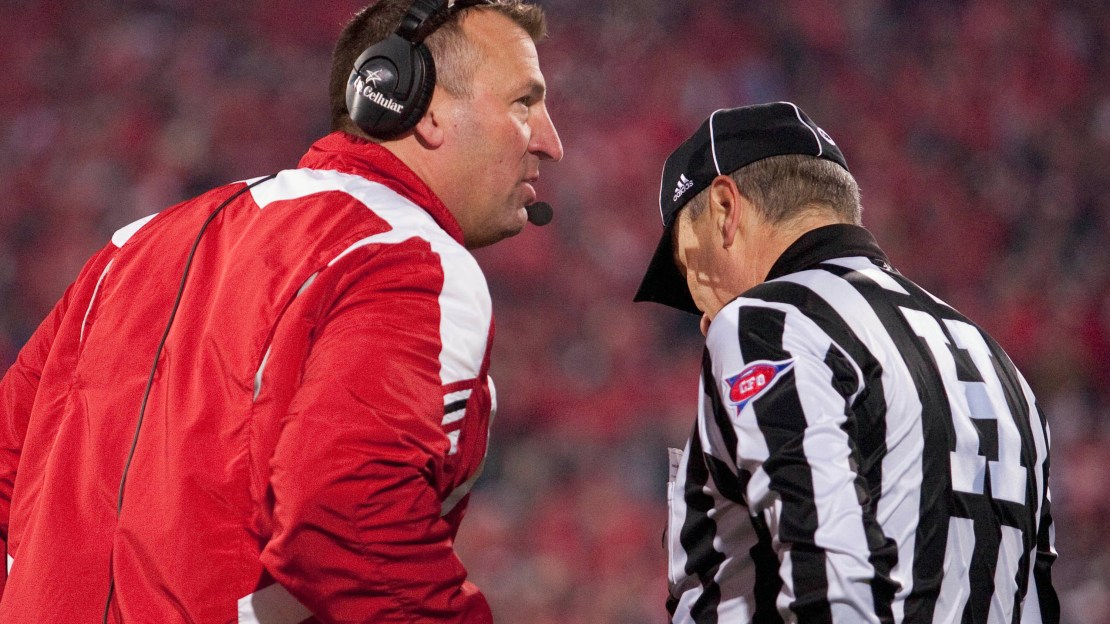 Big doing today, as the Danny O?Brien sweepstakes have ended with the Maryland quarterback picking Wisconsin. This is two years in a row the Badgers will welcome an ACC QB transfer. Russell Wilson from N.C. State worked out pretty good. If O?Brien is anywhere close to Wilson, 2012 will be a fun year in Madison. Fire up the grill and open the brats! Find more on that and other happenings in this post.

PLENTY TO SMILE ABOUT: If you see Bret Bielema smiling today, here?s why: The aforementioned O'Brien has committed to the Badgers.

The Badgers have a gnawing void under center with Russell Wilson gone after leading Wisconsin to a second consecutive Rose Bowl. O?Brien-who also visited Penn State and Ole Miss–would be expect to jump right into the starting lineup for a Badger quarterback situation that is rife with inexperience and injury.

O?Brien?s addition also means the Badgers are the overwhelming favorite in the Leaders Division. Yes, Wisconsin will miss wideout Nick Toon and three offensive line starters, but running back Montee Ball is back. And the defense returns a strong corps of players led by linebackers Chris Borland and Mike Taylor. Plus, the rest of the Leaders Division is in some flux.

Ohio State is ineligible for the division crown and a bowl; Illinois and Penn State are breaking in new coaches; Purdue and Indiana remain works in progress. Bottom line: Don?t be shocked if Wisconsin is back in Indianapolis for the Big Ten title game a second year in a row.

SOMETHING TO CONSIDER: How well will Bill O?Brien?s version of the New England offense fit Penn State? Bob Flounders explores.

Well, the Nits have two big problems in hoping to be Patriots Light. 1.They lack an elite quarterback. 2. The tight end slot-a huge part of New England?s attack with Rob Gronkowski and Aaron Hernandez–has been a void for several years in State College. Still, O?Brien is undeterred.

"Obviously, the last two years in New England taught me a lot about the use of a tight end, multiple tight ends," O'Brien said Monday before practice.

"What people don't understand, in New England, a lot of times we used three tight ends. In 2010, we had Aaron [Hernandez], Rob [Gronkowski] and Alge Crumpler. The more you have, the more difficult it is on a defense. … We're going to have two tight ends in there and at the very least one tight end in there the majority of the time."

The good news for the future: Penn State has a commitment from what many consider to be the top tight end in the nation, as well as a pledge from a highly touted quarterback.

"I just think I need to be myself," said Maxwell, a junior. "If I try to be Kirk's replacement, I'm not being myself. I'm not being the guy people have known in the locker room going on four years now. From the day I walked on campus, I tried to build a relationship with guys and establish myself as a leader. So if I try to be somebody I haven't been, that's not going to translate well in the locker room."

Maxwell is supposed to be good. And he?ll need to be working with an overhauled receiving corps that has lost B.J. Cunningham, Keshawn Martin and Keith Nichol.

TALENT UP FRONT: Speaking of Michigan State, it FINALLY has depth along the offensive line. In fact, perhaps for the first time in Mark Dantonio?s tenure, the o-line is a strength. According to Joe Rexrode?s story in the Lansing State Journal, six starters are returning. That?s technically the case even though Joel Foreman is gone after four years of starting at left guard - because everyone else is back and two early-season 2011 starters are now back from injuries suffered in the third game at Notre Dame.

"Of course everybody has expectations," Campbell said before making an admission. "And no, I don't think I've met my expectations."

This is the senior?s last shot. And he?s being counted on to fill Mike Martin?s massive void on a defensive line that losses three starters after being a major strength in last year?s surprising run to the Sugar Bowl title.

DEFENSE TO OFFENSE: The Huskers are tapping defense to find a center, says Jeff Sheldon of the Omaha World-Herald.

"D-linemen tend to be more athletic than O-linemen, so we love switching D-linemen to O-linemen," Cotton said. "Defensive guys generally have pretty good feet. They usually play with their hands inside, which a lot of times offensive linemen don't. They know how to play with pretty good leverage, so it's not a hard transition physically. The hardest transition is mentally."

Caputo is one of several great Big Ten centers who must be replaced this fall. Others: Michigan?s David Molk, the Rimington Award winner; Ohio State?s Michael Brewster; Wisconsin?s Peter Konz. All three project as top center prospects in the NFL draft.

My TAKE on TWEETS
Steven M. Sipple of HuskerExtra.com:

My take: Another trophy? OK, I guess I am in. I think college football hands out more trophies than any sport-even hockey. And that?s saying something. But, now that I think about it, we still need a trophy for long snappers and holders.

Mark Snyder of the Free Press:

My take: Snyds has it right, as I said above. Wisconsin was gonna be the fav in the Leaders before O?Brien transferred. Now, Bucky is the HUGE fav to win the division pennant-again. Book those reservations for Nap Town. I recommend The Conrad on Washington Ave.