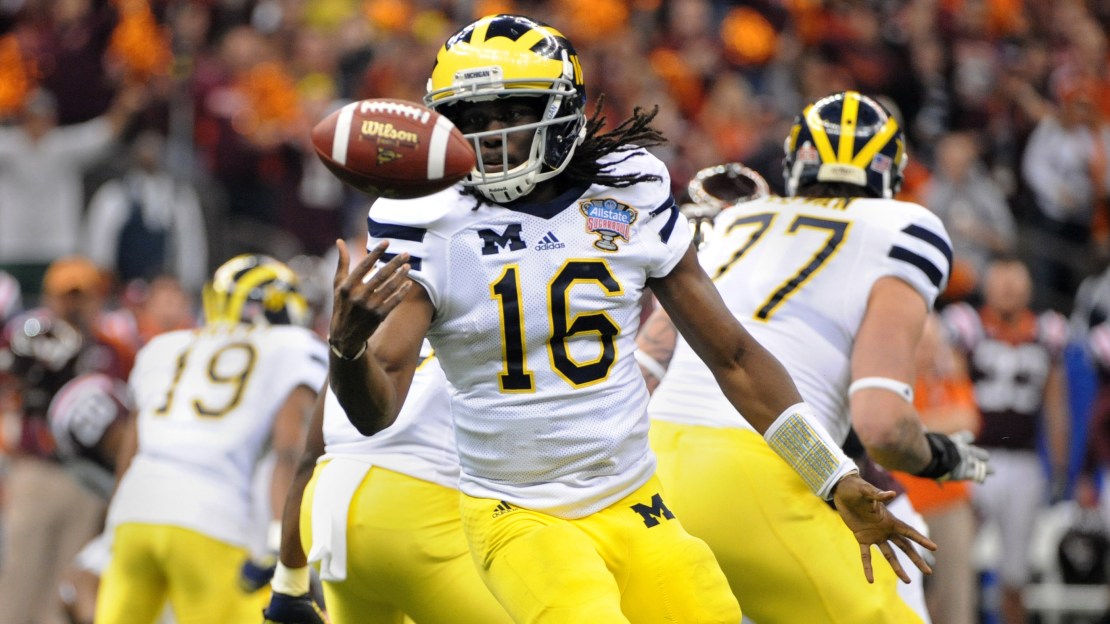 Who's battling for the the left tackle spot at Iowa? How has Michigan's Denard Robinson improved since last season? Can Purdue's Ralph Bolden hold up? I found some great stuff from the beat writers in the Big Ten today, so come have a look. I'll continue to track updates from around the Big Ten during this spring football season in my Football Fix posts.

For instance, here's another good question: Does Penn State have some young players who are ready to be difference makers? Bob Flounders of The Patriot-News writes about this. Keep an eye on cornerback Adrian Amos and Bill Belton, a receiver-wildcat quarterback who is being moved to running back. Amos is a big (6-1/210), physical corner who impressed when pressed into duty last season.

Belton could be deadly using his speed in open spaces for an offense that needs some pizzazz after ranking 10th overall (342.4 ypg) and 11th in scoring (19.3 ppg) last year in the Big Ten. I have to think Bill O?Brien?s fertile mind will make this Nittany Lion attack better.

OPEN SPOT: Iowa starting offensive tackles Markus Zusevics and Riley Reiff are gone. The last time the Hawkeyes didn?t have a returning starting tackle was 2007, as Marc Morehouse writes in the Cedar Rapids Gazette. And that year, Iowa yielded 49 sacks. Uh-oh. Who will battle at the key left tackle spot? Sophomores Brandon Scherff and Andrew Donnal. Stay tuned. This unit will be watched closely, as new line coach Brian Ferentz-yes, Kirk?s son-take over.

THROWING IT: Michigan senior quarterback Denard Robinson is impressing with his quick-trigger passes, writes Angelique S. Chengelis in the Detroit News. There wasn't any doubt I thought there was a marked improvement in some areas with throwing, decisiveness, good decision-making and those things," Michigan coach Brady Hoke said. What's been the biggest difference in Robinson's game? "Decisive with his throws," Hoke said. D-Rob needs to cut down on his Big Ten-high 15 interceptions and improve his 55 percent completion percentage.

LINE SHIFTS: Michigan is hoping for a bulked up Craig Roh as he moves from weak- to strong-side defensive end to replace Ryan Van Bergen, according to Nick Baumgardner over at AnnArbor.com. Roh isn?t the only one moving on the Wolverine d-line. Former end Jibreel Black has moved to defensive tackle. Like Roh, Black will have to bulk up. Look for Frank Clark and Brennen Byer to battle for Roh?s old spot.

Will Campbell and Quinton Washington also must come on in the interior for a unit under scrutiny with Mike Martin and Will Heininger gone in addition to Van Bergen. This was a Michigan defense that made great strides in 2011, ranking No. 4 defense in the Big Ten (322.2 ypg) overall and No. 2 in scoring defense (17.4 ppg). To continue to grow under coordinator Greg Mattison, the line must develop to protect a strong group of linebackers.

GOPHER OPENER: Minnesota has a warm and effective start to spring drills, as the Star Tribune's Phil Miller reports. "I didn't have to yell and scream to get them to hustle and get into place," said Jerry Kill, who begins his second season. "The ones who have been here are a little more comfortable in what they're doing."

That?s good. Who impressed? Defensive end Scott Ekpe, quarterback Max Shortell, running back James Gillum, among others. There is lots to work on. No. 1: improve the defense. The Golden Gophers finished 11th in rushing defense (186.4 ypg), ninth in pass defense (216.7 ypg) and 10th in the Big Ten (403.1 ypg). Areas of focus will be the line and secondary.

BANGED-UP BADGERS: I read in the piece by Tom Mulhern at the Wisconsin State Journal that Wisconsin started spring drills without wideout Jared Abbrederis and tight end Jacob Pedersen. Abbrederis has a foot issue and will be out at least four or five more weeks, while Pedersen has a groin injury and will miss at least two weeks.

BOLDEN UPDATE: It?s three injuries to the right knee and counting for Purdue senior running back Ralph Bolden. After reading this story from the Purdue Exponent, you wonder if Bolden will he hold up this season? He better. The Boilermakers need Bolden, who first hurt his right knee in high school; then in 2010 spring drills, which caused him to miss the season.

Bolden then hurt the knee in the 2011 regular-season finale at Indiana. He clearly is the team?s best back, running for 1,637 career yards and 15 scores. Other options are former JC transfer Akeem Shavers and sophomore Akeem Hunt. Bolden led the team with 674 yards in 2011; Akeem Shavers had 519; Akeem Hunt had 287. Everyone else is unproven.