Read up on Tuesday's football links 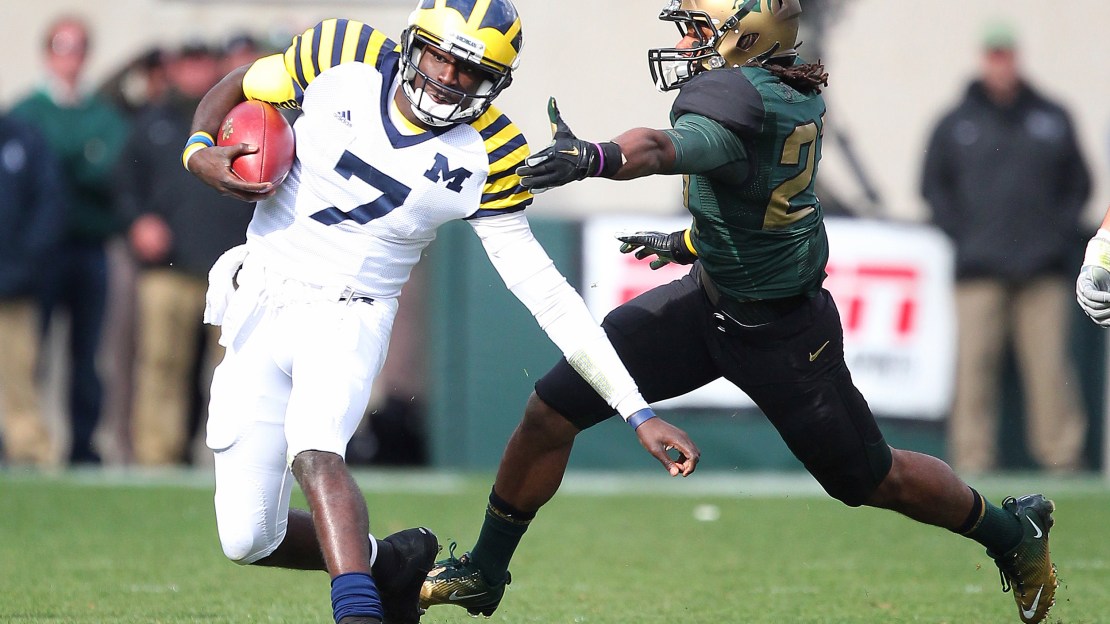 With spring practice underway, BTN.com senior writer Tom Dienhart is scouring the web for the best Big Ten football headlines. Tuesday's links include a story about Devin Gardner's possible expanded role, Nebraska's desire to extend its recruiting footprint south and an update on Penn State's quarterback battle, among other things. Get all the links, plus Dienhart's take, in this post.

Michigan quarterback Devin Gardner is contending for an expanded role this spring. Where? It remains to be seen. Many think the uber-talented Gardner may find his way to receiver in an effort to get him on the field. And the Wolverines need help at wideout. Roy Roundtree and Jeremy Gallon figure to fill two spots. But a third is needed with Junior Hemingway gone. Offensive coordinator Al Borges showed last year he?s willing to experiment, getting Gardner-rated the No. 1 dual-threat quarterback coming out of high school–on the field in concert with Denard Robinson last season in a ?deuce? formation. And Borges has hinted that he will use the formation again-and maybe even more. But he notes: ?practices are closed for a reason.?

At Penn State, it?s the same question at quarterback: Will it be senior Matt McGloin or junior Rob Bolden? Or, is sophomore Paul Jones an option? Penn State still is in the running to land Maryland transfer Danny O?Brien. And in the fall, freshman Steven Bench arrives. New quarterbacks coach Charlie Fisher says each will get a ?clean slate.? Whoever wins the job must improve a moribund passing game that ranked ninth in the Big Ten last year (177.0 ypg) if the Nits want to be a factor in a jumbled Leaders Division.

Nebraska?s spring roster is taking shape. Good thing, because this is a critical spring for Bo Pelini, as he begins his fifth season in Lincoln still looking for a conference championship and BCS bowl appearance. The chief tasks being worked on as I type this are developing depth on the offensive line and at running back. Plus, the defense needs star power and playmakers with cornerback Alfonzo Dennard , Jared Crick and Lavonte David gone. The staff also wants to see quarterback Taylor Martinez become a better passer. The Huskers are competing in the tough Legends Division, so making strides this spring is critical to keep pace with the likes of Michigan, Michigan State and Iowa.

Speaking of Nebraska, new secondary coach Terry Joseph vows to leave no stone unturned in his quest to push the Cornhuskers? recruiting footprint into the Deep South, telling the Omaha World-Herald:

Joseph, who has six offers out to touted Georgia prospects, knows the terrain, coming to Lincoln after working the south as Tennessee?s recruiting coordinator. Nebraska knows it?s all about talent and stretching your boundaries to acquire it if the Huskers hope to reach the Big Ten summit.

Should Penn State rename Beaver Stadium in honor of the late Joe Paterno? A poll of registered Pennsylvania votes was recently released and shows most are in favor of doing so. The Quinnipiac University poll showed 46 percent in favor and 40 against.

Just a year ago, it would have preposterous to think there would have been any dissent with bestowing that honor on JoePa. But the university, state, nation and college football world are still seemingly struggling on how to come to grips with Paterno?s legacy in the wake of the child sex abuse scandal involving former assistant Jerry Sandusky. I have a feeling if we wait even longer, we will see more people be in favor of the honor for Paterno. Time has a way of softening things.