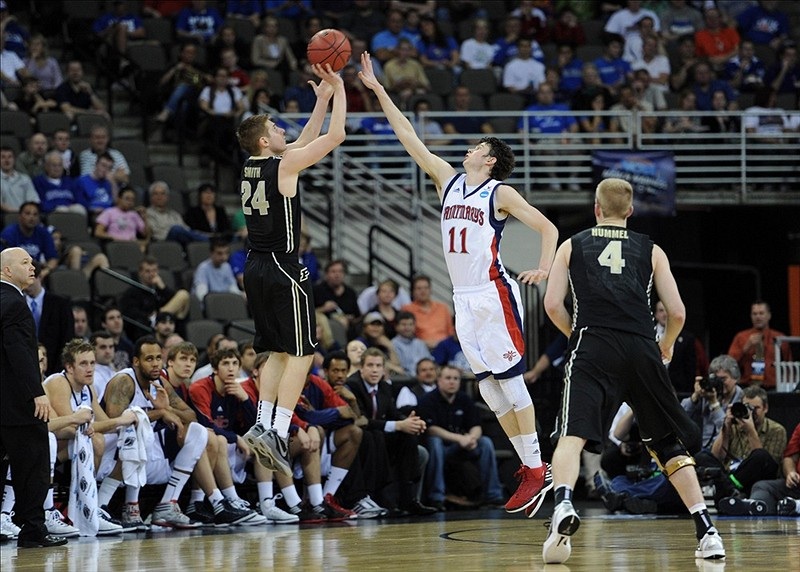 Ohio pulled out a stunning 65-60 upset over Michigan in the first of three Friday night games involving Big Ten teams. Purdue dropped St. Mary's 72-69 in a day of upsets at the NCAA tournament. In the late game, Draymond Green recorded a triple-double to lift Michigan State to an 89-67 win over Long Island. In my daily links in this post, I found some interesting takes on Indiana's win as well as what lies ahead for Purdue and Michigan. And did you hear what Bill Self said about the Illinois program? Dive on in.

Plus, here are times and TV info for Saturday's games. Also, BTN.com?s Big Ten Geeks take a look at the Big Ten openers with a preview of Friday-Sunday here and another preview of Friday-Sunday here. Best place to find a bracket? NCAA.com. Best place for TV coverage of Big Ten teams? ?Big Ten Basketball and Beyond: Tournament Edition? on TV. Get TV show details here.

Upsets are rare, but they always lurk, says Bob Hunter of the Columbus Dispatch. And upsets have been ever rarer in this year?s tourney; but we?ve played only one day. The ?upsets? from Thursday: No. 11 Colorado beat No. 6 UNLV; No. 12 VCU topped No. 5 Wichita State. That was it. Hardly earth-shaking ?Bucknell over Kansas? in 2005 kinda stuff. But, again, perhaps today we will get some jaw-droppers that we never will forget. Some of my all-time favs: Princeton over UCLA in 1996; Valpo over Ole Miss in 1998; Indiana State over Oklahoma; Santa Clara over Arizona in 1993; Hampton over Iowa State in 2001; Coppin State over South Carolina in 1997. Oh, I could go on. It?s the upsets that we remember-and are what make the NCAA tourney the greatest sporting event in this galaxy.

Now it gets interesting for the Hoosiers, writes Bob Kravitz of the Indianapolis Star. The ease with which Indiana dispatched New Mexico State surprised many people. Now comes a game vs. VCU on Saturday, which should be one of the better games of the weekend. The Hoosiers must deal with the pressure and frenetic pace that Shaka Smart?s Rams set on the defensive end. Indiana?s guards will have to be on their A game, handling the ball and the pressure. If the Hoosiers beat No. 12 VCU, a rematch with No. 1 Kentucky likely looms in the Sweet 16. And the Wildcats have to still be stinging from losing to Indiana on at last-second shot by Christian Watford back in December, the highlight of which has been played over and over again on ESPN.

Matt Painter is in Omaha with Missouri, the school he almost left for last spring, writes Vahe Gregorian of the St. Louis Post-Dispatch. Remember how close Painter came to leaving for Mizzou? In fact, some media outlets reported that Painter had taken the job. Now, almost a year later, Painter and Missouri are both in Omaha, Neb., prepping for NCAA tourney games. Would the Tigers be a No. 2 seed if Painter was the coach? It?s fun to speculate, but one thing Painter has made clear: He?s happy for Mizzou and coach Frank Haith. The No. 2 Tigers may be a Final Four team, possibly meeting No. 1 Michigan State with a trip to New Orleans on the line out of the West Region. Purdue? If the No. 10 Boilermakers beat No. 7 St. Mary?s today, it will be an upset.

Tim Hardaway Jr., and Evan Smotrycz have improved after midseason struggles, writes Michael Rosenberg of the Detroit News. And this is vital, as each must have a hot hand if the Wolverines hope to enjoy a deep run in March. How long has it been since Michigan advanced past the second round of the NCAA tourney? You have to go back to 1994, when the Wolverines fell to eventual NCAA champ Arkansas in the regional finals. This is just the program?s fifth Big Dance appearance since then. Michigan needs to be on upset alert vs. Ohio. If the Bobcats are hitting their 3-pointers, this game could get very interesting. Ohio coach John Groce is a former Thad Matta assistant whose team likes to play at a quick pace and excels at forcing turnovers. Michigan must shoot well, and have Trey Burke invade the lane early and often.

Bill Self believes you can win big at Illinois, writes Tom Davis of the Ft. Wayne News-Sentinel. The Kansas coach didn?t stick around long enough to really find out, but he did leave Bruce Weber a mega-talented roster that got to the NCAA title game in 2005. You remember Deron Williams, Dee Brown, Luther Head, James Augustine and Co., right? And Lou Henson got Illinois to the Final Four in 1989 with the Flyin? Illini led by Stephen Bardo, Nick Anderson, Kendall Gill, Marcus Liberty, Kenny Battle and Lowell Hamilton. So, yes, Self is correct, you can win big in Champaign. And that makes this job attractive. Are you listening, Shaka Smart?

OTHER LINKS OF NOTE
Illinois
Dave Dawson of the Decatur Herald-Review offers the anatomy of the paper?s premature post about Bruce Weber?s ouster.

Iowa
Eric May is happy to help any way he can, writes Pat Harty of the Iowa City Press-Citizen.