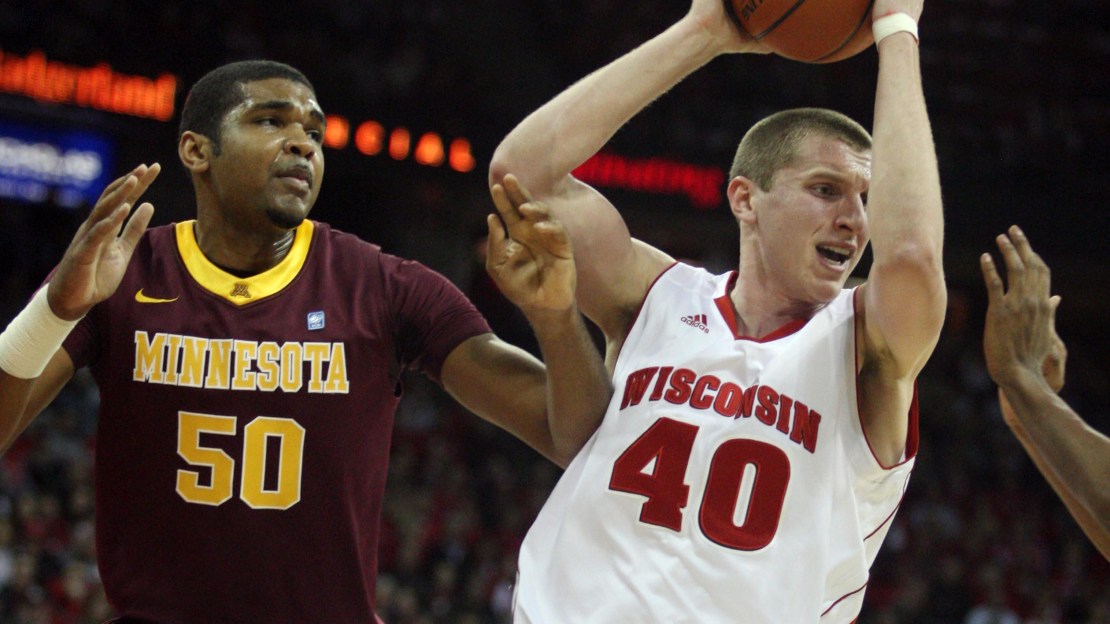 The NCAA tournament officially tipped off Tuesday night, as did the NIT, which has BTN.com web editor Brent Yarina's attention divided between the tourney and the future. It's very early to entertain the 2012-13 season, admittedly, but there are important questions Big Ten teams will address, as soon as the coming days or weeks.

See Yarina's top 10 questions facing Big Ten basketball teams in this post. Have a different one? Leave it as a comment at the bottom of the post. And don't forget to watch our Big Ten Basketball Images of the Year feature.

1. How does Michigan State replace Draymond Green?
Green brought so much to Michigan State throughout his brilliant four-year career. From leadership to his ability to serve as a point-forward, Green was a rare weapon that developed into a star on both ends of the floor. Without him in 2012-13, the Spartans lose so much more than production. His intangibles are mentioned all the time — perhaps too much — but the season he had this year for a team that entered the season unranked and with little, to no, experience says a lot about the guy. Who will replace him, both on and off the court? Keith Appling is an easy choice, although Branden Dawson could be the man, assuming he has no setback in his return from a torn ACL. And then there's the Derrick Nix-Adreian Payne duo that is improving at a rapid rate. Come to think of it, maybe it will be a replacement-by-committee.

2. What will the Buckeyes look like?
Ohio State has made a permanent home atop the Big Ten recently, winning at least a share of five of the past seven Big Ten regular season championships. But with William Buford gone and Jared Sullinger and Deshaun Thomas possibly entertaining the NBA, Ohio State could look a lot different in 2012-13. If Sullinger and Thomas leave — it's not a guarantee — the Buckeyes would enter the season with a ton of inexperience, other than Aaron Craft at the point and Lenzelle Smith as a glue guy. Good thing Thad Matta can recruit with the best of them.

3. Will Trevor Mbakwe return, and if so, will he be the same guy?
Minnesota's double-double machine played only seven games this season before he tore his right ACL in November. Mbakwe will be 24 in January, but he seems to be interested in exploring a possible medical redshirt. If he receives it, and reports indicate he should, he will be welcomed back with open arms. Put a healthy Mbakwe around a team that includes Rodney Williams, the Big Ten's most athletic player, and a young nucleus headlined by Big Ten tourney breakout performer Andre Hollins, and the Gophers could be a surprise team. Then again, that's assuming Minnesota stays healthy, and that hasn't exactly been very common under Tubby Smith.

4. How much will Indiana improve?
Everyone from Indiana's starting lineup is expected back in 2012-13; in fact, the only guaranteed significant departures are Verdell Jones and Tom Pritchard. Matt Roth, arguably the Big Ten's best 3-point shooter, could be lost, as well, if Indiana doesn't opt to give him a scholarship offer in his final season of eligibility. Either way, with Cody Zeller, Christian Watford, Jordan Hulls, Victor Oladipo and Will Sheehey all back, in addition to one of the nation's top recruiting classes, Indiana should be better. How much better? One thing's for sure: Indiana won't replicate its 13-game improvement from this season — that would put them at 38 wins. With another year of seasoning and the addition of a few of Zeller's AAU buddies, though, it's not that crazy to think Indiana will enter the season as the Big Ten favorite.

5. Sans Jordan Taylor, will Wisconsin remain a contender?
Since 2001, Bo Ryan's first season in Madison, the Badgers have never finished lower than fourth in the Big Ten. It's one of the crazier stats out there, really. What does it mean? That no player is more important than the system. Great players leave Wisconsin, from Alando Tucker to Devin Harris to Jon Leuer, to name a few, and the Badgers always remain a Big Ten contender. While Taylor was as big of a part of the Badgers as any Wisconsin star before him, it's never easy to replace a point guard, let alone one as featured as Taylor. But, if history is any indication, someone like Ryan Evans or Jared Berggren will become the new leader/star. The system and the role players are there, so it will be all about developing that seemingly annual new star.

6. How will new coaches impact impact Illinois, Nebraska?
Illinois is the bigger question here, because the Illini are the team closer to being competitive. And if the new coach can convince Meyers Leonard to stay another season, Illinois would have the personnel to go dancing in 2012-13. Even if Leonard isn't around, Illinois boasts young talent for the new coach. As for Nebraska, it loses four of its top six scorers from a team that went 12-18. Next year is going to be a rebuilding year in every sense of the word in Lincoln. But with the new arena set to open for the 2013-14 season, the new coach's biggest task may be off the court, aka recruiting.

7. Is Iowa ready to become a  Big Ten contender?
Very few experts had the Hawkeyes penciled in to be playing after the Big Ten tourney. Well, in Year 2 under Fran McCaffery, Iowa is in the NIT. It isn't the NCAA tourney, sure, but the Hawkeyes are ahead of schedule — so much so that the real tourney should be the expectation next season. As big of a loss as Matt Gatens is, Iowa has plenty of young talent, headlined by the underrated Aaron White, and is about to welcome a highly regarded recruiting class. The key will be Melshan Basabe, who needs to start playing the way he did as a freshman, and Josh Oglesby, who will be expected to stretch the floor the way Gatens did four years.

8. Which current freshman will make the biggest strides?
The 2011-12 freshman class was nothing short of terrific. Indiana's Cody Zeller and Michigan's Trey Burke received most of the fan fare, although Iowa's Aaron White, Michigan State's Branden Dawson, Minnesota's Andre Hollins and Northwestern's Dave Sobolewski also compiled strong first campaigns. While Burke and Zeller deserved the All-Big Ten second-team honors they received earlier this month, they're already the stars of their team. The other four players, however, will receive more responsibility and a bigger role next season. Don't be surprised if White becomes one of the Big Ten's better players, right up there with Burke and Zeller.

10. Where do the Boilers go post-Robbie Hummel?
Purdue is no stranger to being without Hummel, but now it"ll forever be without its popular star. That proposition doesn't look as bleak as it did earlier this season, thanks to the improvements of D.J. Byrd and Terone Johnson. Neither player screams "go-to guy" — at least right now — but each brings an important skill set and is capable of picking up Hummel's scoring load. The bigger issues facing the Boilers: Finding a dependable low-post presence and replacing point guard Lewis Jackson. Neither will be easy, the way the roster is currently constructed.