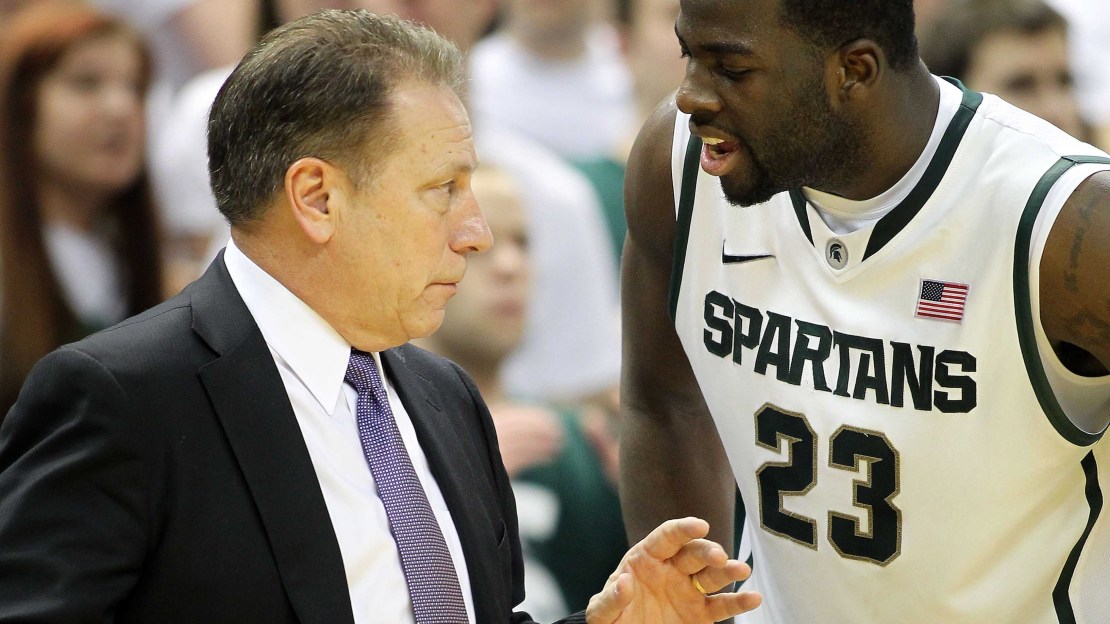 What are my colleagues around the Big Ten saying this morning? The Spartans are a sure thing in an unpredictable tourney while the Buckeyes challenge is to move on. The Wolverines look to stick around a while in the NCAA while the  Badgers? bracket is dangerous even with Kentucky nowhere near. And the NCAA committee did Purdue a favor. What was it? Find out in my daily web links post.

The Spartans are a sure thing in an unpredictable tourney, says Michael Rosenberg of the Detroit Free Press. No doubt, Michigan State is playing well, winning three games to claim the program?s first Big Ten tourney title since 2000. That?s also the last time MSU won the national championship. Coincidence? But to get to New Orleans for the Final Four, the Spartans must navigate a West region that includes No. 2 Missouri, No. 3 Marquette and No. 4 Louisville. And they must do it without Branden Dawson. It means players like Brandon Wood, Adreian Payne and Derrick Nix must continue to play well. And the Spartans must avoid the extended scoreless stretches that sometimes plague them.

The Buckeyes challenge is to move on, says Bob Hunter of the Columbus Dispatch. Ohio State was a colossal disappointment last year, entering the Big Dance as the No. 1 overall seed before losing in the Sweet 16 to Kentucky. This year is all about redemption for a talented Buckeye squad that played well in the Big Ten tourney in losing the title game clash with Michigan State. I like Ohio State?s draw as a No. 2 seed in the East with Syracuse as the No. 1. The key for the Buckeyes: Keeping Jared Sullinger out of foul trouble, and players like Deshaun Thomas and Lenzelle Smith, Jr., hitting shots with defenses focused on Sullinger.

The Wolverines look to stick around a while in the NCAA, opines Bob Wojnowski of the Detroit News. I?m not so sure Michigan is in for an extended run. The team didn?t look very good in the Big Ten tourney, needing overtime to beat Minnesota before losing by 20 to Ohio State. I even think Michigan may get toppled by Ohio in the first round. Having Trey Burke?s quickness and ability to penetrate will help, but it will be more vital for players like Stu Douglass and Zack Novak to hit open shots from long range if Michigan wants to enjoy an extended run.

The Badgers? bracket is dangerous, but Kentucky?s nowhere near, says Tom Oates of the Wisconsin State Journal. Yes, avoiding the No. 1 overall seed Wildcats will help the Badgers? cause. But they need to be wary of a very good Montana team. The Grizzlies have won 14 in a row and can shoot very well. They also have a 7-footer. As usual, it will be very import for Wisconsin shooters like Ben Brust, John Gasser and Jordan Taylor-among others–to be on target. But even more vital: The Badgers need to dial up their typically tough defense, especially on the perimeter in what looks to be a good first-round matchup with many experts having Wisconsin on upset alert.

NCAA committee did Purdue a favor, says Jeff Washburn of the Lafayette Journal-Courier. On the surface, I agree with Jeff on this, as being a No. 10 seed is much better than being a No. 8 or No. 9 seed-thus avoiding a likely clashing with a No. 1 seed in the next round. But the Boilermakers still have some heavy lifting in the first round vs. St. Mary?s, which basically is the new Gonzaga in the West Coast Conference. And should Purdue survive the Gaels, it likely will have to deal with No. 2 Kansas in the next round. And the Jayhawks very well could have been a No. 1 seed. So, in this instance, being a No. 10 isn?t really better than being an 8 or 9 seed.

OTHER LINKS OF NOTE
Big Ten
The Big Ten gets a chance for redemption on the big stage, says Amelia Rayno of the Minneapolis Star Tribune.

Michigan
The Wolverines are trying to patch up the offensive line, writes Kyle Meinke of AnnArbor.com. Michigan will take its next baby step by making the Sweet 16, says Drew Sharp of the Detroit Free Press.

Nebraska
Bo Pelini allows the media an invaluable opportunity to observe, says Steve Sipple of the Lincoln Journal Star. And Sipple adds that Lacking star power, the defense is looking for resurgence. New coaches are transitioning well, says Jon Nyatawa of the Omaha World-Herald. And Tom Osborne needs to search far and wide for the next hoop coach, says Tom Shatel of the Omaha World-Herald. Nebraska plans ?to open up the checkbook,? says Sipple of the Lincoln Journal Star.

Ohio State
The journey begins for the Buckeyes, says Bob Baptist of the Columbus Dispatch. Ohio State?s NCAA aspirations are led by its crafty thief, says Doug Lesmerises of the Cleveland Plain Dealer.

Penn State
Recruits Adam Breneman and Christian Hackenberg are eager to build on a top class, says Dustin Hockensmith of the Harrisburg Patriot-News.

Purdue
Spring football is off to a promising start, writes Mike Carmin of the Lafayette Journal-Courier.

The Buckeyes challenge is to move on