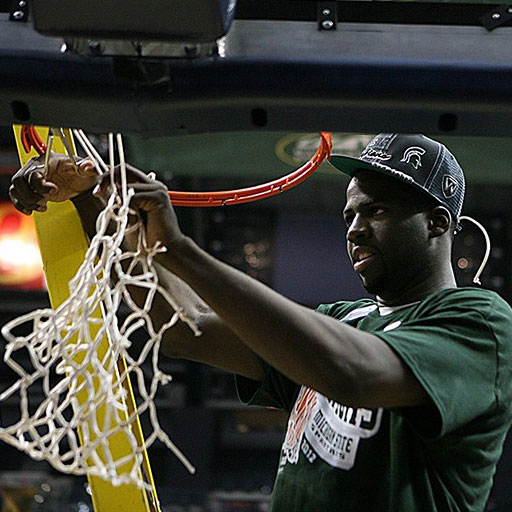 With 11 games over four days, there was a lot to watch and digest at the 15th Big Ten tourney in Indianapolis. There were highs and lows as well as good and bad from the first game to the final game.

My best player? Michigan State?s Draymond Green. The Big Ten player of the year had an encore performance, winning tourney MVP honors. Green didn?t enjoy his best scoring effort in the title game win, notching just 12 points, but he still had a big impact as a defender and grabbed a team-best nine boards. Bottom line: Green is a ?baller? who always impacts a game. Have a look at the rest of my picks in this post.

Best performance: Purdue had no answer for Jared Sullinger in a quarterfinal matchup, as the big guy notched 30 points with 12 rebounds, three blocks and two assists in the 88-71 victory. Sullinger connected on 12-of-17 shots, was five-of-five from the free-throw line and even hit a three-pointer.

Best game: Big Ten commissioner Jim Delany even said it was the best league title game he had ever seen. And I?m not gonna argue with him. The Michigan State-Ohio State contest was a spine-tingling affair that featured great momentum swings with 16 lead changes and high drama. And, an unlikely hero in senior Brandon Wood, who began his career at Southern Illinois, went to a JC, transferred to Valparaiso and then to Michigan State and had 21 big points in the championship game. What a script for a MSU program that won its first tourney crown since 2000.

Worst game: Michigan State shot a blistering 70 percent in the first half-58 percent for the game–and never looked back in taking a 92-75 victory over Iowa on Friday in the quarterfinals. The Hawkeyes had no answer for the Spartans? Draymond Green, who tallied 21 points and 10 rebounds. Gotta give an honorable mention here to the 77-55 pasting that Ohio State put on Michigan in the semifinals on Saturday.

Clutch shot: Michigan?s Evan Smotrycz took a pass from Stu Douglass and drained a three-pointer with 19 seconds left in regulation to forge a 56-56 tie. After the Wolverines snuffed out Minnesota?s last gasp in regulation, the teams went to overtime. Once in the extra session, the Wolverines assumed command, outscoring the Gophers, 17-13, and killing Minnesota?s Cinderella dreams.

Surprise player: There were three 30-point efforts on Friday, with Michigan?s Trey Burke and Ohio State?s Jared Sullinger each going off. But the most impressive-and improbable-Wisconsin?s Rob Wilson. He entered the game averaging 3.1 points. And his career-high was 13. But the senior exploded for a career-high 30 points in the Badgers? victory over Indiana on Friday. Wilson drained 11-of-16 shots and was 7-of-10 from three-point range. This was the stuff of Hollywood.

Saddest story: Illinois? Bruce Weber and Nebraska?s Doc Sadler each was relieved of their duties following opening-round losses. The Fighting Illini lost to Iowa, while the Cornhuskers fell to Purdue.

Surprise team: Minnesota. The No. 10 Gophers notched the only upset of the tourney, knocking off No. 7 Northwestern in overtime in a first-round matchup. The Gophers almost continued their improbable march on Friday before falling in overtime to No. 2 Michigan. Minnesota became the first team to play two overtime games in the Big Ten tourney.

Biggest blown game: Minnesota led Michigan, 54-45, with 4:37 left in a quarterfinal matchup on Friday. But the Gophers couldn?t hold on to the lead, notching just one hoop the rest of the way and allowed two three-pointers in the final 72 seconds to allow the Wolverines to rally for a tie and force overtime. That?s where Michigan put away the Gophers.

Biggest missed shot: Northwestern had a chance to beat Minnesota in regulation in the opening round, but Dave Sobolewski?s three-pointer with a second left didn?t convert. The Gophers outscored the Wildcats, 14-7, in overtime to take a 75-68 win that cast some doubt on Northwestern earning its first NCAA bid.

Biggest upset: No. 10 Minnesota 75, No. 7 Northwestern 68 OT. How about freshman Dre Hollins? The kid was money all night, showing he should be mentioned in the same breath as other star Big Ten freshmen like Cody Zeller, Trey Burke, Branden Dawson, Aaron White and Dave Sobolewski. Hollins tallied 25 points on 10-of-17 shooting (5-of-10 from 3-point range), scoring with his jumper and off the dribble.

Biggest turnover: Trailing Minnesota, 71-68, with less than a minute to go, NU guard JerShon Cobb inexplicably lost the ball and turned it over. On the ensuing possession, Rodney Williams broke free under the hoop for an emphatic slam to forge a 73-68 lead. Wildcat guard Dave Sobolewski then missed two free throws to kill any remaining hope Northwestern had.

Best halftime act: So many to choose from-the Simon Says guy, a game of dodge ball, musical chairs, pretty boys slam dunking off of trampolines, people riding giant unicycles ? Bill Veeck would be so proud. But I?m going to go with the guy who played an organ by bouncing balls off of the keys. Fascinating-and very impressive.

Best quote: "When things get sticky, you have to get it to your horse and Jared Sullinger's a horse, man. He's a great player and we had to do a better job of keeping it out of the post and not in his hands. But that's easier said than done. When we had size in there, he still had a lot of success. I'm just impressed with him."- Purdue coach Matt Painter, on Ohio State?s Jared Sullinger after the Buckeyes eliminated the Boilermakers on Friday.

Worst injury: The cruel hand of fate dealt a severe blow to Indiana senior guard Verdell Jones, who  injured a knee in a first-round win over Penn State and is done for the season. The Hoosiers lost in the quarterfinals to Wisconsin.

BTN.com senior writer Tom Dienhart?s work can be found at www.btn.com/tomdienhart, follow him on Twitter at @BTNTomDienhart, send a question to his weekly mailbag here, and click here to subscribe to his overall RSS feed.