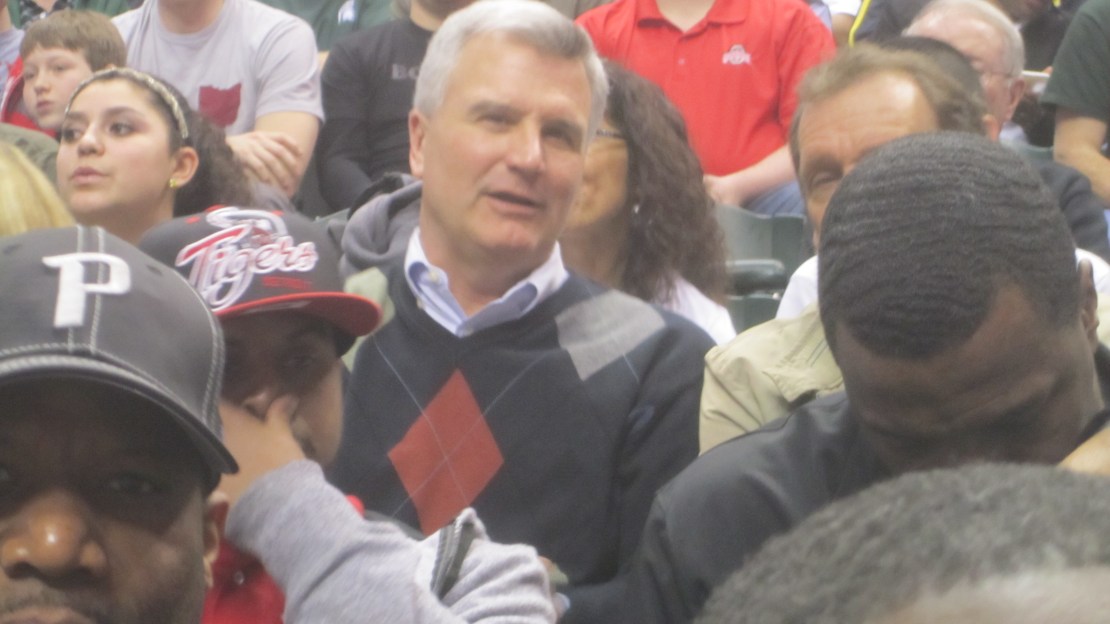 It's Day 3 at the 2012 Big Ten Men's Basketball Tournament, which means we're down to the semifinals. What?s going on around the tourney aside from the exciting games? BTN.com web editor Brent Yarina is in Indianapolis for the Big Ten tourney, and he's filed another notebook. From emotional coaches to school-specific grub to familiar faces in attendance to a hole in the basket support, you can find it all in this post.

LETTING THE EMOTIONS FLOW: Coaching is an emotional gig. It's an occupation that requires guys to wear several hats on a daily basis: coach, teacher, father figure, general manager, counselor — and the list goes on. Consequently, a coach is certain to feel a special connection and bond to his school, his program, his players and his university. So, with some much on the line this week, it comes as no surprise that we've seen several coaches become emotional. Watch the example videos below.

SPEAKING OF WEBER: Bruce Weber has collected more than his share of Illinois-themed ties in his nine years at the helm of the Illini. And during the coach's good-bye press conference Friday afternoon, he said he'll donate his collection of 72 orange ties to benefit Coaches vs. Cancer. Why he has 72, who knows? Regardless, the act is honorable and classy. No word on what Weber will do with his orange blazer. On the topic of ties, Weber and Doc Sadler, who also was relieved of his duties at Nebraska on Friday, both wore ties the color of their former school to the press conference. That says a lot about how these guys feel about their school.

HANGING AT BANKERS LIFE: The Big Ten tourney is never short on some good people-watching, and that has been true every day of the tournament. For Saturday's semifinals, former Illinois coach Bruce Weber surprised as a special guest of Tom Izzo's, plus Tim Hardaway, Satch Sullinger and Flip Saunders, to name a few, were spotted. It was really nice to see Weber back here two days after his Illini were eliminated and one day after he was dismissed. As for Sullinger, he must be darn proud of his son, Jared Sullinger, and former player, Trey Burke, who both went for 30 points Friday night. SCHOOL PRIDE: One of the many great things about Bankers Life Fieldhouse is the wide variety of food options. During the Big Ten tourney, the pickings get even better as a couple places promote school pride, including the Big Ten-centric spud station that I featured Thursday. This particular place sells potatoes garnished with Big Ten "toppings," and I asked the workers which one was most popular this year. The answer: "It's according to who's playing," the workers agreed. However, they did say Indiana's, topped with salsa and sour cream, always is one of the most popular. Not to be outdone, there's also a hot dog stand that allows Big Ten fans to show their loyalties. This place displays its inventory for all to see, and, once again, Indiana is the popular choice. This Hoosiers-themed dog has coleslaw, red pepper relish and fried onions. All four semifinal teams have work to do to catch up to the Indiana Dog. Arrive hungry, Michigan, Michigan State, Ohio State and Wisconsin fans! PACKING A PUNCH: Everyone knows Derrick Nix is a beast of a man, but the Michigan State center might have a second profession if basketball doesn't pan out: boxing. Frustrated during Friday's quarterfinal win over Iowa, Nix punched a hole in the basket support. Needless to say, it was a powerful punch. I can only imagine the damage it would inflict on another person. Watch the video of it below.

THE GUY CAN FLY: If you haven't seen Minnesota's Rodney Williams in person, try and buy a ticket the next time he visits your Big Ten arena. The junior's leaping ability and athleticism are obvious on TV, but it's a whole different thing in person. The guy elevates so fast, so high, so effortlessly; in fact, the Big Ten Geeks say he's like an elevator, and they aren't too far off. Plain and simple, he's worth the price of admission.

TAYLOR GETS ELUSIVE FIRST WIN: For all Wisconsin senior Jordan Taylor has accomplished during his decorated career, he came to Indianapolis this week without a single Big Ten tourney win. No more. Taylor go that first victory Friday, with the Badgers holding off previously surging Indiana, and as a reward, he joined Dave Revsine, Gary Williams and Jim Jackson on the BTN set for a postgame interview. To be honest, though, Taylor wasn't the star. That title went to reserve Rob Wilson, who scored a career-high 30 points. This from a guy who came into the game averaging three points a contest. Incredible.