Read Up On Our Last-Minute Tourney Links 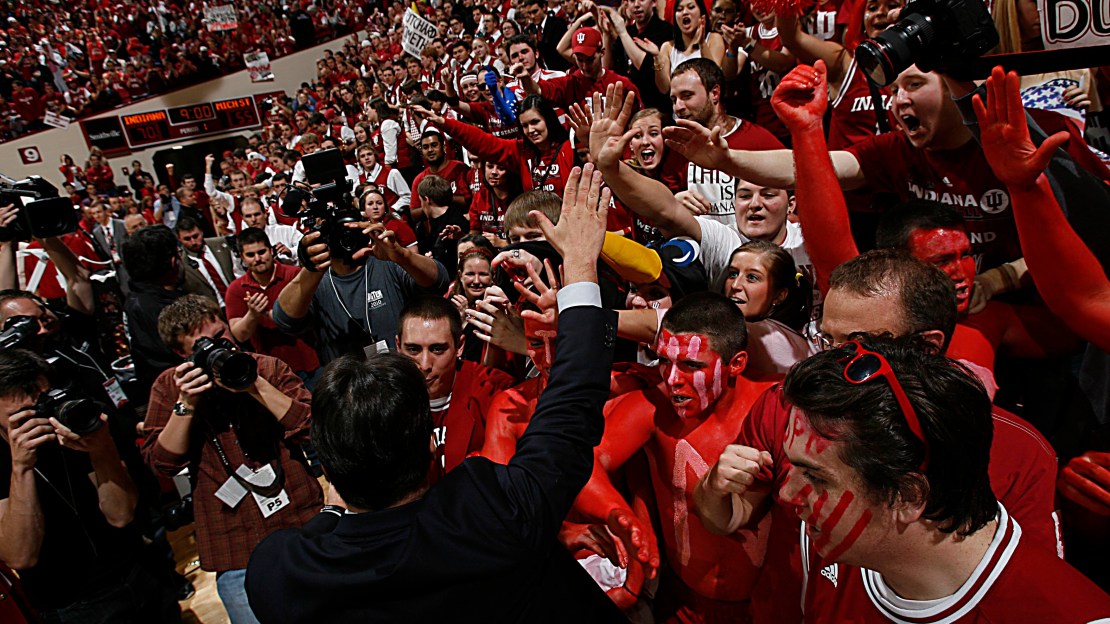 Check out these Thursday morning headlines from around Big Ten country before the Big Ten Men's Basketball Tournament tips off.

Big Ten parity will be on display in the league tourney, writes Joe Rexrode of the Lansing State Journal. The fact Michigan State, Michigan and Ohio State all tied for the conference title speaks to that balance in a conference that the RPI says is No. 1 league in the nation. Just look at the league! How many of these teams could win the event in Indy? I think six could: MSU, OSU, Michigan, Wisconsin, Indiana and Purdue. I?m not sure how many other conferences could say that. This is a deep league with a talent level that?s as high as it has been in recent years. And the coaching is among the best in the country, too. But I wonder: Will the conference tourney champ be able to net a No. 1 seed in the NCAA tourney? Many factors will end up telling that tale, but Michigan State and Ohio State may have chances to do so.

The Hoosiers take momentum into the tourney, writes LaMond Pope of the Ft. Wayne Journal Gazette. No doubt. Indiana has won seven of its last eight games and is playing as well-if not better-than any team in the Big Ten as the league tourney opens. The Hoosiers are a deep team that has an array of good shooters. And Cody Zeller has been one of the nation?s top freshmen, making a huge impact on both ends of the court in what has been a breakout season for the Hoosiers under Tom Crean. Can Indiana win its first Big Ten tourney? I think it could happen. IU takes its first step today vs. overmatched Penn State; next would be a date with Wisconsin. This is gonna be fun.

Minnesota? Northwestern? John Beilein doesn?t care who he plays on Friday when Michigan opens the Big Ten tourney, writes Nick Baumgardner of AnnArbor.com. He shouldn?t care. His Wolverines are a good matchup for either foe. In fact, Michigan may have a shot to advance to the league title game for the first time since winning the inaugural even in 1998. The key for the Wolverines will be their ability to shoot well. Gunners like Zack Novak, Stu Douglass and Tim Hardaway, Jr., must be on target in Indianapolis. And they could get open looks if Trey Burke is able to penetrate into the paint to draw defenders from the perimeter. Also, big man Josh Morgan could be an X-factor. Watch him. Bottom line: This could be the first of many deep Big Ten tourney runs for Michigan under Beilein.

The spotlight falls on the Wildcats as they seek to build a case for the NCAA, writes Tina Akouris of the Chicago Sun-Times. In fact, there may not be a juicer storyline in Indianapolis, as the nation watches to see how Northwestern performs in its quest for that elusive NCAA bid. Without a doubt, the Wildcats have work to do, beginning with a must-win over Minnesota today in the opening round of the Big Ten tourney. Then, a game with Michigan waits. Would NU need to beat the Wolverines to assure itself of an NCAA bid? Maybe. Regardless, it will be great theatre the next couple of days.

Gotta sprinkle in a bit of gridiron with your hoops, right? Check this out: Jon Budmayr?s injury setback has turned the focus toward Wisconsin landing Maryland transfer quarterback Danny O?Brien, writes Tom Mulhern of the Wisconsin State Journal. The sense of urgency to find a replacement for Russell Wilson-who was a transfer from N.C. State–has gone up a few notches. And recent news that touted incoming freshman signal-caller Bart Houston will undergo shoulder surgery that figures to limit him in fall drills only exasperates the situation for the two-time defending Big Ten champs. Hey, at least Montee Ball is back, right?

OTHER LINKS OF NOTE:
Illinois
Illini look to be the surprise of the tourney, says Shannon Ryan of the Chicago Tribune. Paul Klee of the Champaign News-Gazette says Indiana is winning it.

Indiana
The Hoosiers? success has had an economic impact, says Terry Hutchens of the Indianapolis Star. Hutchens also writes
about role reversal in the first round with Penn State.

Iowa
Matt Gatens is described as the epitome of character and class, says Rick Brown of the Des Moines Register. Iowa document says A.D. Gary Barta hired and will supervise Brian Ferentz, writes Tom Witosky of the Des Moines Register. Brian Ferentz and Levar Woods are happy to be part of the Hawkeye family, writes Ryan Suchomel of the Iowa City Press-Citizen. The new staff is attempting to form Iowa?s new identity says Marc Morehouse of the Cedar Rapids Gazette.

Northwestern
Bill Carmody is a survivor, writes Teddy Greenstein of the Chicago Tribune.

Ohio State
Doug Lesmerises of the Cleveland Plain Dealer takes us inside the Big Ten tourney.

Wisconsin
The Badgers are looking to end a run of early tournament exits, says Jim Polzin of the Wisconsin State Journal. ESPN?s Dan Dakich disagrees with the coach who dissed the Badgers? style, says Bob Wolfley of the Milwaukee Journal Sentinel.