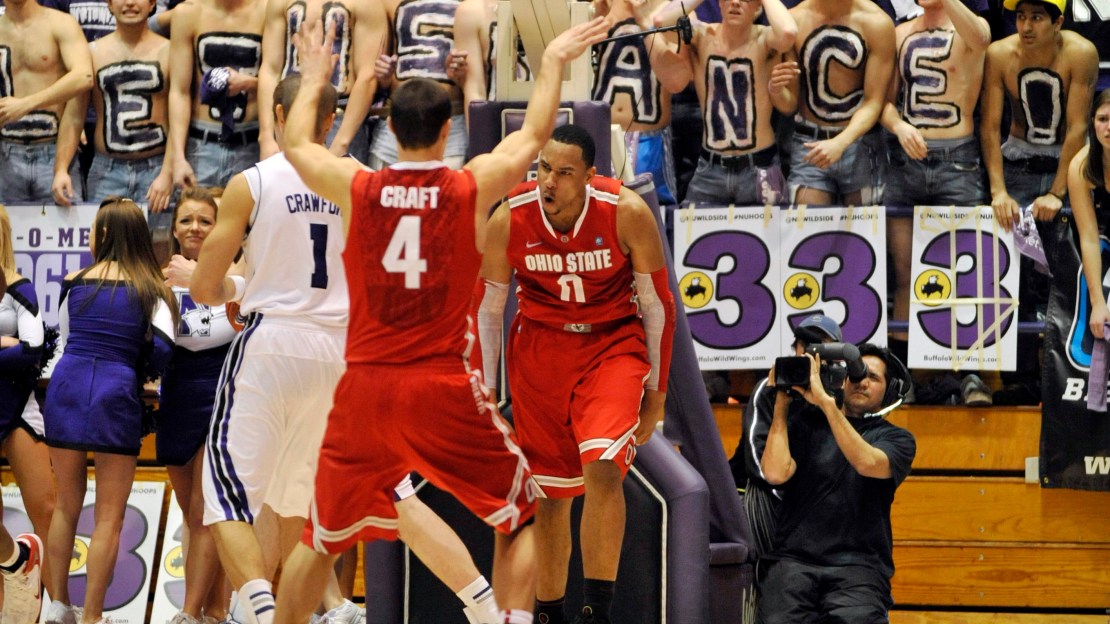 In another edition of my daily links, I suggest five top stories worth a read plus a handful of others, too. But before I get to my usual breakdown, Mike DeCourcy of The Sporting News and a frequent guest on BTN TV rolled out his publication's All-American team and there are two familiar names on the first team and another one on the All-Freshman team. Read his piece here and see the list of teams here.

And don't forget: I'm headed to the Big Ten Men's Basketball Tournament in Indianapolis to be part of the live BTN.com coverage. Use the Big Ten Men's Basketball Tournament interactive bracket to track games live, print the bracket here, and use these helpful links: News, TV info, Videos, Live Blog, and #B1Gtourney on Twitter. Now let's get on to my other links for Tuesday.

A Buckeye basketball doubter seeks absolution, opines Rob Oller of the Columbus Dispatch. I have to agree. I really have no idea what to expect from Ohio State in the Big Ten tourney and have my doubts about how deep this team can wade into March. The Buckeyes are the No. 3 seed, coming off a huge victory at Michigan State on Sunday to grab a share of the Big Ten championship. Kudos. But facts are facts: Ohio State was just 4-3 in its last seven games. The team has been plagued by inconsistent shooting all season. And leadership also has been an issue for a team that features just one senior: William Buford. No doubt, the Buckeyes miss Jon Diebler and David Lighty. Bottom line: This is an uber-talented team that could win the league tourney-or lose its first game, likely vs. Purdue on Friday.

The Wildcats have work to do to seal their first NCAA bid, writes Teddy Greenstein of the Chicago Tribune. Greenstein talked to CBSSports.com bracket guru Jerry Palm, who thinks Northwestern has to win two games in the Big Ten tourney to secure its first NCAA bid. That will mean beating No. 10 seed Minnesota on Thursday and then dumping No. 2 Michigan-which has a bye–on Friday. And, know this: The Wildcats owe the Wolverines, who won two overtime games over Northwestern this season. Honestly, I like Northwestern?s chances for a school that will be one of the top storylines in Indianapolis later this week. This is gonna be fun.

Eamonn Brennan of ESPN.com offers his insight on Big Ten Freshman of the Year race. In the end, Indiana?s Cody Zeller (coaches) and Michigan?s Trey Burke (media) each received an honor, which only seemed fair. I went with Zeller, just given the way he transformed the Hoosiers on both ends of the court. And offensively, his impact was monstrous, as Zeller?s presence opened the court for players like Christian Watford, Jordy Hulls and Victor Oladipo, among others.

Greg Davis has a history of maximizing talent through adjustments, reports Marc Morehouse of the Cedar Rapids Gazette. No doubt, Davis is a sage offensive mind who has developed some good quarterbacks at Texas, including the likes of Chris Simms, Vince Young, Major Applewhite and Colt McCoy. And Davis didn?t force his system on his signal-callers, playing a pro-style with Simms and running a zone-read scheme with Young. Yes, Davis received criticism for lacking imagination and being predictable. Still, in the end, he will upgrade the Hawkeye aerial game, which will work in concert with Kirk Ferentz and his expertise in the running game to hopefully give Iowa a more consistent and potent attack.

MORE LINKS OF NOTE
Illinois
Bob Asmussen of the Champaign News-Gazette conducts a Q&A with Tim Beckman to preview spring drills. On hoops, Mark Tupper of the Decatur Herald-Review wonders: Does anybody have anything left? The Big Ten tourney is Illinois? last chance to show some spunk, writes Shannon Ryan of the Chicago Tribune.

Michigan
The ring is the thing for John Beilein, says Nick Meyer of the Detroit Free Press. That's why Michigan celebrates its good fortunes, writes Angelique Chengelis of the Detroit News.

Northwestern
Northwestern needs momentum now if an NCAA berth is to happen, says Tina Akouris of the Chicago Sun-Times.

Ohio State
A former hoops walk-on has a tell-all book out about his team and Thad Matta, writes Bob Baptist of the Columbus Dispatch. Urban Meyer is waiting until spring drills to assess his team, says Doug Lesmerises of the Cleveland Plain Dealer.

Penn State
Bill O?Brien opens up on the idea of over signing, says Kevin McGuire of Bleacher Report.