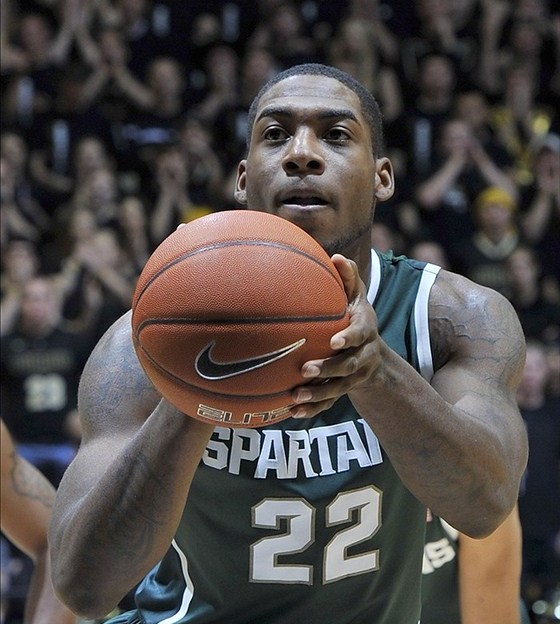 In my first daily batch of links for this week, Matt Charboneau of the Detroit News tells us that Delvon Roe feels Branden Dawson?s pain. No doubt, and Dawson?s loss for the rest of the season to a knee injury suffered in the loss to Ohio State will have a big impact on Michigan State in the postseason. This is a slumping Spartan squad that enters the Big Ten tourney as the No. 1 seed but riding consecutive losses at Indiana and at home yesterday to the Buckeyes on Senior Day. Now, this: News that the freshman sensation is done.

Dawson was an explosive scorer off the wing who excelled at finishing at the rim and crashing the boards, averaging 8.4 points and 4.5 rebounds. Without the 6-6 Dawson, Michigan State will need big men Adreian Payne and Derrick Nix to pick up their production. Austin Thornton also will have to step up on the wing for a Spartan squad looking to win its first Big Ten tourney title since 2000 and secure a high bid to the NCAA tourney.

Hoosier seniors Verdell Jones III, Matt Roth, Tom Pritchard, Kory Barnett and Daniel Moore finally have a year to enjoy, writes Bob Kravitz of the Indianapolis Star. No doubt. The first three seasons of their careers, the seniors went a combined 28-66 overall and 8-46 in Big Ten action. Now, Indiana boasts a 24-7 record with an 11-7 mark in Big Ten action to finish fifth in the league. Best of all: Indiana is a lock to play in its first NCAA tourney since 2007. And the Hoosiers could make some noise in the Big Ten tourney, as they arguably are the hottest team in the Big Ten with four wins in a row and seven in their last eight contests. Could Indiana win its first Big Ten tourney title? Why not? And a deep run in the Big Dance also is possible.

Nebraska grid coach Bo Pelini is expecting a big jump on defense, writes Sam McKewon of the Omaha World-Herald. No doubt, the Cornhusker defense wasn?t up to par last season. The Nebraska defense finished seventh in the Big Ten (350.7 ypg). The rushing defense was eighth (158.5 ypg) and the pass defense was seventh (192.2 ypg). A big reason for the struggles? A lack of big plays. The Huskers finished 12th in the Big Ten in tackles for loss (4.3 pg) and ninth in sacks (1.6 pg). And Nebraska also was only 10th in the conference in turnovers gained with 18. Making matters even tougher: The defense lost its three best players in linebacker Lavonte David, cornerback Alfonzo Dennard and tackle Jared Crick. Plus, coordinator Carl Pelini left to coach Florida Atlantic.

The Illini are OK with an NIT bid, says Paul Klee of the Champaign News-Gazette. Well, that?s good, because that?s likely all that Illinois will receive. The Fighting Illini finished the season by losing 11 of their last 13 games. This, after a 4-1 start in Big Ten action. Illinois enters the Big Ten tourney with a 17-14 mark overall and a 6-12 league record, needing to win the event to secure a bid to the Big Dance. The No. 9 seeded Illini take on No. 8 Iowa in the first round of the conference tourney on Thursday with the winner slated to play No. 1 Michigan State. Could we be watching the final days of the Bruce Weber era? Since taking Illinois to the national title game in 2005, Weber has a 61-61 Big Ten record the past seven seasons with a 2-4 mark in four NCAA appearances.

OTHER LINKS OF NOTE
Illinois
Tim Beckman already Has the Illini competing, reports David Mercer of the Associated Press. When does athletic director Mike Thomas act? Mark Tupper of the Decatur Herald-Review explains. Let the A.D. do his stuff, writes Loren Tate of the Champaign News-Gazette.And finally, Paul Klee of the Champaign News-Gazette explains the Southern Illinois-Illinois connection.

Nebraska
Amid fervent fan base, Bo Pelini seeks to keep an even keel, says Steve Sipple of the Lincoln Journal Star. Sipple also writes that Brion Carnes offseason improvement is key for the Huskers.

Northwestern
Expectations are high for Kain Colter, says Teddy Greenstein of the Chicago Tribune. On the hard court, Rick Morrissey of the Chicago Sun-Times wonders: Does Northwestern deserve its first NCAA bid?

Ohio State
That?s what you call a bombshell, says Michael Arace of the Columbus Dispatch. ?Willis B.? was oh so good in crunch time, writes Bill Livingston of the Cleveland Plain Dealer.

Penn State
Bill O?Brien is making positive first impressions, says Rich Scarcella of the Reading Eagle. That's why Penn State is off to a fast start in recruiting, writes Donnie Collins of the TheTimes-Tribune.com of Scranton.

Purdue
Indiana was a bad matchup for the Boilermakers, explains Jeff Washburn of the Lafayette Journal-Courier.