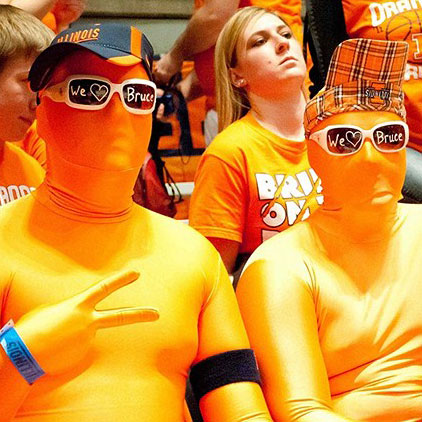 Draymond Green for Big Ten MVP? It?s an easy pick, says Terry Foster of the Detroit News. Who can argue with that? Green is the only player in the Big Ten who is averaging a double-double. And his leadership is unmatched, as he has led the Spartans to at least a share of Tom Izzo?s seventh league championship. Is there any way Michigan State will lose at home to Ohio State on Senior Day on Sunday? I will be shocked if it happens. Read more of my newsy links for Friday. And remember? I do this every weekday.

Illinois? NCAA hopes are virtually dead following that home loss to Michigan last night, writes long-time Illini scribe Mark Tupper of the Decatur News-Herald. He?s correct. I really thought Illinois still had a shot to build its resume up to being NCAA at-large caliber with a win over the Wolverines followed by a victory at Wisconsin over the weekend and a few wins in the Big Ten tourney. Instead, the Illini?s seventh loss in eight games likely means the program is NIT-bound-unless it can somehow win the Big Ten tourney.

The one and only Mike Huguenin of Yahoo! Sports takes a look at the NCAA tourney bracket. And what ?Hugs? says is gospel. He has six Big Ten teams listed as ?locks? for the Big Dance as we enter the final weekend of the regular-season: Michigan State, Ohio State, Michigan, Wisconsin, Indiana, Purdue. Are there any bubble teams? I?m not so sure. I think the bubble popped for Illinois with its loss to Michigan and for Northwestern when it fell to Ohio State. The only way for those teams, or Iowa, Minnesota, Nebraska and Penn State, to get admitted to March Madness will be to win the Big Ten Tourney. Or to buy a ticket.

Kerry Coombs officially becomes cornerbacks coach at Ohio State, reports Doug Lesmerises of the Cleveland Plain Dealer. This is significant because Coombs is a well-respected and well-connected coach in the Queen City who should be able to deliver some of the top talents in southwest Ohio up to Columbus. The Bearcats did all they could to keep Coombs from a money and title standpoint. But it?s impossible to trump the oomph and pizzazz of THE Ohio State University. Yet, another great hire by Urban Meyer in his quest to build a great staff that recruits out of its mind. Be afraid, Michigan. Be very afraid.

Teddy Greenstein of the Chicago Tribune wonders: How much misery can a fan base take? It has been difficult to watch the Wildcats drop those key home games to Michigan and Ohio State. NU?s NCAA hopes? Almost nil, now. I often marvel at the fact this program never has been to the Big Dance. It?s a truly stunning factoid. A football program is much more difficult to build, but Northwestern has done that and even won Big Ten titles in 1995, 1996 and 2000 (that?s as many as Penn State). Yet, the Wildcats can?t get a hoop team to March Madness, while schools with similar profiles like Duke, Vanderbilt, Wake Forest and Stanford have enjoyed some great NCAA success. It will happen for Northwestern. Some day. I think.

OTHER LINKS OF NOTE
Illinois
That?s a wrap, writes Paul Klee of the Champaign News-Gazette.

Andy Katz of ESPN wonders: If Bruce Weber is out, where would be a good landing spot for him? Perhaps, Southern Illinois?

Indiana
The Dagger at Yahoo! Sports catches up with the guy who said ?Hey, Knight, what?s up??

Michigan
The Big Ten title picture is getting clearer, writes Rod Beard of the Detroit News.

Michigan State is working on getting a hardship transfer for receiver DeAnthony Arnett, reports George Sipple of the Detroit Free Press.

Doc Sadler doesn?t bit on a question about his job, says Lee Barfknecht of the Omaha World-Herald.

Northwestern
Kain Colter is in the spotlight as spring drills open, says Tina Akouris of the Chicago Sun-Times.

Q&A with Pat Fitzgerald. He expects progress next season, writes Teddy Greenstein of the Chicago Tribune.

Ohio State
The Buckeyes? bond to be tested vs. Michigan State, says Bob Baptist of the Columbus Dispatch.

Penn State
Mike Poorman of StateCollege.com has 55 changes in the first 55 days of the Bill O?Brien era.