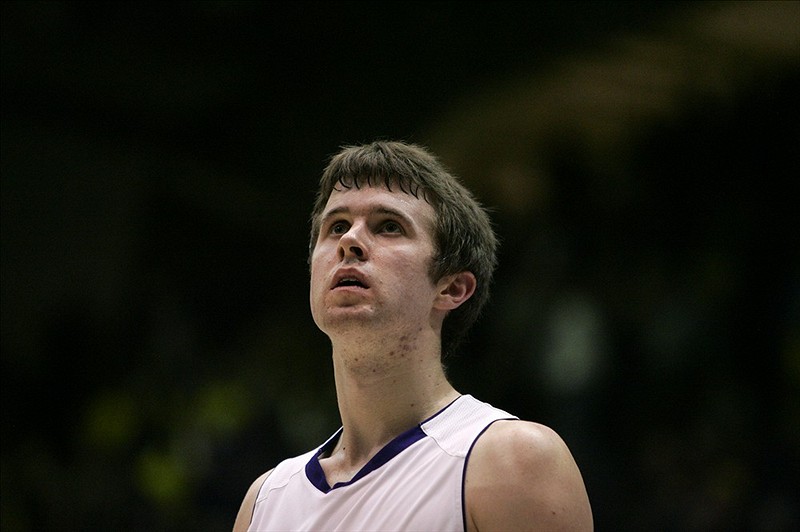 It was just last week when many felt Northwestern played perhaps the biggest game in school annals. And it lost, 67-55, in overtime at home to Michigan. But the Wildcats rebounded to score a huge win at Penn State over the weekend. Now, comes yet another ?biggest game in school history? for the Wildcats tonight when Ohio State visits. In the first of today's five big links worth a look, Teddy Greenstein of the Chicago Tribune says Northwestern needs another big game from John Shurna if it wants to beat Ohio State.

Greenstein thinks NU needs at least two more wins. And he is correct. Shurna is a scoring machine who may need to score 30 points for the Wildcats to have a chance for victory tonight. And it?s a victory over Ohio State-followed by a win at Iowa in the regular-season finale or one in the Big Ten tourney–that?s vital if the Wildcats hope to earn their first bid ever to the NCAA tourney.

Is Indiana all the way back? I don?t know. But there?s no doubt this team has put the electricity back in Assembly Hall, writes Bob Kravitz of the Indianapolis Star. Tom Crean has seen his victory total go from 6 to 10 to 12 and now 23 in Bloomington. This team has had its downs (loss at Nebraska; at home to Minnesota), but there have been more ups, including last night?s home win over No. 5 Michigan State. IU has now toppled three top five teams in the regular season, a first in program history. The Hoosiers are one of the hottest teams in the Big Ten and are capable of winning the league tourney. I can?t wait to see what this team looks like after next year?s loaded recruiting class arrives. But, let?s enjoy the moment.

Remember when Jared Sullinger was a national player of the year contender? No more. He?s officially in a funk. There?s no nice way to say it. The Buckeye big man scored nine points in a win over Illinois and eight in the loss at Wisconsin. Doug Lesmerises of the Cleveland Plain Dealer says the big fella needs to overcome on-court distractions. Too often of late, Sullinger has shown some bad body language and let his emotions get the best of him. He needs to regain his composure and form for the Buckeyes to get back on track. Ohio State has lost three of its last five games. And after tonight?s game at Northwestern, there?s a date at Michigan State. If Sullinger and Ohio State don?t get dialed in, they could endure another disappointing end to their season after seeing 2010-11 end with a Sweet 16 loss to Kentucky after the Buckeyes entered the tourney as the No. 1 overall seed.

Meyers Leonard tells Paul Klee of the Champaign News-Gazette that his decision on leaving for the NBA can wait. Good. I sure hope that the talented 7-1 sophomore opts to return to Illinois for at least another year of development. He needs it. Yes, Leonard is an uber-talented big man who surely will be a lottery pick whenever he enters the draft. But there?s a big difference between making the NBA and staying in the NBA. I think Leonard needs more maturity on and emotional level-as well as improved strength-in order to make the jump. He also needs to develop more low-post moves and learn to play hard-all of the time.

Bill Rabinowitz of the Columbus Dispatch takes a look at the NCAA bracket. And he thinks the Buckeyes aren?t even a No. 2 seed at this point. I have to agree. Rabinowitz feels Duke, North Carolina, Missouri and Marquette are more fitting for the 2 spots. What does Ohio State have to do to move up a line in the bracket? Rabinowitz thinks a sweep of Northwestern and Michigan State this week would suffice. But that will be a tall order, considering the Spartans will be extra motivated to beat the Buckeyes on Sunday to clinch the outright Big Ten title on Senior Night in East Lansing when Draymond Green will be honored. Check out who Rabinowitz has in and out of the tourney. You may find some surprises.

OTHER LINKS OF NOTE
Illinois
Bruce Weber seeks selflessness, writes Shannon Ryan of the Chicago Tribune.
It has been a rocky road for Sam Maniscalco, says Mark Tupper of the Decatur Herald-Review.

Indiana
Terry Hutchens of the Indianapolis Star has notes from Indiana?s big win over Sparty.

Michigan
With the Spartan?s emphatic loss at Indiana, Michigan still has a shot at a share of the Big Ten title, writes Nick Baumgardner of AnnArbor.com.
Fans to pay more for prime seats at Crisler Center, reports Eric Lacy of the Detroit News.
Junior Hemingway sees an upset of Alabama in the 2012 season opener, says the Detroit News.

It?s all about pride for the seniors in their final home game, writes Brian Rosenthal of the Lincoln Journal Star.

Bo Pelini is in no hurry to fill his staff vacancy, writes Steve Sipple of the Lincoln Journal Star.

?B-Rich? gets an A in resilience, writes Lee Barfknecht of the Omaha World-Herald.

Northwestern
The Wildcats look to get off the bubble, reports Tina Akouris of the Chicago Sun-Times.

Ohio State
A top-rated lineman commits, reports Tim May of the Columbus Dispatch.

Wisconsin
The Badgers don?t get buried by bricks, writes Jeff Potrykus of the Milwaukee Journal Sentinel.