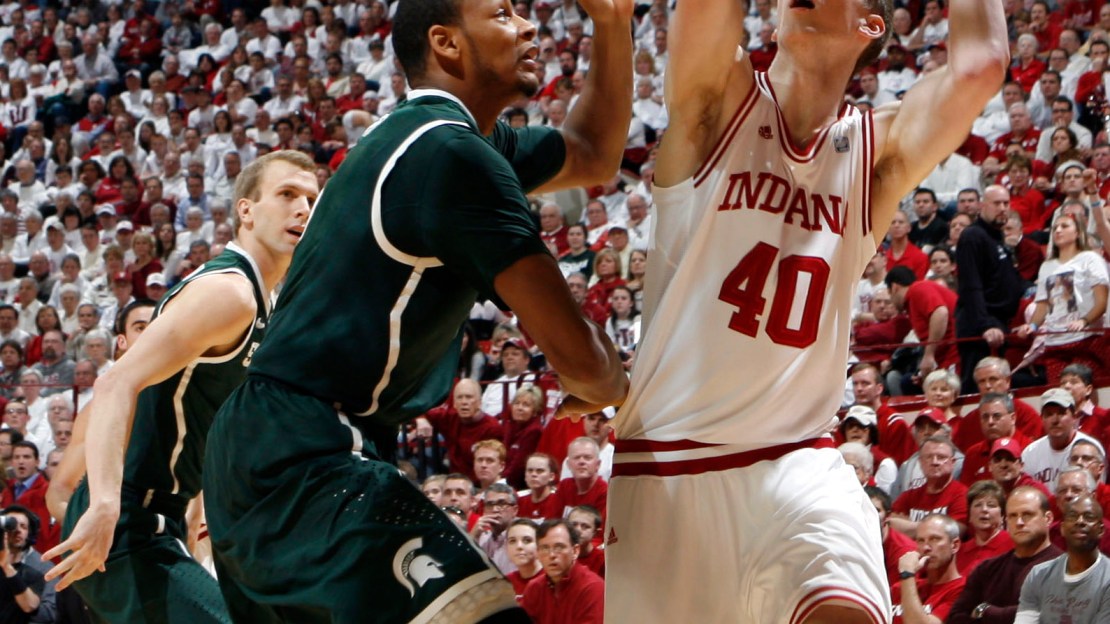 No. 20 Indiana snapped No. 5 Michigan State's seven-game winning streak (recap) and No. 15 Wisconsin clinched a bye in next week's Big Ten tourney by rallying past archrival Minnesota (recap) on Tuesday night. Catch up on all the action on our BTN.com scoreboard and get stats, video and recaps in this post.

Like highlights? Bookmark our Did You See This? feature, where we archive some of the best Big Ten highlights, including these dunks from the Michigan State-Indiana game. Coming up on our Super Wednesday doubleheader, presented by Buffalo Wild Wings: Penn State vs. Purdue (6:30 ET) and No. 11 Ohio State at Northwestern (8:30 ET).

FINAL: Draymond Green led No. 5 Michigan State with 29 points and eight rebounds, but it was not enough as the Spartans fell to No. 20 Indiana 70-55 Tuesday at Assembly Hall. Christian Watford sparked Indiana (23-7), as he had 10 points and yanked down 14 rebounds in the victory. Verdell Jones III had a quality shooting game, nailing 3-of-5 shots from the field and scoring 12 points. The Hoosiers shot 48 percent from the field (23-of-48). Cody Zeller (18), Victor Oladipo (13) and Jordan Hulls (10) also scored in double figures for Indiana. Michigan State (24-6) had trouble finding its touch, shooting just 39 percent (20-of-51) from the field. Indiana won the free throw battle, shooting 86 percent (19-of-22) from the charity stripe, compared to 59 percent (10-of-17) for the Spartans. With the loss, Michigan State's seven-game winning streak came to an end.

HALFTIME:  Draymond Green's been a spark for No. 5 Michigan State, but the Spartans trail No. 20 Indiana 41-27 at the break. In the first 20 minutes, Green scored 16 points, grabbed four rebounds, and shot 6-of-9 from the field. The Hoosiers led 32-25 before Indiana went on a 9-2 run to close the half. An aggressive offense and the ability to get to the charity stripe allowed the Hoosiers to take a halftime lead. Indiana made 16 of 18 free throws. The game was tied 6-6 before Michigan State went into a funk, going the next 2:11 without scoring, and allowing the Hoosiers to take a 14-6 lead with 14:40 left in the first half. Seven Indiana players have scored. Victor Oladipo is putting together a nice game so far for Indiana, with 11 points.

FINAL: No. 15 Wisconsin's defense shut down Minnesota, as the Badgers defeated the Golden Gophers 52-45 on Tuesday at the Kohl Center. Wisconsin (22-8) held the Golden Gophers (17-13) to 24 percent shooting from the field. Jordan Taylor gave the Badgers a boost, thanks to 22 points. Trailing 23-13 with 2:08 left in the first half, the Badgers went on a 24-7 run to seize a seven-point advantage midway through the second half. Wisconsin struggled from the floor, shooting 32 percent (12-of-38), but the Badgers went 22-of-29 from the charity stripe (76 percent). Wisconsin also got a double-digit contribution from Ryan Evans, who scored 12. Rodney Williams scored 11 points and yanked down seven rebounds for Minnesota. The Golden Gophers also got a double-digit game from Andre Hollins, who scored 18. Minnesota lost despite outrebounding the Badgers 35-23. Minnesota has now lost six games in a row.

HALFTIME: Minnesota leads 23-16 at halftime after locking down No. 15 Wisconsin's offense, holding the Badgers to 21 percent shooting and just four field goals. The rebounding edge belongs with the Golden Gophers, by a 19-12 margin on the boards. Minnesota has the lead at halftime due in large part to its ability to get to the foul line. The Golden Gophers shot 11-of-13 free throws in the first 20 minutes. The game was tied 13-13 before Wisconsin went into a funk, going the next 4:53 without scoring, and allowing Minnesota to take a 23-13 lead late in the first. Andre Hollins and Rodney Williams carried the Golden Gophers in the first half with 18 of their team's 23 total points. Hollins has scored 13 and Williams has added five. Jordan Taylor led the way for the Badgers in the first half, with five points.