Dienhart: Is Green the Player of the Year? 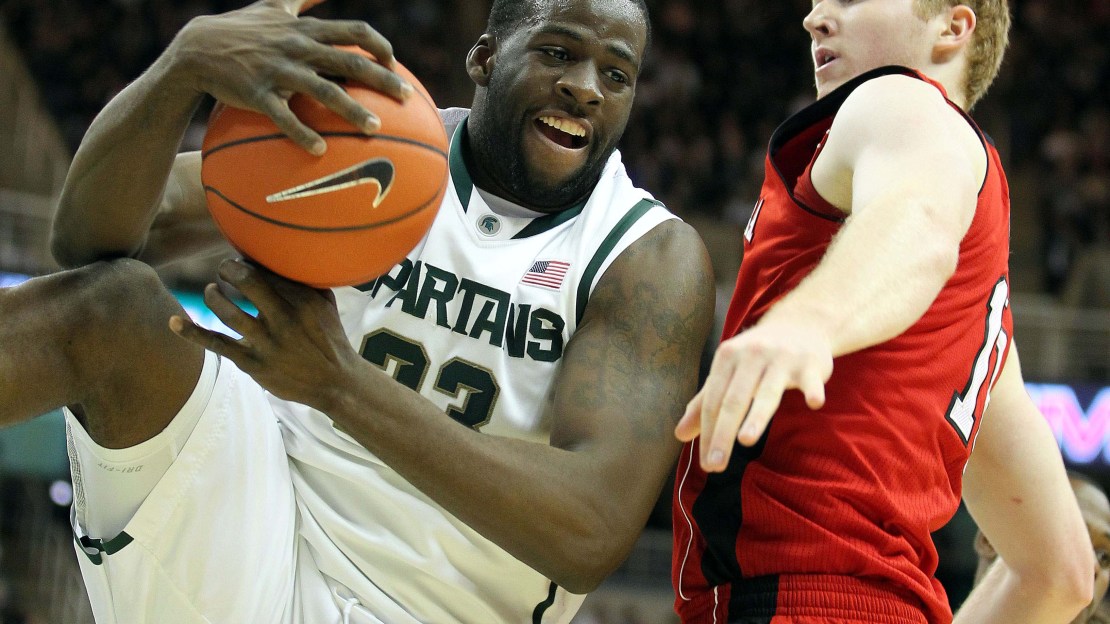 Entering the final week of the season, Draymond Green?s reign as the Big Ten?s top player isn't threatened as he?s on course to take home the league's Player of the Year honors (announced next Monday). Why not? Green is the lone player who averages a double-double. And his leadership is off the charts, as Green already has led the Spartans to a share of the Big Ten title.

But what has happened to Jared Sullinger, who is in the worst funk of the season? As Sullinger has slipped, the Buckeyes have faded from Big Ten contention. Wisconsin?s Jordan Taylor, Penn State?s Tim Frazier, Indiana?s Cody Zeller and Northwestern?s John Shurna continue to excel. And how about Purdue?s Robbie Hummel, who is coming on down the stretch? All are playing well, but none are on Green?s level. I've been charting the top players each week. Read my latest list.

2. Jared Sullinger, C, Ohio State, So. What is wrong? The last two games, he has a combined 17 points and hit 8-of-17 shots with 12 rebounds. That?s typically what Sullinger notches in a single game. The result, the Buckeyes have little chance of earning a share of the Big Ten title. Sullinger must turn it on in March.
Key stats: 17.2 ppg; 9.0 rpg; 1.0 apg

3. Jordan Taylor, G, Wisconsin, Sr. This hasn?t been the ideal senior season for Taylor, but he came up big when it mattered on Sunday by scoring 19 points to deliver a huge win at Ohio State. The Badgers had lost three of their previous five games, so that victory was huge for Wisconsin?s psyche as it turns the corner into March.
Key stats: 14.1 ppg; 3.8 rpg; 4.2 apg

4. Tim Frazier, G, Penn State, Jr. Night in and night out, Frazier is a hallmark of consistency. He has scored over 20 points on 15 times this season despite the best efforts of the opposition. Shooting, driving ? Frazier finds a way to get it done on the scoreboard.
Key stats: 18.7 ppg; 4.8 rpg; 6.3 apg

5. Cody Zeller, C, Indiana, Fr. The guy showed he?s human after all with that seven-point effort in the win at Minnesota that broke a string of seven consecutive games with double-figure scoring. Still, Zeller is special with the way he runs the court. And he has such a high hoop IQ for a youngster.
Key stats: 15.7 ppg; 6.6 rpg; 1.2 apg

6. John Shurna, F, Northwestern, Sr. The Big Ten?s top scorer continues to dominate, drawing a big foul at the end of the Penn State game and then sinking the winning free throws to steal a victory to keep the Wildcats in the hunt for an NCAA bid. Shurna just finds a way to score, and it?s impressive.
Key stats: 20.1 ppg; 5.4 rpg; 2.7 apg

7. Robbie Hummel, F, Purdue, Sr. He is putting the team on his back down the stretch, averaging 23 and 8 rebounds in wins over Nebraska and at Michigan last week. Hummel is shooting well while still giving max effort on the glass and defense, do his best to cap his career with a bang.
Key stats: 16.5 ppg; 7.0 rpg; 1.9 apg

9. William Buford, F, Ohio State, Sr. He is shooting a career-low 43.2 percent from the field. Buford also is hitting only 37.9 percent of his three-pointers, and has had four- and six-point efforts this month. Bottom line: It hasn?t been a great senior season.
Key stats: 15.1 ppg; 4.8 rpg; 3.0 apg

10. Keith Appling, G, Michigan State, So. He needs to be a little more decisive on his decision-making and improve his consistency on his three-pointers. And his scoring has slipped, as Appling has an aggregate 22 points in the last three games.
Key stats: 11.7 ppg; 3.0 apg; 3.8 apg

12. Drew Crawford, G, Northwestern, Jr. Crawford is a natural scorer who is equally adept at driving to the hole as he is at pulling up for a jumper. He needs to take his game to another level the last week if the Wildcats hope to reach the Big Dance for the first time.
Key stats: 16.1 ppg; 4.5 rpg; 2.0 apg

14. Christian Watford, F, Indiana, Jr. Up and down; up and down. That has epitomized Watford?s season. He had three points total on 0-of-13 shooting from the field in the two games before notching 12 in the win at Minnesota on Sunday. Watford needs to stay dialed in with March around the corner.
Key stats: 11.6 ppg; 5.3 rpg; 1.3 apg

15. Ryan Evans, F, Wisconsin, Jr. Evans is capping a breakout season, setting career highs in virtually every category while being a key cog on a good Badgers team. Evans has scored in double-figures in each of the last eight games. His second double-double of the season came in that huge win at Ohio State on Sunday.
Key stats: 10.7 ppg; 6.9 rpg; 1.6 apg

16. Victor Oladipo, G, Indiana, So. The super-athletic Oladipo is a defensive force who continues to come on offensively on the drive and as a shooter. If you are scoring at home, that?s six games in a row with over double-figures in scoring for one of the most underrated players in the league.
Key stats: 11.2 ppg; 5.3 rpg; 1.8 apg

18. Branden Dawson, F, Michigan State, Fr. The explosive Dawson has played well most of the year but may be hitting a bit of a wall. He has scored in double-figures just one time in the last five games.
Key stats: 8.7 ppg; 4.7 rpg; 1.0 apg

19. Meyers Leonard, C, Illinois, So. What a week for Leonard, notching 22 points with 14 boards in the win vs. Iowa that ended the Illini?s six-game losing streak. He also was good in the loss at Ohio State with 21 points and five boards. Welcome back, Meyers!
Key stats: 13.1 ppg; 7.9 rpg; 1.4 apg

20. Lewis Jackson, G, Purdue, Sr. A healthy Lewis Jackson is good for Purdue, which has won four of its last five. Jackson continues to excel on drives to the basket, and his assist-to-turnover ratio is outstanding. Plus, he can knock down the open shot.
Key stats: 10.2 ppg; 3.1 rpg; 4.2 apg

21. Aaron Craft, G, Ohio State, So. He shot well last week, hitting 10-of-15 shots and scoring an aggregate 24 points the last two games. And, of course, Craft continues to play tremendous on-the-ball defense and do what he can to inspire a listing Buckeye ship in the dying days of February.
Key stats: 8.3 ppg; 2.9 rpg; 4.6 apg

22. Brandon Paul, G, Illinois, Jr. He followed a two-point outing at Nebraska and a nine-point effort in a loss at Ohio State by pouring in 17 points in that big win over Iowa that stopped the bleeding. Paul is good-when he takes good shots and plays within himself.
Key stats:14.7 ppg; 4.7 rpg; 3.0 apg

23. Aaron White, F, Iowa, Fr. How can you not like White?s game? The kid runs the court with abandon, setting picks, hitting shots, making passes and crashing the boards. He?s a do-it-all type who will be the foundation of the future for the Hawkeyes.
Key stats: 10.4 ppg; 5.6 rpg; 0.8 apg

25. Bo Spencer, G, Nebraska, Sr. He has been a steady offensive force all season long. And that ankle injury he suffered in the loss at Michigan State doesn?t appear serious enough to keep him out down the stretch. And that?s a good thing.
Key stats: 15.1 ppg; 2.6 rpg; 3.4 apg