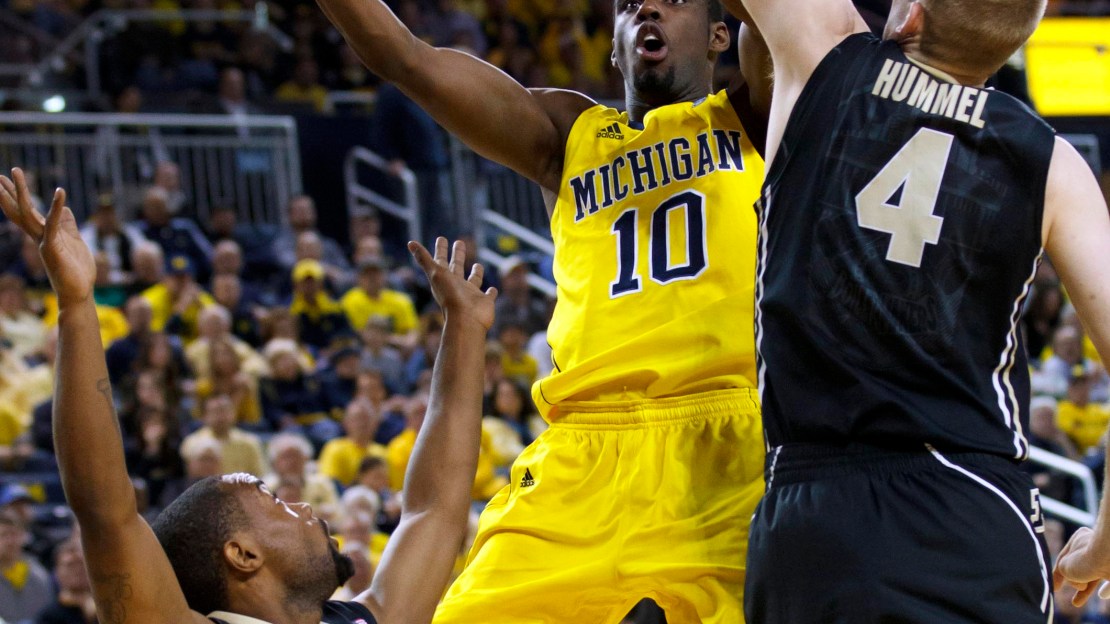 Purdue handed No. 13 Michigan its first home defeat (recap), No. 6 Michigan State blasted Nebraska (recap) and Northwestern beat Penn State in the final seconds (recap) in Saturday men's hoops action. Catch up on all three games on our BTN.com scoreboard and get stats, video and recaps in this post. Gus Johnson was on the call for the Purdue-Michigan game, and here are his top calls. Also, bookmark our popular Did You See This? archive.

FINAL: Terone Johnson scored 22 points and Robbie Hummel added 17 points and nine boards to lead Purdue to a 75-61 upset victory over No. 13 Michigan on Saturday at Crisler Center. Purdue (19-10) was winning 52-49 with 4:55 remaining before it went on an 18-5 run to extend its lead to 16 points with 1:34 to go. The Boilermakers got a spark from Johnson, who poured in 9-of-12 shooting from the field. Purdue shot 50 percent from the field (27-of-54). Zack Novak contributed 12 points and yanked down six rebounds for Michigan (21-8), which also got double-digit efforts from Trey Burke (12) and Tim Hardaway Jr. (10). The Boilermakers went to the line 12 more times than Michigan and made the most of their opportunities, shooting 14-of-16. Those free throws came courtesy of 15 fouls committed by the Wolverines who were 2-of-4 from the line.

HALFTIME: Purdue used a 12-2 run in the first 4:51 of the half to help it claim a 32-28 lead at the half. The Boilermakers led by as many as 11 points and never trailed. The long-distance game has been bottled up for No. 13 Michigan, which made 4-of-15 from beyond the arc in the first half, while shooting 67 percent (8-of-12) on two-point shots. The Wolverines demonstrated their offensive efficiency by racking up eight assists on 12 baskets. Purdue got points from seven different players. Michigan's Stu Douglass had a big first half, with five points, four rebounds and five assists. Terone Johnson led the way for Purdue in the first half, with six points.

FINAL: No. 6 Michigan State used stingy defense to defeat Nebraska 62-34 on Saturday at the Breslin Center. Michigan State (24-5) held the Cornhuskers to 29 percent shooting from the field and hauled in 28 defensive boards, while only allowing four offensive rebounds. Leading 25-17 early in the second half, Michigan State used a 29-6 spurt to open its cushion to 31 points with 7:33 remaining. Draymond Green sparked Michigan State, with 20 points and 10 rebounds. The Spartans hit 56 percent of their field goals (23-of-41) and shot 9-of-20 from three-point range (45 percent). Brandon Ubel contributed 13 points and shot 6-of-9 from the field for Nebraska. Winning the battle on the boards was crucial for the Spartans as they grabbed 32 rebounds to 18 for the Cornhuskers (12-15). Michigan State never trailed in the game and its largest lead was 32, which came with 6:19 to go. With the win, Michigan State extends its winning streak to seven games.

HALFTIME: There were no free points for Nebraska, as No. 6 Michigan State clamped down defensively to hold the Cornhuskers to 27 percent shooting in the first half and has a 23-15 lead going into the break. The Spartans outrebounded Nebraska, 16-10, and led by as many as 12 points in the first half. Nebraska's leading scorer, Bo Spencer, has been shut down thus far. The senior is averaging 15.6 per game for the year, but has just two points. Michigan State's Brandon Wood already has seven points. Brandon Richardson is putting together a nice game so far for the Cornhuskers, with four points and three rebounds.

FINAL: Penn State shot 56 percent from the line and those free-throw struggles came back to bite the Nittany Lions in a 67-66 loss on Saturday at the Bryce Jordan Center. John Shurna sparked Northwestern (17-11), as he scored 23 points and dished out six assists, while Alex Marcotullio shot 4-of-7 from the field and added 12 points. The Wildcats were hot from long range, hitting 15-of-29 threes for a 52 percent night from beyond the arc. The Wildcats also got a double-digit effort from Drew Crawford, who scored 13. Tim Frazier scored 23 points, had eight assists, and made 9-of-16 shots from the floor for Penn State (12-17). Jonathan Graham had a quality shooting game, nailing 5-of-6 shots from the field and scoring 10 points. The Nittany Lions shot 52 percent from the field (29-of-56). The Nittany Lions also got a double-digit game from Ross Travis, who scored 10.

HALFTIME: Drew Crawford has seven points to lead Northwestern to a 34-28 lead over Penn State at the end of the first half. Neither team has been able to take control of the game as the lead changed hands five times. Trailing 20-13, the Wildcats used a 12-0 run to take a five-point lead. Penn State has been effective inside, making 11-of-20 two-point field goals, but the Nittany Lions have struggled on the perimeter, shooting 1-for-9 from three-point range. Penn State applied the pressure in the first half, earning second-chance opportunities with seven offensive rebounds, to just two for Northwestern. The Wildcats hit 50 percent (8-of-16) of their three-point attempts and had eight assists on 11 field goals. The Nittany Lions' Cammeron Woodyard has five points and five rebounds.