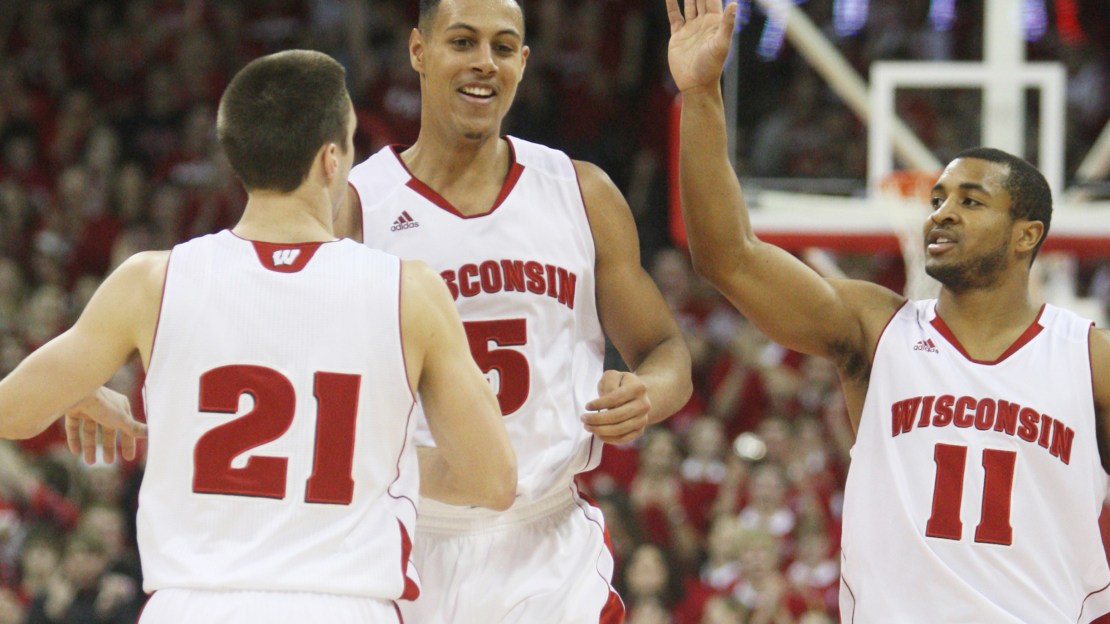 No. 8 Michigan State pulled away from Purdue (recap), No. 17 Wisconsin dropped Penn State (recap) and Iowa upset No. 20 Indiana (recap) in Big Ten men's hoops action Sunday. Gus Johnson was on the call for the Hoosiers-Hawkeyes game, and here are his best calls. Catch up on all the action on our BTN.com scoreboard and get stats, video and recaps in this post. And don't forget to check out all the latest Big Ten highlights in our Did You See This? archive.

FINAL: Draymond Green scored 20 points, grabbed 11 rebounds and handed out seven assists to help No. 8 Michigan State past Purdue 76-62 on Sunday at Mackey Arena. Branden Dawson also had a big game for the Spartans, with his third career double-double (15 points, 10 rebounds). Down 38-33 late in the first, Michigan State (22-5) broke out for a 12-0 run to take a seven-point lead with 14:33 in the game. Austin Thornton was 6-of-10 from the floor and chipped in a career-high 17 points for the Spartans, who hit 51 percent from the field (30-of-59). The Spartans also got a solid contribution from Derrick Nix, who scored 12. Robbie Hummel contributed 24 points, hauled in 15 rebounds, and handed out three assists for Purdue (17-10). Purdue also got double-digit games from Lewis Jackson (15) and Ryne Smith and Anthony Johnson (10). Winning the rebounding battle was a key to victory for Michigan State as it outrebounded the Boilermakers 37-28. The Spartans have now won five straight games with the victory.

HALFTIME: Robbie Hummel scored 18 points for Purdue in the first half to carry the Boilermakers to a 38-35 lead over No. 8 Michigan State. Neither team has been able to take control of the game thus far, as the two teams traded the lead 11 times. Michigan State trailed 21-20 when it broke out for a 7-0 run to overtake the Boilermakers and seize a six-point lead. The Spartans applied the pressure in the first half, earning second-chance opportunities with seven offensive rebounds, to just three for Purdue. Derrick Nix is putting together a nice game so far for Michigan State, with 10 points.

FINAL: Josh Gasser scored 15 points and grabbed five rebounds and Ryan Evans added 11 points and nine boards to lead No. 17 Wisconsin to a 65-55 victory over Penn State on Sunday at the Kohl Center. The Badgers were on fire from beyond the arc, shooting 50 percent (11-of-22), and had 14 assists on 20 baskets. The Badgers also got double-digit nights from Jared Berggren (13) and Jordan Taylor (11). Tim Frazier had 20 points, yanked down four rebounds, and had four assists for Penn State (12-16), which shot 39 percent from the field (22-of-56). Penn State also got a double-digit game from Jermaine Marshall, who scored 12. Winning the battle on the boards was crucial for Wisconsin as it grabbed 36 rebounds to 24 for the Nittany Lions. The Badgers never trailed in the game. Wisconsin's largest lead was 20, which came in the middle of the second half.

HALFTIME: Ryan Evans and Josh Gasser combined for a successful first half as No. 17 Wisconsin leads 35-21 over Penn State. Evans scored eight points, grabbed six rebounds, and shot 3-of-5 from the field, while Gasser scored 11 points. The Badgers are dominating the rebounding battle so far, with a 19-9 margin. Wisconsin led by as many as 14 points in the first half and never trailed. The Badgers fired often and fired with accuracy from distance, hitting 50 percent (7-of-14) of their three-point attempts. Wisconsin played team basketball in the first half, to the tune of nine assists on 12 field goals. The Nittany Lions' Tim Frazier already has 10 points.

FINAL: Matt Gatens scored a career-high 30 points and grabbed four rebounds to lift Iowa to a 78-66 upset win over No. 20 Indiana on Sunday at Carver-Hawkeye Arena. Gatens shot 10-of-18 from the field, including 7-of-10 from downtown, to make his career night possible. Iowa (14-13) also got a solid performance from Melsahn Basabe, who had 13 points, seven rebounds and five blocks. The Hawkeyes shot 9-of-18 from three-point range and grabbed 15 offensive boards. The Hawkeyes also got double-digit performances from Josh Oglesby (11) and Roy Devyn Marble (10). Cody Zeller scored 15 points and hauled in 13 rebounds and Derek Elston chipped in 13 points for Indiana (20-7), which shot just 38 percent from the field (20-of-53).

HALFTIME: Melsahn Basabe has nine points to lead Iowa to a 37-26 advantage over No. 20 Indiana at the end of the first half. Trailing 18-17, the Hoosiers went cold, going 2:52 without a point while the Hawkeyes went on a 7-0 run to open up an eight-point lead. After already giving up nine offensive rebounds to Iowa, Indiana will have to keep the Hawkeyes off the boards in the second half. The Hoosiers played team basketball in the first half, to the tune of eight assists on 10 field goals. Cody Zeller scored eight points to pace the Hoosiers, while Derek Elston added seven.