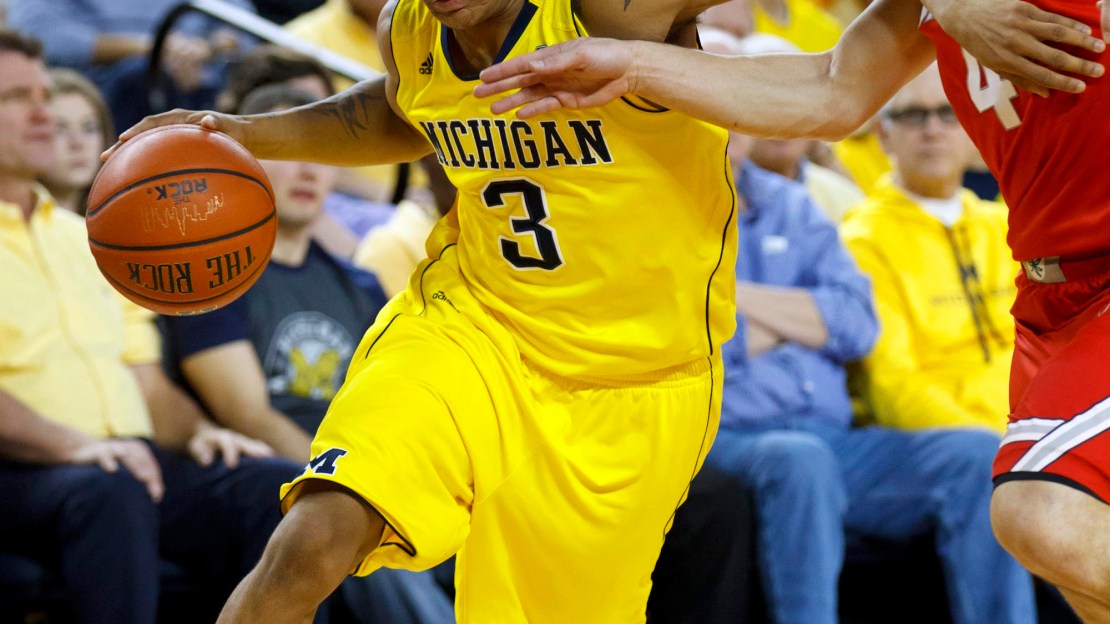 No. 19 Michigan upset No. 6 Ohio State (recap), Nebraska did the same to struggling Illinois (recap) and Northwestern took care of Minnesota (recap) in Big Ten men's hoops action Saturday. Catch up on all three games on our BTN.com scoreboard and get stats, recaps and video in this post. BTN has another doubleheader Sunday, starting at 4 ET (view the schedule!). And don't forget that BTN.com editors watch for all the best highlights throughout the season and post them in our Did You See This? archive.

FINAL: Bo Spencer scored 27 points to lift Nebraska to an 80-57 win over Illinois on Saturday at Bob Devaney Sports Center. Nebraska (12-13) was able to carry momentum into the break and sustain it to start the second half. Trailing 24-16 with 7:15 to go in the first half, the Cornhuskers went on a 43-7 run to seize a 28-point advantage in the middle of the second half. The Cornhuskers hit 57 percent of their field goals (30-of-53), including 10-of-20 from three-point range. Nebraska also got double-digit contributions from Brandon Richardson, who scored 12 and Caleb Walker, who scored 13. D.J. Richardson contributed 15 points and pulled down five rebounds for the Fighting Illini (16-11), who tallied 13 assists on 21 baskets. The loss extends Illinois' losing streak to five games.

HALFTIME: Nebraska trailed Illinois late in the first half before going on a 19-4 run to take a 33-26 lead into the break. The Fighting Illini led 24-16 when the Cornhuskers scored 14 straight to build a six-point lead. Nebraska fired often and fired with accuracy from distance, hitting 56 percent (5-of-9) of its three-point attempts. The Cornhuskers shared the ball, finishing with nine assists on 13 field goals in the first half. Bo Spencer leads seven Nebraska scorers with nine points. Brandon Paul, who entered the game averaging 15.4 ppg, has been held scoreless. The Fighting Illini distributed the ball well, with seven assists on 11 field goals in the first half. Illinois' Meyers Leonard has six points and four rebounds.

FINAL: Dave Sobolewski scored 22 points and John Shurna scored 18 to become Northwestern's all-time leading scorer as Northwestern topped Minnesota, 64-53, Saturday at Welsh-Ryan Arena. Even in defeat, Julian Welch came through for Minnesota (17-10) with 21 points, three rebounds, four assists, and 7-of-12 shooting from the field. Northwestern (16-10) also got a double-digit effort from Drew Crawford, who scored 11. Joe Coleman shot 6-of-7 from the field and scored 12 points for the Golden Gophers. The Golden Gophers crashed the offensive glass effectively, grabbing 15 offensive boards, but lost despite outrebounding the Wildcats 36-20. Leading 24-21 late in the first, Northwestern used a 12-4 spurt to open its cushion to 11 points with 24 seconds left in the first half. The Wildcats won the free throw battle, shooting 67 percent (12-of-18) from the charity stripe, compared to 46 percent (6-of-13) for the Golden Gophers.

HALFTIME: Northwestern leads Minnesota, 36-28, at the half thanks to the play of John Shurna, who scored 12 points after a slow start. The long-distance game has been bottled up for the Golden Gophers, who made 1-of-4 from beyond the arc in the first half, while shooting 61 percent (11-of-18) on two-point shots. Joe Coleman leads the Gophers with eight points, and Julian Welch has compiled an all-around game (7 points, 3 rebounds, 3 assists).

FINAL: Deshaun Thomas scored 25 points and grabbed 13 rebounds for No. 6 Ohio State, but it was not enough as Ohio State (22-5) fell to No. 19 Michigan 56-51 Saturday at Crisler Center. Jordan Morgan sparked Michigan (20-7), as he posted his first career double-double, with 11 points and 11 rebounds. Tim Hardaway Jr. was 4-of-5 from the floor and chipped in 13 points for the Wolverines. Michigan shot 47 percent from the field (22-of-47). The Wolverines also got a double-digit game from Trey Burke, who scored 17. The Buckeyes had trouble finding their touch, shooting just 39 percent (19-of-49) from the field. Ohio State also got a double-digit game from Jared Sullinger, who scored 14. The Buckeyes pounded the boards hard in defeat as they grabbed 34 to 24 for Michigan. The Wolverines never trailed in the game. Michigan's largest lead was 10, which came midway through the second half.