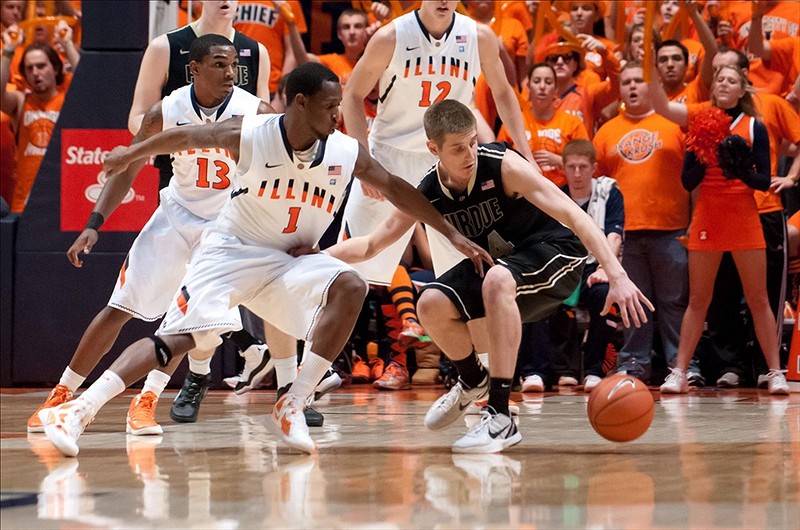 Big game tonight, with Wisconsin invading Michigan State in a Big Ten battle of ranked teams. But that?s not the only news. Check out the latest scuttlebutt in Big Ten territory, including this story: Already making fall plans? Thank Matt Murschek of the Orlando Sentinel for looking ahead to five killer Big Ten games in 2012. Find more links lower in this post.

Plus, watch Thursday morning's Big Ten Blast update in the video right here. And see a pretty worthwhile dunk video over here, too.

Illinois
Time to play the blame game. And embattled Bruce Weber is taking it, writes Paul Klee Champaign of the News-Gazette.

Indiana
What?s your number that matters? For Hoosiers, it?s 20, says Bob Kravitz of the Indianapolis Star.

Terry Hutchens of the Indianapolis Star thinks that win over Northwestern punched the Hoosiers? ticket to the Big Dance. Me? I think it already was punched.

The Hoosiers are making those preseason magazines look bad, says Rick Bozich of the Louisville Courier-Journal.

Iowa
Aaron White makes his coach look smarter with every game, says Rick Brown of the Des Moines Register. Is there a more underrated freshman in the Big Ten? Of course not.

A draft analyst say Riley Reiff is a likely a top-10 pick, writes Scott Dochterman of the Cedar Rapids Gazette. Guess coming out early is a wise move.

Michigan
Who are the four most important players for the title contenders? Nick Baumgardner of AnnArbor.com explains.

Michigan is now a 13-point underdog to Alabama in that Titanic game to open 2012 in the Jerry Jones Dome, says the Detroit News.

Michigan State
After talking with Tom Izzo, Keith Appling is working to make his point, says John Niyo of the Lansing State Journal. We all get it, as Appling has been a revelation in his first year on the job.

When it comes to trash talking, Draymond Green tries to be as good as his word, writes Shawn Windsor of the Detroit Free Press. If he?s half as good at talking smack as he is at playing, then you know Green?s gab is gold. Windsor also writes that Dane Fife beats the drum for defense.

Surprise! Defense is a staple for the Spartans, says Joe Rexrode of the Lansing State Journal.

Minnesota
Tubby Smith vs. Dan Monson: How much improvement has there really been? Michael Rand of the Minneapolis Star Tribune tells us.

By the laws of probability, here is where the Gophers stand in the Big Ten race, writes Amelia Rayno of the Minneapolis Star Tribune.

Ohio State
The new strength coach is a colorful motivator, says Tim May of the Columbus Dispatch.

Penn State
Tim Frazier has the attention of Iowa, says Aaron Brenner of the Quad City Times. He should, as there is no more underrated player in the league.

Purdue
In a huge game, the Boilermakers hang on to beat Illinois, writes Jeff Washburn of the Lafayette Journal-Courier. Even more amazing is the fact Purdue has back-to-back wins for the first time since winning three in a row at the end of December.

Wisconsin
Rob Wilson is ready for his next shot, says Jim Polzin of the Wisconsin State Journal.

Ethan Armstrong will do whatever it takes to get onto the field, writes Tom Mulhern of the Wisconsin State Journal.