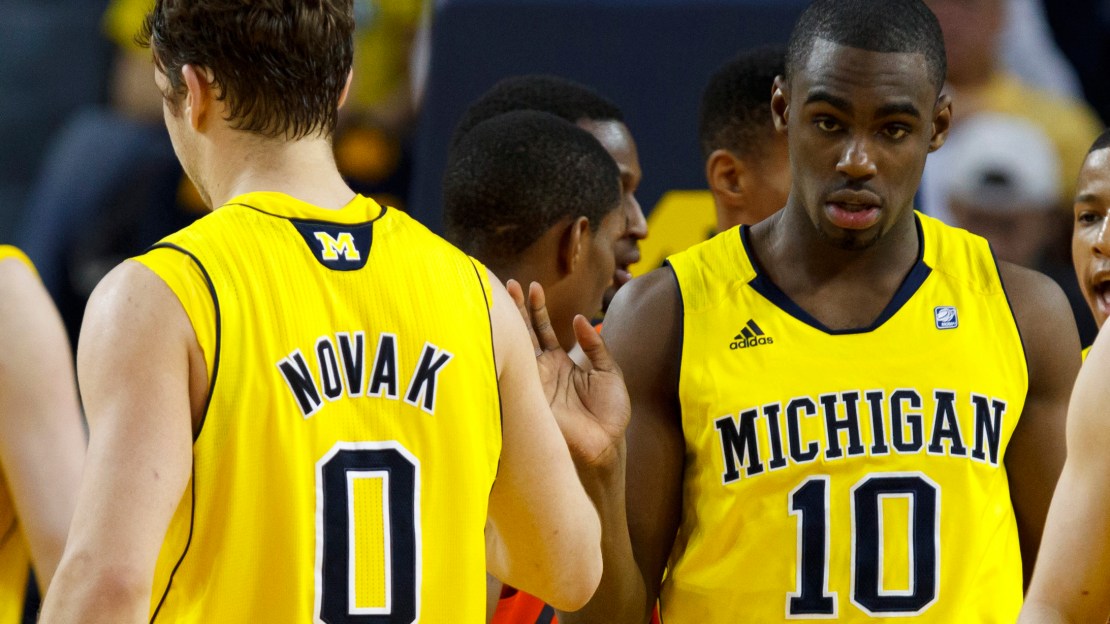 No. 25 Michigan beat reeling Illinois (recap) and Purdue topped Northwestern (recap) in Big Ten men's hoops action Sunday. Gus Johnson was on the call for the Wildcats-Boilermakers game, and we posted his best calls here. Catch up on both games with our BTN.com scoreboard and get stats, video and recaps in this post. Throughout the season, BTN.com editors watch for the best highlights and post them in our Did You See This? feature.

FINAL: Zack Novak scored 12 points, pulled down nine rebounds and dished out three assists to lead No. 25 Michigan to a 70-61 win over Illinois on Sunday at Crisler Center. Michigan (19-7) hit 50 percent of its field goals (23-of-46), including 44 percent from downtown (7-of-16). The Wolverines also went 17-of-22 from the charity (77 percent). Tim Hardaway Jr. led the Wolverines with 15 points, while Trey Burke (14) and Evan Smotrycz (13) also chipped in double figures. Brandon Paul contributed 21 points, grabbed four rebounds, and handed out three assists for Illinois (16-9). The Fighting Illini, who shot just 39 percent from the field (21-of-54), also got double-digit efforts from Tyler Griffey (career-high 18) and D.J. Richardson (12). The Fighting Illini lost despite outrebounding the Wolverines 31-25.

FINAL: Robbie Hummel scored 27 points and grabbed nine rebounds and Ryne Smith added 14 points and seven boards as they teamed up to lead Purdue to an 87-77 victory over Northwestern on Sunday at Mackey Arena. Purdue (16-9) was on fire from beyond the arc during the game, shooting 48 percent (11-of-23), and it hit 24-of-33 from the free-throw line. The Boilermakers tallied 20 assists on 26 baskets and secured second-chance opportunities, grabbing 14 offensive boards. Purdue also got double-digit contributions from D.J. Byrd (20), Terone Johnson (11) and Kelsey Barlow (10). John Shurna contributed 30 points, grabbed seven rebounds, handed out four assists, and made 11-of-20 shots from the floor for Northwestern (15-9). Dave Sobolewski had a quality shooting game, nailing 4-of-6 shots from the field and scoring 12 points. Winning the battle on the boards was crucial for the Boilermakers as they grabbed 39 rebounds to 25 for Northwestern.

HALFTIME: Robbie Hummel scored 13 points and grabbed six rebounds as Purdue leads Northwestern 31-26 at the half. Hummel and Kelsey Barlow are leading the way for the Boilermakers, as Barlow added scored six points, grabbed five rebounds, and shot 3-of-4 from the field. Purdue controlled the boards, outrebounding the Wildcats 23-12 in the first half. The Boilermakers had 11 offensive rebounds, leading to second-chance opportunities. Purdue distributed the ball well, with 11 assists on 12 field goals in the first half. Dave Sobolewski scored seven points to lead the way for Northwestern.