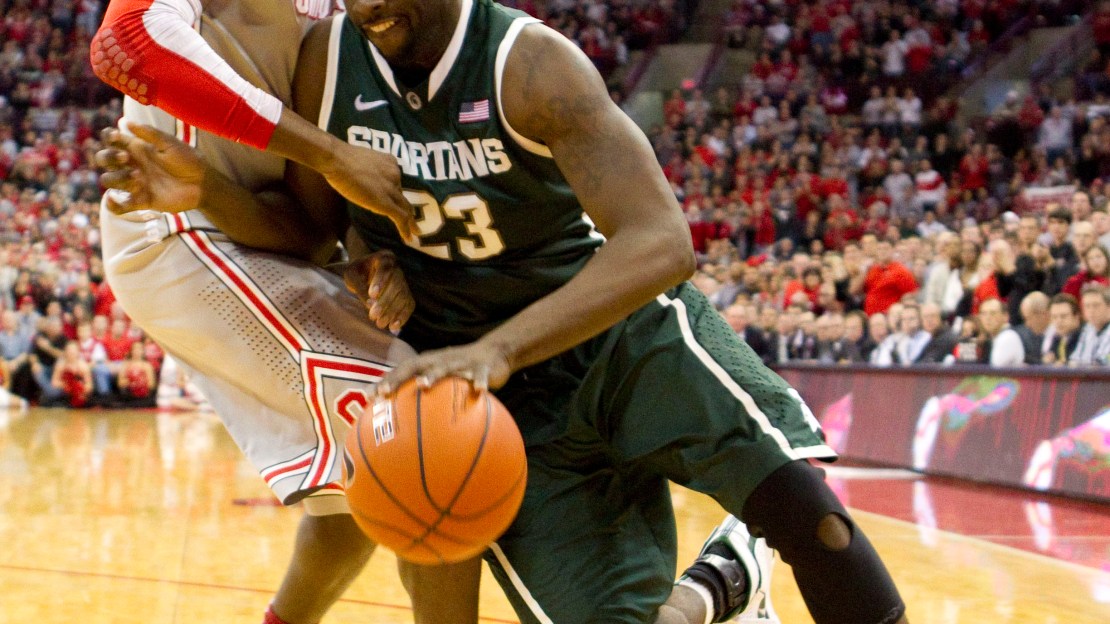 No. 12 Michigan State handed No. 3 Ohio State its first home loss of the Jared Sullinger era (recap) and  Tim Frazier led Penn State past Nebraska (recap) in men's hoops action Saturday. Catch up on all the action on our BTN.com scoreboard and get stats, video and recaps in this post. BTN.com senior writer Tom Dienhart covers Big Ten basketball throughout the season, and here are his latest posts. During all the action, BTN.com editors watch for the best highlights and post them in our Did You See This? feature.

FINAL: Tim Frazier scored 23 points, grabbed 10 rebounds and handed out nine assists as Penn State defeated Nebraska 67-51 on Saturday at the Bryce Jordan Center. Penn State (11-15) shot 52 percent from the field (23-of-44), including 39 percent from downtown (9-of-23). The Nittany Lions also got double-digit performances from Cammeron Woodyard (14) and Jermaine Marshall (12). Brandon Richardson had six points, corralled five rebounds, and had five assists for Nebraska (11-13). Dylan Talley added 12 points and Caleb Walker 10 in the defeat. Winning the rebounding battle was a key to victory for the Nittany Lions as they outrebounded the Cornhuskers 29-20. With the victory, Penn State snapped a five-game losing streak.

HALFTIME: Tim Frazier scored 10 points, dished out four assists and grabbed five rebounds as Penn State leads Nebraska 36-26 at the half. Cammeron Woodyard poured in 11 points for the Nittany Lions, who went 9-for-11 on free throws and 5of-8 from downtown in the first half. Trailing 11-9, Penn State used a 7-0 run to blow past the Cornhuskers and take a five-point lead. Penn State played team basketball in the first half, to the tune of seven assists on 11 field goals. Nebraska shared the ball, finishing with six assists on 10 field goals in the first half. Dylan Talley paces the Huskers with nine points.

FINAL: No. 12 Michigan State used stingy defense to defeat No. 3 Ohio State 58-48 in an upset on Saturday at Value City Arena. Michigan State (20-5) held the Buckeyes to 26 percent shooting from the field and to 29 points below their season average. Even in defeat, Jared Sullinger came through for Ohio State (21-4) with 17 points and 16 rebounds. Adreian Payne sparked the Spartans, as he scored 15 points, hauled in four rebounds, and went 6-of-6 from the field. The Spartans also got solid contributions from Keith Appling (14 points) and Draymond Green (12). The Buckeyes also got a double-digit performance from Aaron Craft, who scored 15. With the victory, Michigan State snapped Ohio State's six-game winning streak.

HALFTIME: No. 12 Michigan State took full advantage of the stellar combination of Adreian Payne and Draymond Green, ending the first half against No. 3 Ohio State up 35-25. Payne scored 11 points, grabbed three rebounds, and shot 5-of-5 from the field. Green scored nine points and grabbed seven rebounds. Each team took a turn in the driver's seat as the lead changed hands five times. The Buckeyes trailed early in the game when they broke out for a 7-0 run to overtake the Spartans and seize a 9-4 lead. Jared Sullinger (nine points, eight rebounds) is putting together a nice game so far for Ohio State.