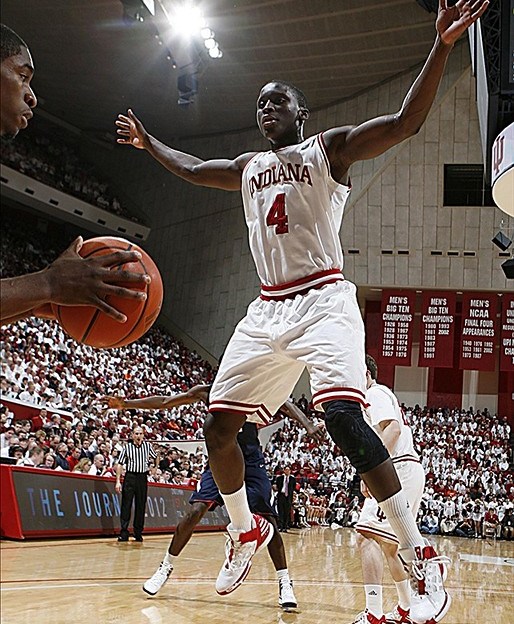 A big night in the Big Ten on Thursday, with three games, so there?s lots to talk about. And there?s also this little basketball game on Saturday in Columbus, Ohio, between Michigan State and Ohio State that?s creating a little bit of buzz. Let's look at the Friday morning headlines.

Illinois
One good half won?t cut it, as Illinois found out at Indiana. Read more from Paul Klee of the Champaign News-Gazette.

It pays well to be a coordinator at Illinois, where Tim Beckman will pay his sidekicks $400,000, says Bob Asmussen of the Champaign News-Gazette. Few other Big Ten schools pay their assistants as well, which I admire.

Indiana
Are the Hoosiers ahead of schedule? Are they NCAA-bound? Bob Kravitz of the Indianapolis Star thinks so. And I have to agree.

Freshman Cody Zeller may just be a babe, but he doesn?t throw fits, says Pete DePrimio of the Ft. Wayne News-Sentinel.

Iowa
Some neato newsy-notsey stuff from Marc Morehouse of the Cedar Rapids Gazette in his Quick Slants column. I love it.

Wanna see your beloved Hawkeyes play in 2012? You?re gonna have to pony up more cash, Herky. Sorry. Here?s the low-down from Ryan Suchomel of the Des Moines Register.

Michigan
Brady Hoke calls Ohio State "Ohio." Now, this: Urban Meyer is channeling his inner Woody Hayes and calling Michigan "that team up north," writes Angelique Chengelis of the Detroit News. I don?t know about you, but this Urban-Brady thing is gonna be fun to watch! And leave your flashlight at home as there will be no night football in 2012 in the Big House. But don?t count out 2013, says  Chengelis writes.

Tim Hardaway Jr., is buying into the ?less is more? philosophy, writes the prolific Nick Baumgardner of AnnArbor.com.

Travis Trice and Ohio State?s Aaron Craft share a prep rivalry, says Shawn Windsor of the Detroit Free Press. So, they have even more reason to dislike each other on Saturday.

The Yankees have the Red Sox. Apple has Droid. McDonalds has Burger King. The Spartans have the Buckeyes, writes Joe Rexrode of the Lansing State Journal. Don?t ya love a good rivalry?

Minnesota
That loss last night at home to Bucky? It might haunt Goldy, says legendary Sid Hartman of the Minneapolis Star-Tribune.

The Gophers got a whiff of what-if vs. the Badgers, says Tom Powers of the St. Paul Pioneer Press. And, I?m thinking it didn?t smell too good.

Nebraska
The ugly loss at home to Michigan feels like the end for Doc Sadler, writes the inimitable Steve Sipple of the Lincoln Journal Star.

Northwestern
Dave Sobolewski gets lots of minutes and accolades, writes Tina Akouris of the Chicago Sun-Times. "Sobo the Robo Point Guard." What do ya think?

Ohio State
This receiver prospect may not be ready to pick a school, says Tim May of the Columbus Dispatch.

Purdue
Make room, Boilermaker greats: A new class of Purdue icons is about to join you, according to the Lafayette Journal-Courier staff.

Danny Hope?s 2012 staff is complete with the hiring of a defensive line coach, says WLFI.com.

Wisconsin
Jordan Taylor is the homecoming king in his return to The Barn, writes Jim Souhan of the Minneapolis Star-Tribune. Too bad the kid got away.