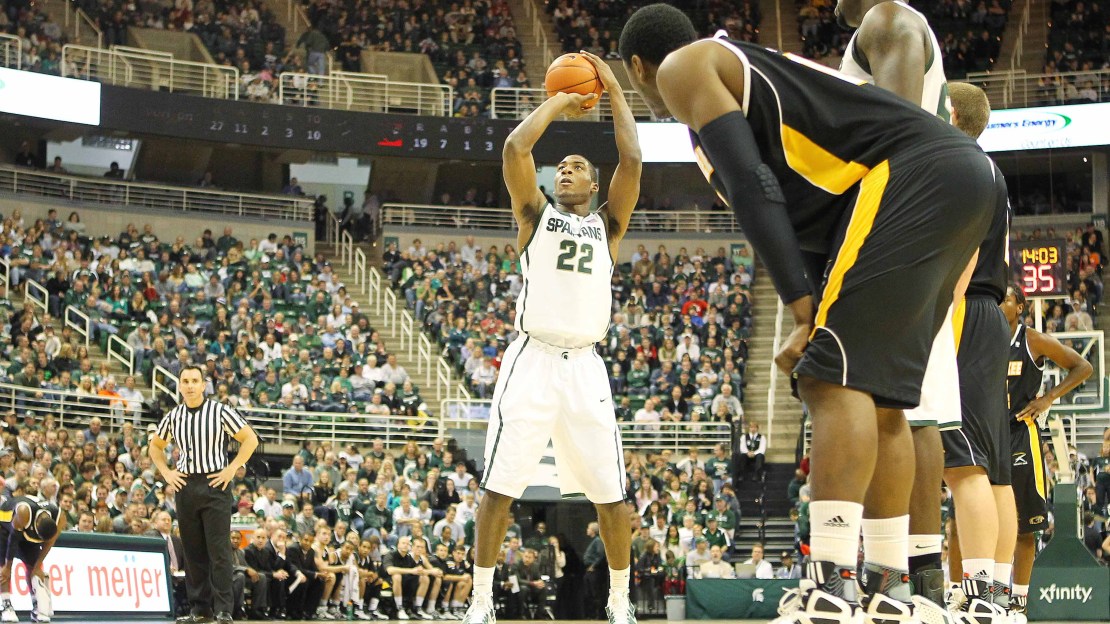 Jared Sullinger, Draymond Green. Draymond Green, Jared Sullinger. The player on top of my weekly player rankings seemingly changes each week. And it may continue to flip-flop the rest of the month, too. For now, I have to go with Sullinger, given his sterling effort in Ohio State?s first win at Wisconsin since 2000 and the fact Green hurt his knee in a loss at Illinois.

How does my list this week compare to my list last week? Go look and find out. All of my rankings are over here.

1. Jared Sullinger, C, Ohio State, So. He showed just how dominant he can be in that big win at Wisconsin on Saturday, notching 24 points and 10 rebounds. Sullinger looks like a man possessed who is primed to take over the league down the stretch.
Key stats: 17.4 ppg; 9.1 rpg; 1.0 apg

2. Draymond Green, F, Michigan State, Sr. That sigh of relief you heard emanated from East Lansing, as the knee injury Green sustained at Illinois last Tuesday wasn?t serious. In fact, he came back on Sunday and looked like the Big Ten Player of the Year in a dominating win over Michigan with 14 points and 16 (SIXTEEN) rebounds in 38 minutes of action.
Key stats: 14.8 ppg; 10.5 rpg; 3.5 rpg

4. Cody Zeller, C, Indiana, Fr. His skills belie his age, as Zeller is an extraordinary talent who can run the floor and post up. He also has a nice touch from mid-range. His 16 points in a win at Purdue were impressive, as Zeller seems impervious to any ?freshman wall.?
Key stats: 15.1 ppg; 6.4 rpg; 1.1 apg

5. Tim Frazier, G, Penn State, Jr. He only weighs 160 pounds, but Frazier is a heavyweight when it comes to production. Frazier can shoot and also is fearless when it comes to driving the lane. There can?t be a better player on a losing team in the nation, can there?
Key stats: 18.3 ppg; 4.8 rpg; 6.3 apg

6. Deshaun Thomas, F, Ohio State, So. Is there a more improved player in the Big Ten? I think not. Thomas averaged 7.5 points last season and has almost doubled that. He?s also an underrated force on the glass with his underrated strength and power. Thomas may be the best pro on this roster-and that?s saying a lot.
Key stats: 14.7 ppg; 4.4 rpg; 1.6 apg

7. William Buford, G, Ohio State, Sr. Sure, he may be trying to do too much this season, feeling it necessary to fill a big role as a 3-point shooter with Jon Diebler gone. But the Buckeyes? lone senior has fought through his tough stretches while also filling a leadership role.
Key stats: 14.9 ppg; 4.7 rpg; 3.2 apg

8. Trey Burke, G, Michigan, Fr. Has he hit the proverbial ?freshman wall?? Perhaps. Still, Burke has been a revelation running the Wolverine offense. Just think where Michigan would be without him. Scary, isn?t it? Burke is quick, fast and tough.
Key stats: 14.1 ppg; 3.5 rpg; 4.9 apg

9. Brandon Paul, G, Illinois, Jr. Does anyone play better defense? Not many. And the uber athletic Paul has been one of the Illini?s few offensive constants for an attack that has been spotty. In fact, he?s the Big Ten?s leading scoring in league games (20.0 ppg).
Key stats: 15.1 ppg; 5.0 rpg; 3.1 apg

10. John Shurna, F, Northwestern, Sr. If there?s a more natural scorer in the Big Ten, I?d like to see him. Shurna is on pace to become the Wildcats? all-time leading scorer. Last week, he tallied a combined 52 points in two games to keep Northwestern in the NCAA conversation. The guy is just money.
Key stats: 19.6 ppg; 5.7 rpg; 2.5 apg

11. Branden Dawson, F, Michigan State, Fr. The explosive Dawson is getting better, as he has notched double-figure scoring total in each of the last four games. And he?s also the Spartans? best finisher. Bottom line: Dawson is special.
Key stats: 8.8 ppg; 4.6 rpg; 1.1 apg

13. Meyers Leonard, C, Illinois, So. Foul issues plagued him in the win over Michigan State, but he looked like an All-Big Ten player in a loss at home to Northwestern en route to scoring 21 points with nine boards. Teammates have to keep him involved. Leonard is a gift from the basketball gods. Use him. Please.
Key stats: 13.3 ppg; 8.0 rpg; 1.2 apg

16. Tim Hardaway Jr., G, Michigan, So. He continues to struggle from long range, hitting only 27 percent of his 3-pointers. And he?s coming off an abysmal four-point outing (1-for-10 shooting) in a loss at Michigan State. But you just know Hardaway will find his groove at some point. He?s too good to remain in a funk.
Key stats: 14.7 ppg; 3.5 rpg; 2.5 apg

17. Keith Appling, G Michigan State, So. Yes, he has had rough patches (see the loss at Illinois last Tuesday), but Appling also has had moments of brilliance (25 points vs. Indiana; 17 points vs. Northwestern). The kid is gonna be special when he figures it all out.
Key stats: 11.9 ppg; 3.2 rpg; 3.8 apg

18. Jordan Hulls, G, Indiana, Jr. His shooting has improved across the board, as has his leadership and moxie. And Hulls doesn?t need to score to make the Hoosiers go, though he?s coming off a nice week that saw him tally an aggregate 28 points in two games.
Key stats: 12.1 ppg; 2.7 rpg; 3.3 apg

19. Christian Watford, F, Indiana, Jr. The big fella has an NBA body and an NBA game, but he disappears too often. Last week, he had just four points at Purdue and eight at Michigan, hitting a combined 3-of-14 shots. For the Hoosiers to make a deep NCAA run, Watford has to be dialed in.
Key stats: 12.1 ppg; 5.6 rpg; 1.3 apg

20. Matt Gatens, G, Iowa, So. Just love watching this guy shoot the rock. Gatens is the heart and soul of a Hawkeye team that?s shown a spark of late. He?s great at coming off screens, and slipping into the corner, catching and shooting.
Key stats: 13.9 ppg; 3.9 rpg; 2.0 apg

21. Bo Spencer, G, Nebraska, Sr. He is doing his part to make Cornhusker basketball relevant, providing consistent offense. Spencer also is on a roll, coming off one of his best weeks of the season in tallying an aggregate 42 points and hitting 14-of-25 shots.
Key stats: 15.5 ppg; 2.8 rpg; 3.5 apg

22. Rodney Williams, F, Minnesota, Jr. Can he shoot? Not well. But the ultimate high-flyer is one of the most exciting players in the Big Ten. He?s gotta be on here for just a pure, excitement and entertainment standpoint.
Key stats: 10.5 ppg; 5.3 rpg; 1.9 apg

23. Lewis Jackson, G, Purdue, Sr. I know all about his bad back, achy foot and bad games. But Lew-Jack is still a top talent. When he?s on, there are few better point guards in the Big Ten than the powerfully built Jackson.
Key stats: 9.9 ppg; 3.2 rpg; 3.9 apg

25. Zack Novak, G, Michigan, Sr. Tough, gritty, emotional, Novak leaves it all on the court each time out. He has developed a nice all-around game, showing a nice shooting touch with a nifty first step to the hoop on the dribble-drive.
Key stats: 9.4 ppg; 4.7 rpg; 1.9 apg