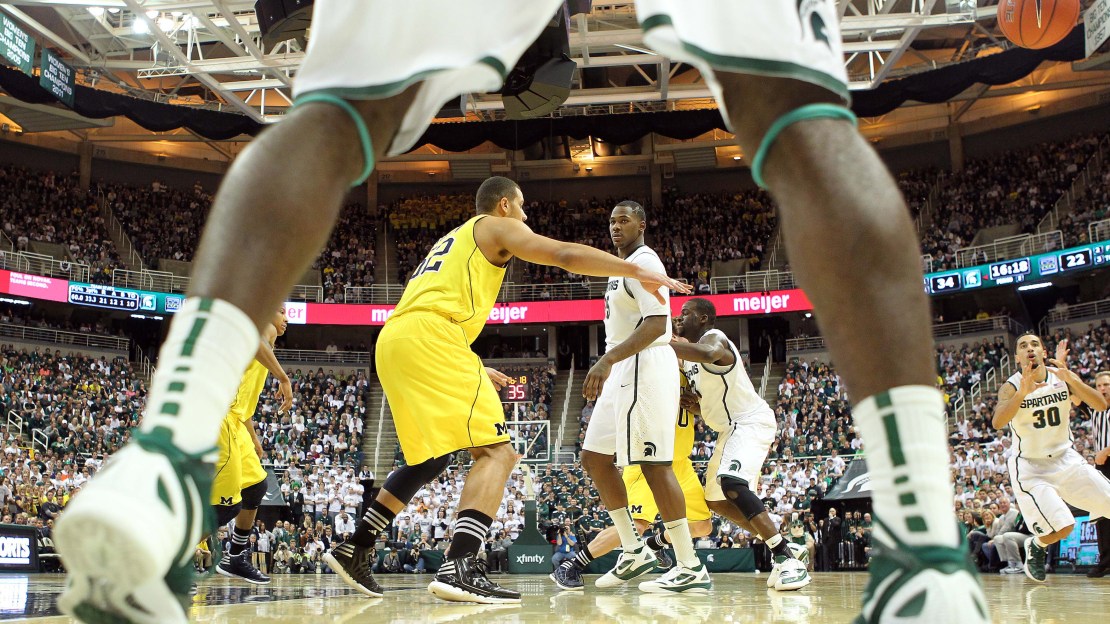 It's time to release my latest Big Ten men's hoops power rankings. The rankings are not meant to mimic the Big Ten standings. What fun would that be? They aren?t scientific, either. They?re simply my thoughts on where each Big Ten team stands right now and who would win on a neutral court. Agree? Disagree? Tweet @BTNBrentYarina or leave your comments below. Also, did you see my top 10 plays from the past week?

1. Ohio State (20-3, 8-2) – Attention, Big Ten coaches: Jared Sullinger need to be double-teamed at all times. On Saturday, Wisconsin's Bo Ryan opted to use only Jared Berggren on the preseason player of the year candidate, and the sophomore scored Ohio State's first nine points and finished the first half with 16.
Last time: No. 1
This week: vs. Purdue (2/7), vs. Michigan State (2/11)

2. Michigan State (18-5, 7-3) – Draymond Green's sprained left knee is fine, and that's the best news Tom Izzo and Michigan State have received in a long time. In his first game since hurting the knee at Illinois, Green had 14 points — his most ever against Michigan — and 16 rebounds — as many as the Wolverines managed.
Last time: No. 2
This week: vs. Penn State (2/8), at Ohio State (2/11)

3. Wisconsin (18-6, 7-4) – Stop me if you've heard this before: Wisconsin is an inconsistent shooting team, and when its shots aren't falling from downtown, it's very beatable — even at the Kohl Center. The Badgers attempted 27 3-pointers despite hitting only 18.5 percent in Sunday's home loss to Ohio State, marking the fourth game they have shot at least 17 treys and finished below 20 percent.
Last time: No. 3
This week: at Minnesota (2/9)

4. Michigan (17-7, 7-4) – The Wolverines can play with anyone when Tim Hardaway Jr. is on top of his game. Problem is, the sophomore continues to post horribly frustrating first-half lines, which explains his 41 percent shooting, including 27 percent from distance.
Last time: No. 4
This week: at Nebraska (2/8), vs. Illinois (2/12)

5. Indiana (18-6, 6-6) – Some will go with the win over Kentucky or Ohio State as the biggest win of the Tom Crean era, but Saturday's victory at Purdue also must be in the discussion. Not only was it Indiana's first win over Purdue since Kelvin Sampson roamed the sidelines, it was the first non-Penn State Big Ten road win of Crean's tenure. And it came against the Hoosiers' fiercest rival.
Last time: T-No. 5
This week: vs. Illinois (2/9)

6. Illinois (16-7, 5-5) – Losers of four of five, Illini fans need reasons to be optimistic. Here's one: Brandon Paul, only a junior, continues to develop into the Big Ten's most prolific scorer. He isn't always efficient and he'll have his share of miscues, but there aren't many better all-around players once you factor in his defense.
Last time: No. 7
This week: at Indiana (2/9), at Michigan (2/12)

7. Purdue (15-8, 5-5) – Considering Travis Carroll and Jacob Lawson — a duo averaging 4.7 points in Big Ten games — receive most of the minutes when Matt Painter goes big, it's amazing Purdue is .500 in conference play. Simply put, the Boilers need somebody of size not only to score a few points but to find an occasional easy look.
Last time: No. 8
This week: at Ohio State (2/7), vs. Northwestern (2/12)

T-8. Iowa (13-11, 5-6) – Lost in the Cody Zeller-Trey Burke talk, Aaron White may be playing as well as any Big Ten freshmen. Check out this line from Saturday's win over Penn State: 17 points, nine rebounds, four assists, two steals and three blocks. As White goes, so go the Hawkeyes. In Big Ten wins, White is averaging 13.2 ppg and 6.2 rpg, compared to 9 ppg and 4.5 rpg in conference losses.
Last time: No. 11
This week: at Northwestern (2/9)

T-8. Minnesota (17-7, 5-6) – Chip Armelin isn't starting, but he's gone for career highs in two of Minnesota's past three games, the most recent a 15-point performance in Sunday's victory at Nebraska. While the Gophers lack a player who can fill it up on nightly basis, they have a host of guys capable of scoring double figures.
Last time: T-No. 5
This week: vs. Wisconsin (2/9)

T-8. Northwestern (14-8, 4-6) – The supremely thin Wildcats are playing six men a night these days, and yet they've won two in a row, including Sunday's rare win at Illinois. John Shurna (26 points per game in the last two) has made up for the lack of depth, but the starters' minutes warrant monitoring. After all, the Wildcats entertain Iowa, a fast-paced team, followed by a trip to Purdue, a physical team, this week.
Last time: No. 9
This week: vs. Iowa (2/9), at Purdue (2/12)

12. Penn State (10-14, 2-9) – Still up and down, Jermaine Marshall continues to show flashes of becoming a reliable sidekick for Tim Frazier. The sophomore has scored double figures in three straight, and he's averaging 11.1 points per game in conference play.
Last time: No. 12
This week: at Michigan State (2/8), vs. Nebraska (2/11)