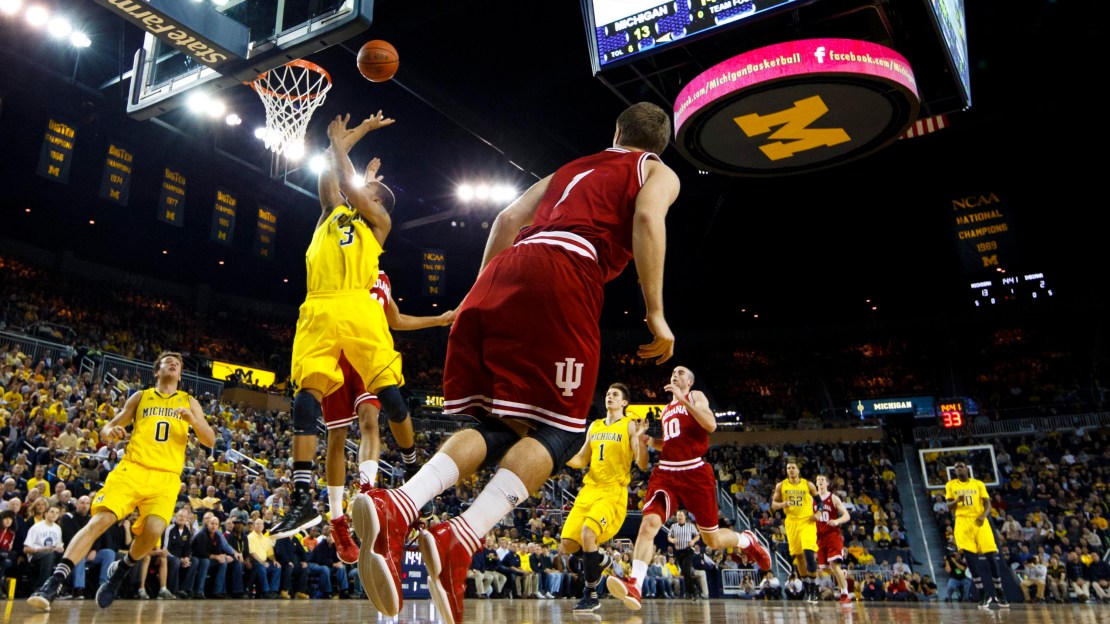 No. 22 Michigan downed No. 20 Indiana (recap) and Iowa rallied past Minnesota (recap) in our latest Super Wednesday doubleheader, presented by Buffalo Wild Wings. Gus Johnson was on the call for the Hoosiers-Wolverines, and we've posted his best calls from the night. Catch up on both games on our Big Ten scoreboard and get stats, video and recaps in this post.

Also, check out a collection of Big Ten highlights in our Did You See This? archive. Iowa fans with love this And-1 and posterizing slam. And Michigan's Zack Novak gave us a behind-the-scenes tour of Crisler Crisler before Wednesday's game.

FINAL: Trey Burke scored 18 points and grabbed four rebounds and Zack Novak added 13 points and five boards as they teamed up to lead No. 22 Michigan to a 68-56 victory over No. 20 Indiana on Wednesday at Crisler Center. Michigan (17-6) led 52-50 with 3:20 remaining before it widened the margin to 12 points with a 16-6 run that ended with 21 seconds to go. Burke had a big performance for the Wolverines, with four assists and 5-of-9 shooting from the field. Michigan shot 48 percent from the field (22-of-46). The Wolverines shot 9-of-22 from three-point range during the game, good for 41 percent. Michigan also got a double-digit game from Tim Hardaway Jr., who scored 13. Cody Zeller had 11 points and hauled in 12 rebounds for Indiana (17-6). The Hoosiers also got a double-digit performance from Jordan Hulls, who scored 18. Indiana lost despite outrebounding the Wolverines 29-22. Michigan never trailed in the game. The Wolverines' largest lead was 20, which came with 7:10 to go in the first half. Michigan started the game out strong with a 28-8 run, which allowed it to take a 20-point lead in the first.

HALFTIME: Trey Burke has 10 points and three rebounds to lead No. 22 Michigan to a 33-22 lead over No. 20 Indiana after 20 minutes. The Wolverines never trailed in the first half and led by as many as 20 points. The game was tied before the Hoosiers went into a funk, going the next 2:59 without scoring, and allowing Michigan to take a 13-0 lead early in the game. Seven Michigan players scored in the first half. Indiana's Cody Zeller already has four points and seven rebounds.

FINAL: Minnesota could not find its touch from the field or the line in a 63-59 defeat to Iowa on Wednesday at Carver-Hawkeye Arena. Minnesota (16-7) shot 64 percent (9-of-14) from the charity stripe and 39 percent (20-of-51) from the field. Julian Welch had a good game for the Golden Gophers in defeat with 12 points, four rebounds, six assists, and 3-of-5 shooting from beyond the arc. Zach McCabe sparked Iowa (12-11), as he contributed eight points, yanked down nine rebounds, and handed out three assists in the win. Roy Devyn Marble shot 5-of-9 from the field and scored 12 points for the Hawkeyes. Iowa had trouble finding its touch, shooting just 38 percent (21-of-56) from the field. The Hawkeyes shot 17-of-26 from the free throw line. Iowa was able to secure second chance opportunities, grabbing 15 offensive boards. The Hawkeyes also got a double-digit effort from Matt Gatens, who scored 18. Minnesota was hot from long range, hitting 10-of-19 threes for a 53 percent night from beyond the arc. The Golden Gophers also got double-digit games from Austin Hollins, who scored 11 and Ralph Sampson III, who scored 13. Trailing 17-5 with 9:27 to go in the first half, Minnesota went on a 22-7 run to seize a three-point advantage with 1:11 left in the first half. Andre Hollins finished the run off with a field goal, which helped Minnesota lead 27-24 at halftime.

HALFTIME: Minnesota trailed Iowa midway through the first half before going on a 22-7 run to take a 27-24 lead into the break. The Golden Gophers shot 4-of-8 from beyond the arc and played team ball in the first half, to the tune of nine assists on 10 field goals. Iowa also distributed the ball well, with seven assists on 10 field goals. Zach McCabe is putting together a nice game so far for the Hawkeyes, with four points and seven rebounds. Minnesota's Julian Welch already has six points, three rebounds and three assists.