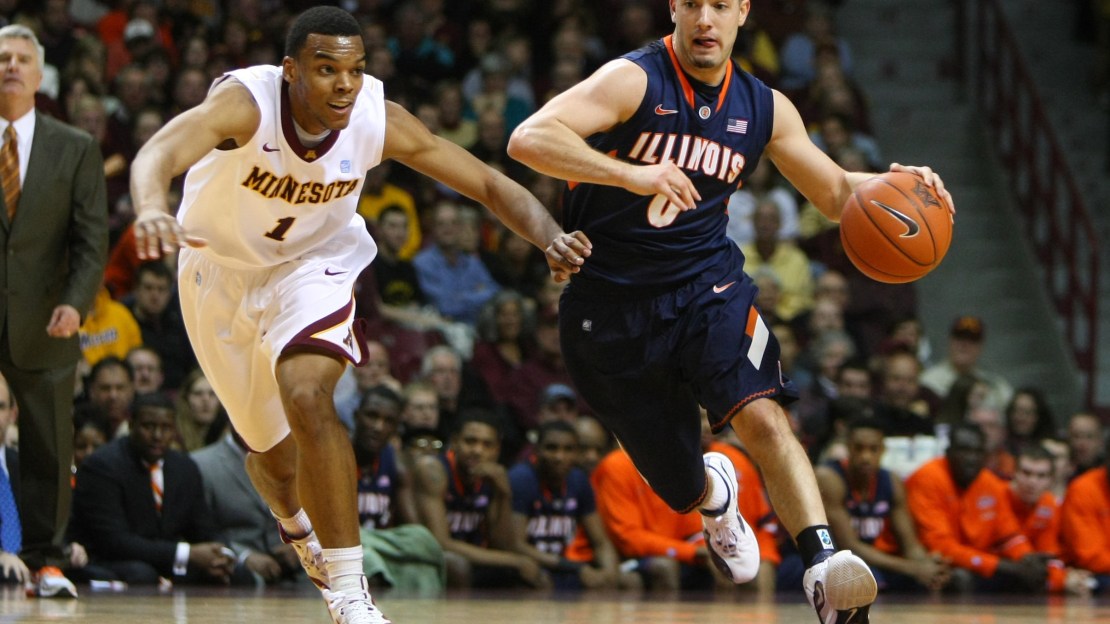 A month after losing in double overtime at Assembly Hall, Minnesota topped Illinois in overtime Saturday night (recap). In other action, Robbie Hummel hit the game-winner in the final seconds to lift Purdue past Northwestern (recap | watch the shot!). Catch up on all the action on our Big Ten scoreboard and get stats, video and recaps in this post.

If you like highlights, check out our Did You See This? archive. Minnesota fans will love this pass and dunk. Nearing the midway point of the Big Ten season, where does your team land in the Big Ten standings? What about the national polls? And don't forget about our Big Ten stats.

FINAL: Robbie Hummel hit the game-winning shot with 8.1 seconds to go and Purdue beat Northwestern 58-56 on Saturday at Welsh-Ryan Arena. The field goal was the finishing touch on Hummel's 11-point performance in a dramatic win for Purdue (15-7). Drew Crawford had a good game for Northwestern (12-8) in the loss. Crawford contributed 23 points, grabbed eight rebounds, handed out three assists, made 9-of-16 shots from the floor, and shot 4-of-7 from long range. The Wildcats can look to its performance from the charity stripe as one of the factors in the loss, as they shot 57 percent (8-of-14) from the line. Terone Johnson sparked the Boilermakers, as he had 14 points, five assists, and shot 6-of-10 from the field. The Boilermakers also got a double-digit performance from D.J. Byrd, who scored 12. John Shurna had a quality shooting game, nailing 6-of-10 shots from the field and scoring 15 points. The Wildcats hit 40 percent (8-of-20) of their shots from downtown and had 16 assists on 20 baskets. The Wildcats were able to secure second-chance opportunities, grabbing 10 offensive boards. Northwestern won the battle on the boards in the loss, as the Wildcats pulled down 33 to 18 for Purdue.

HALFTIME: While Drew Crawford had a strong first half, Northwestern still trails Purdue 26-22 at the half. In the first 20 minutes, Crawford scored 11 points, grabbed four rebounds, and shot 5-of-9 from the field. The Wildcats distributed the ball well, with seven assists on eight field goals in the first half. Northwestern has found a way to neutralize the Boilermakers' leading scorer, Robbie Hummel. The senior enters halftime with two points, well below his season average of 15.4. Seven Purdue players have scored. Purdue's Lewis Jackson already has six points.

FINAL: Austin Hollins scored 14 points and grabbed four rebounds and Chip Armelin added 14 points and seven boards as they teamed up to lead Minnesota to a 77-72 overtime victory over Illinois on Saturday at Williams Arena. Down 62-58 with 27 seconds remaining in regulation, Minnesota (16-6) broke out for a 17-5 run to take an eight-point lead with 45 seconds left in overtime. The Golden Gophers went into the locker room with the momentum and came out of the second half flying. Minnesota trailed 23-22 in the first, but a 17-6 run allowed it to take a 10-point lead with 16:33 in the game. Illinois (15-6) had a rough night from the free-throw line, shooting 66 percent (19-of-29). Minnesota made the extra pass all game long, tallying 18 assists on 25 baskets. The Golden Gophers also got solid contributions from Joe Coleman, who scored 11 and Andre Hollins, who scored 12. Illinois' Brandon Paul scored a game-high 28 points and Meyers Leonard had 17 points and corralled 13 rebounds.