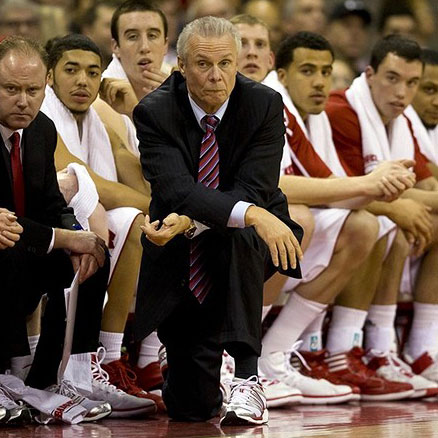 As I wax nostalgic for Mike Bruesewitz?s floppy mop, it?s time to take a look around the Big Ten. Who?s hot? Who?s not? And what the heck should you be looking for and talking about around the Xerox machine? It?s all right here, people. Lace up your Chucks! And come tell me what you think!

Also, fill your heads with more Big Ten hoops knowledge from my BTN.com colleagues the Big Ten Geeks, who break down the Badgers' resurgence, and get caught up on all of the amazing plays from the past season in our "Did You See This?' video archive (for example: Aaron Craft's "I meant do that" shot in this post). And we have our usual stat leaders, scoreboard and, of course, the ever-changing  standings.

Three Stocks to buy
1. Wisconsin. This, ladies and gentlemen, is the hottest team in the conference, reeling off five victories in a row with the last two coming over ranked teams Illinois and Indiana. How did this team lose ever lose three in a row, including a home loss to Iowa? Vexing.

3. Ohio State. I don?t know about you, but the Buckeyes have looked dialed in since that loss at Illinois. It?s three wins in a row ? and counting for the best team in the Big Ten. C?mon, don?t act so shocked by that last statement. You know it?s true.

Three Stocks to Sell
1. Purdue. Look at the resume. Not impressive. The Boilermakers have no victories over ranked teams, and honestly haven?t beaten any team that they shouldn?t have beaten. And they have some bad losses, too. Is this really an NCAA team? (I?m rubbing my chin right now.)

2. Northwestern. It?s fun to root for the loveable Wildcats in their quest for the school?s first NCAA tourney berth. But Northwestern looked bad the last two times out, losing at Wisconsin and at Minnesota by an aggregate 43 points. NU?s next two are at home, winnable and critical: Purdue and Nebraska. What?s it gonna be, Willie?

3. Illinois. This team just scares me to death. Beat Ohio State one day ? lose to Penn State the next. I just can?t trust the Illini from game to game. I love the defense, but the offense is spotty. And, ask yourself this: Who is the leader?

Three Truths
1. Indiana. That?s four losses in five games, Jared of Subway. You may wanna cancel those Final Four reservations you made back in late-December. Yes, the Hoosiers are appreciably better, but they are not an elite Big Ten team. I don?t care what any TV talking head says. Elite teams don?t lose at home to Minnesota and at Nebraska. Stop it. Now. Please.

3. February will be Ohio State?s make-or-break month. It includes two games vs. Wisconsin, visits from Michigan State and Illinois and a trip to Michigan. Still, it all could come down to the Buckeyes? final regular-season game: at Michigan State on March 4 in what could be a de facto championship game.

Three Random thoughts
1. Do you see the separation starting to take place? Look close. Closer. There. The Big Ten is morphing into a four-team race between Ohio State, Michigan State, Michigan and Wisconsin. This may be the week the Wolverines fall from the pack with games at Ohio State and vs. Indiana.

2. Coach of the year so far? Give me Orlando "Tubby" Smith. Many left the Gophers for dead after superstar Trevor Mbakwe was lost to injury. No problem, as Minnesota has remained relevant and in the NCAA conversation thanks to the blossoming of Rodney Williams. Is there a more athletic player in the Big Ten? Well, maybe Branden Dawson, but Williams is pretty darn good.

3. Let?s go ahead and start the debate right here, right now: Who?s the better freshman: Indiana?s Cody Zeller or Michigan?s Trey Burke? See, it?s a more difficult argument than many of you thought. Tell me below in the comments. I always hear it from both sides in my weekly mailbag.

Three Impressive Wins
1. Michigan 66, Purdue 64. This was the Wolverines? first true road victory of the season. And Michigan did it without relying on the 3-point shot, getting good looks inside the arc and converting. Maybe this team can win the Big Ten.

2. Wisconsin 67, Illinois 63. This is the kind of tough, gutty road victory that championship-caliber teams earn. Credit reigning Big Ten Player of the Week Jordan Taylor, who torched the Illini for 19 points, nine rebounds and five assists.

3. Michigan State 83, Purdue 58. A total and absolute destruction of a solid Boilermaker team that was forced to overcome not just the physical, tough and talented Spartans-but also an awful travel situation.

Three Games to Look Forward To
1. Sunday, Jan. 29: Michigan at Ohio State. You love the rivalry on the gridiron; you?ll love the hardwood version in 2012. But I?m not sure the Wolverines are ready for all the Buckeyes have-especially in Value City Arena.

2. Tuesday, Jan. 31: Michigan State at Illinois. We saw the Fighting Illini take down Ohio State earlier this year. Could the Spartans be next? No doubt, the sagging Illini could use a big pick-me-up win to bolster confidence and quell critics to get them back on track after back-to-back losses last week.

3. Wednesday, Feb. 1: Indiana at Michigan. Programs seemingly going in opposite directions. The Hoosiers enter the weekend having lost four of their last five. The Wolverines enjoyed a breakthrough by notching their first true road win last earlier this week at Purdue.

Three Top Freshmen
1. Trey Burke, G, Michigan. Basketball IQ of a senior. Burke can push it or pull up. Is there a better freshman point guard in America?

3. Dave Sobolewski, G, Northwestern. No. 1 in the Big Ten in assist/turnover ratio. You just know the guy sleeps with a basketball.