Looking back at 'A Memorial For Joe' 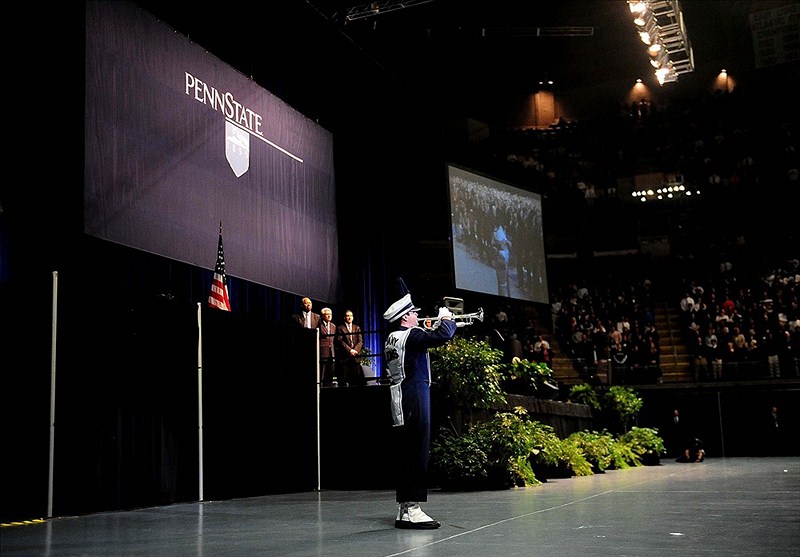 From Jay Paterno's moving tribute to his father to the various speeches from across the Penn State football family, we've posted videos from BTN's coverage of Thursday's "A Memorial for Joe" held at Penn State. Thursday's public memorial service for the late Penn State football coach was carried live on BTN, BTN2Go, and BTN.com. You can watch the entire event again on BTN2Go and on the Big Ten Digital Network.

Find all of BTN's coverage of Joe Paterno's passing on our archive page, including older videos, recent interviews with other notables, BTN.com updates, and photos. As for Thursday's events, we put a number of video clips further down in this post. Also watch four video montages from the event as well as Mike Hall's on-site interviews after the service with Daryll Clark, Ki-Jana Carter and Steve Jones.

The Paterno family arrived for a public memorial for the long-time Penn State football coach and received a rousing standing ovation. Sue Paterno cried as she accompanied her family, including her children and grandchildren, inside the Penn State basketball arena Thursday.

Ohio State coach Urban Meyer sat near the front of the crowd. Also at the ceremony were Franco Harris, Bruce Clark, Todd Blackledge and Tom Bradley, Paterno's long-time assistant coach who led the team after the school fired Paterno Nov. 9. Read more from the Associated Press on our Penn State football page.

Jay Paterno, one of Joe's sons and a former assistant coach, spoke about his father's legacy and pointed to all of the former and current Penn State players in the crowd. Near the end of his remarks, the son described his last moments with his father. As Paterno lay dying, his son kissed him and whispered in his ear.

"Dad, you won," Jay Paterno said he told him. "You did all you could do. You've done enough. We all love you. We won. You can go home now."

Representing the decade of the 1970s, former Penn State player Jimmy Cefalo recalled one of Paterno's urgings: "Hustle and something good will happen."

Chris Marrone represented the Penn State players from the 1990s. Marrone said Paterno molded him into a young man with "the strength to overcome any challenge, any adversity."

The 1980s were represented by former quarterback Todd Blackledge.

Nike founder and chairman Phil Knight spoke to the auditorium and recalled several funny stories about his friend. He also said, "If there is a villain in this tragedy, it lies in that investigation, and not in Joe Paterno's response." Read more here.

Representing the decade of the 1960s, former Penn State player Charlie Pittman said Paterno pushed his young players hard, once bringing Pittman to tears in his sophomore year. He said he realized later that the coach was not trying to break his spirit but instead was "bit by bit building a habit of excellence." spoke to the audience on Thursday.

Jeff Bast was the first mayor of "Paternoville," the name for the group of tents outside Beaver Stadium on game day here students camped out. See his speech below.

Our Big Ten Blast Report below previewed the days news.

Find BTN on your TV system with our easy and free BTN ChannelFinder and learn more about BTN2Go as well as the accompanying iPhone/iPad app. If you have any other questions, feel free to use our contact us page.