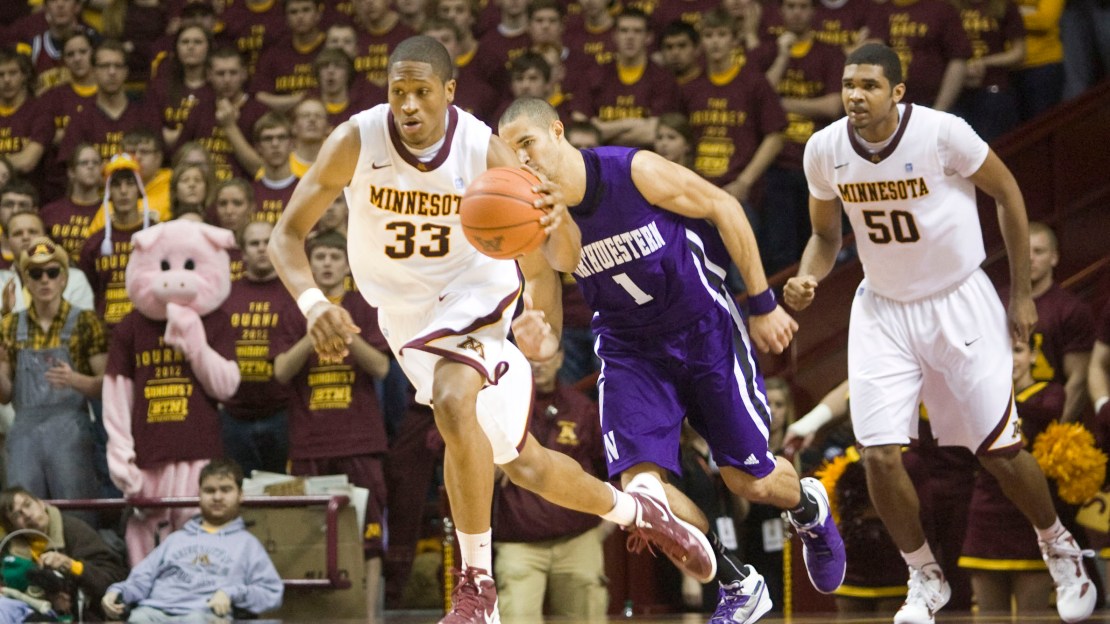 It's time to release my latest Big Ten men's hoops power rankings. The rankings are not meant to mimic the Big Ten standings. What fun would that be? They aren?t scientific, either. They?re simply my thoughts on where each Big Ten team stands right now and who would win on a neutral court. Agree? Disagree? Tweet @BTNBrentYarina or leave your comments below. See Brent's rankings in this post.

The latest national polls are out, as well. Where does your team land? And check out all of the Big Ten statistical leaders.

2. Michigan State (16-4, 5-2) – Draymond Green has more weapons around him than most experts thought, however he needs to be more aggressive. Green hasn't attempted more than eight shots in the last three games (1-2), and he's averaging 9.7 points per game during the span – 5.4 under his season average.
Last time: No. 1
This week: vs. Minnesota (1/25)

3. Michigan (15-5, 5-2) – We're about to learn a lot about the Wolverines as Tuesday's game at Purdue marks the beginning of a grueling stretch. Here's Michigan's next seven games: at Purdue, at Ohio State, vs. Indiana, at Michigan State, at Nebraska, vs. Illinois, vs. Ohio State. That's four road games, four ranked teams and zero cupcakes.
Last time: No. 4
This week: at Purdue (1/24), at Ohio State (1/29)

4. Wisconsin (16-5, 5-3) – As the four-game winning streak on the heels of a three-game funk would indicate, the trey-happy Badgers are going to have their ups and downs. One constant for Wisconsin during the recent run of success: Josh Gasser, who's shooting 52 percent and averaging 9.5 points, 4.3 rebounds and 2.8 assists per game.
Last time: No. 7
This week: vs. Indiana (1/26)

5. Indiana (16-4, 4-4) – They say that during conference play there are no secrets, that players must adjust to the way teams are playing them. Victor Oladipo has yet to make that adjustment. After pouring in 12.5 points through the first two Big Ten games and 12.2 during nonconference, Oladipo is averaging 6.5 points on a measly six-shot diet the last six games.
Last time: No. 4
This week: at Wisconsin (1/26), vs. Iowa (1/29)

6. Minnesota (15-5, 3-4) – Factor in his impact on defense, and there aren't many Big Ten players playing better than Rodney Williams right now. While the Gophers are one game under .500 in conference play, two of their losses came by fewer than five points and another came in double overtime. This team is finally finding its groove, its identity.
Last time: T-No. 9
This week: at Michigan State (1/25), vs. Illinois (1/28)

7. Illinois (15-5, 4-3) – We constantly hear about how hard it is to win on the road in the Big Ten. Perhaps nothing better proves that point than Illinois' recent struggles at Penn State. With Thursday's defeat, the Illini have lost four of their last five at the BJC. To make matters worse, two of those losses have come by one point, the other two by two points.
Last time: No. 3
This week: at Minnesota (1/28)

8. Purdue (14-6, 4-3) – The Big Ten's lone team without a win over a ranked team, Purdue has rotated wins and losses each of the last six games. Fresh off Saturday's embarrassing 83-58 defeat at Michigan State — a game in which Robbie Hummel went 0 of 11 from the field — ranked Michigan looms Tuesday night at Mackey Arena.
Last time: No. 8
This week: vs. Michigan (1/24), at Northwestern (1/28)

T-9. Iowa (11-9, 3-4) – By the time the Hawkeyes tip off Thursday night against Nebraska, they will have had eight days to prepare for the easiest part of their schedule. In the next six games, Iowa hosts Nebraska, Minnesota and Penn State and travels to Indiana, Northwestern and Penn State. With winnable games on the horizon, will Iowa be able to take advantage?
Last time: T-No. 9
This week: vs. Nebraska (1/26), at Indiana (1/29)

T-9. Northwestern (12-7, 2-5) – Losers of four of their last five — the lone win coming against Michigan State — the Wildcats have quickly played themselves out of any NCAA tourney discussion. More disturbing, a team that stresses offense over defense, Northwestern has scored 52 and 57 points the last two times out.
Last time: No. 6
This week: vs. Purdue (1/28)

11. Nebraska (10-9, 2-6) – The Huskers have averaged 46.5 points in their six Big Ten losses and have scored exactly 70 in each of their wins. There's no middle ground, either, as Nebraska has yet to tally more than 55 points in any of its conference defeats. It sounds so simple, admittedly, but Nebraska needs to find more offense.
Last time: No. 11
This week: at Iowa (1/26)

12. Penn State (10-11, 2-6) – Matt Glover's late foul aside, there's no team that is going to play harder or give more effort for 40 minutes every night. The Nittany Lions continue to improve — this is not the same team that lost to Lafayette and Duquesne earlier this season — but they still need to find someone to be Tim Frazier's permanent sidekick.
Last time: No. 12
This week: at Ohio State (1/25)