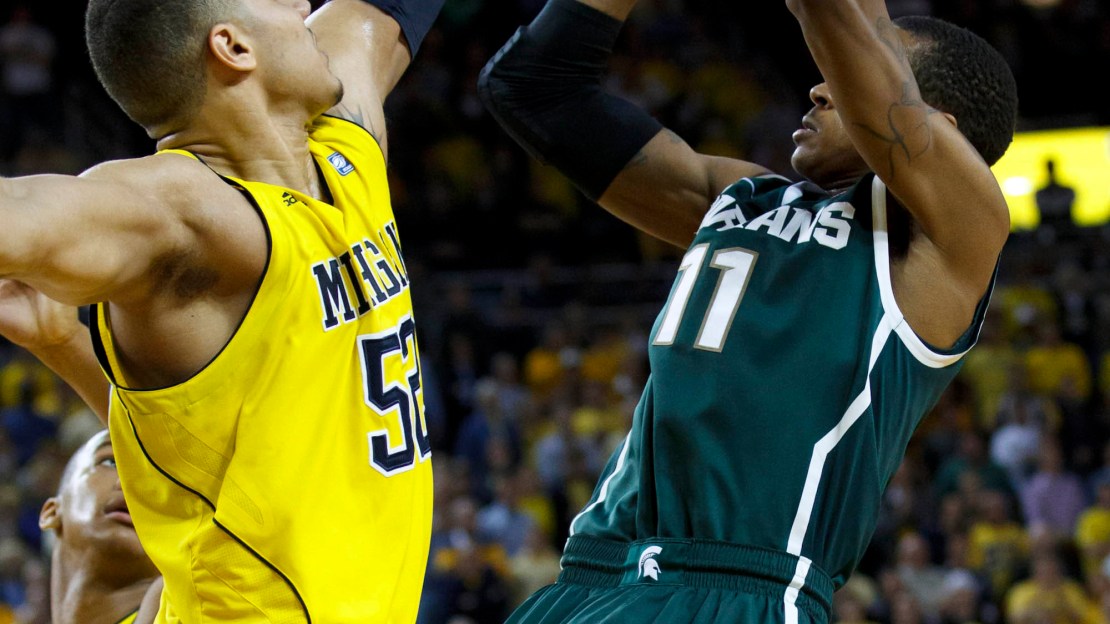 No. 18 Michigan beat No. 9 Michigan State for the third consecutive time (recap) and Purdue held off Iowa (recap) in men's hoops action Tuesday night. Catch up on all the action on our Big Ten scoreboard, plus get stats, recaps and in-game tweets in this post. Did you see the exciting final possession in the Wolverines-Spartans game? Watch the final 31.4 seconds and check out all of our popular highlight clips in our Did You See This? archive.

FINAL: Stu Douglass hit the game-winning shot with 33 seconds remaining and No. 19 Michigan beat No. 9 Michigan State 60-59 on Tuesday at Crisler Center in Ann Arbor. The field goal was the finishing touch on Douglass' nine-point performance in a dramatic win for Michigan (15-4). Trey Burke had a big performance for the Wolverines, with 20 points, four rebounds, three assists, and 8-of-11 shooting from the field. Michigan shot 51 percent from the field (23-of-45). Other the Wolverines scorers in double figures included Zack Novak and Tim Hardaway Jr., who each scored 10. Draymond Green contributed seven points, yanked down 11 rebounds, and contributed three assists for Michigan State (15-4) in the loss. Derrick Nix was 6-of-9 from the floor and chipped in 13 points for the Spartans. Michigan State hit 48 percent of its field goals (24-of-50). The Spartans crashed the offensive glass effectively, grabbing nine offensive boards. Michigan State also got a double-digit contribution from Keith Appling, who scored 10. The Spartans won the battle on the boards in the loss, as Michigan State pulled down 31 to 15 for Michigan.

Big Ten back on the map…a rejuvenation of sorts with two elite programs back 2 prominence IU and MICHIGAN. IU looking to get back on track

On the backcourt violation, Izzo was arguing Appling didn't yet have control. He was right. Shouldn't have been a violation.

Trey Burke is a stud. Top 10 point guard in the country. Smooth, fearless, poised. Not a great athlete, but uses angles & knows how to play.

Two guys I'm consistently impressed with every time I watch them: Trey Burke and Michael Kidd-Gilchrist.

Michigan State averages 22.9 FT attempts PG, 2nd in Big Ten. At the half against Michigan, they've yet to get to the line.

Michigan is going for its 3rd straight win over the #Spartans tonight, something it hasn't done since 1997 & 98. #GoBlue

I know I'm a lot crazy and maybe a little biased, but I could see these 2 teams meeting in late March.

FINAL: Robbie Hummel led five Purdue players in double digits with 17 points as Purdue (14-5) defeated Iowa 75-68 on Tuesday at Mackey Arena. The Boilermakers also got double-digit contributions from Terone Johnson (10), Kelsey Barlow (11), Ryne Smith (12) and Lewis Jackson (14). Hummel pulled down 11 rebounds and had four assists. Purdue trailed 39-36 with 16:53 in the game, but went on a 17-4 run over the next 5:00 to take a 10-point lead. Iowa (11-9) had a rough night from the free throw line, shooting 63 percent (19-of-30). The Boilermakers went 25-of-35 from the charity stripe as a team (71 percent). Devyn Marble had 18 points, yanked down five rebounds, handed out three assists, and shot 6-of-10 from the field for the Hawkeyes in the loss. More Iowa scoring came from Matt Gatens, who scored 12 and Zach McCabe, who scored 20. Winning the battle on the boards was crucial for Purdue as it grabbed 37 rebounds to 29 for Iowa.

Jackson with quite a dribbling show. Watched the #Globetrotters yesterday, they've got nothing on LewJack. #Boilermakers #Purdue

Rob is getting hot! Let's go!

HALFTIME: Devyn Marble has 11 points on 4-of-7 shooting to lead Iowa to a 36-31 lead over Purdue at the end of the first half. The Hawkeyes built their lead by attacking the rim and getting to the foul line. Through 20 minutes of play, Iowa is 7-for-12 from the free throw line. The game was tied 7-7 before the Boilermakers went into a funk, going the next 1:41 without scoring, and allowing the Hawkeyes to take a 15-7 lead with 12:00 to go in the first half. Purdue goes into the break with the offensive rebounding advantage, with 10 to Iowa's one. Seven Purdue players scored in the half. The Hawkeyes' leading scorer, Matt Gatens, has been contained by the Boilermakers thus far. The senior enters halftime with two points, well below his season average of 13.4. Robbie Hummel is putting together a nice game so far for Purdue. The senior has six points and five rebounds.

At times, this Iowa team reminds me of Dr. Tom teams…in a good way