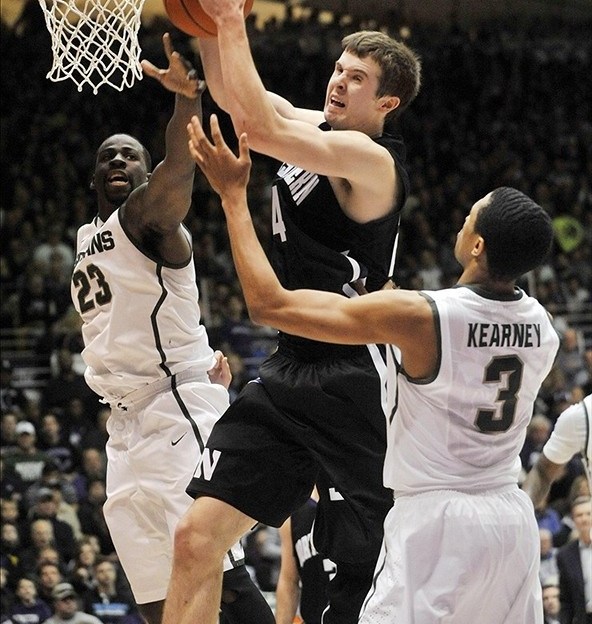 Northwestern knocked off No. 7 Michigan State 81-74 (box score) just after Iowa dropped No. 13 Michigan 75-59 (box score) to complete a Saturday of upsets in the Big Ten. Get up to speed on the latest numbers from around the conference with Big Ten stat leaders, Big Ten standings, team-by-team schedules, and our full scoreboard.

And jump into this post for the recaps, complete game highlights from Iowa City and Evanston, and more links, too. Also, check out our usual "Did You See This?" eye-popping plays, just like these from Northwestern and Michigan State. We post those incredible moments here all season long.

If you want to plan ahead, have a sneak peak at Sunday's games. There are three games, including two on BTN/BTN2Go: Minnesota at Penn State (4 p.m. ET) and Nebraska at Wisconsin (6 p.m.).

Northwestern 81, Michigan State 74: BOX | RECAP | SCOREBOARD | DID YOU SEE THIS? FINAL: John Shurna scored 22 points and grabbed five rebounds and Davide Curletti added 17 points and six boards as they teamed up to lead Northwestern to an 81-74 upset victory  over No. 7 Michigan State on Saturday at Welsh-Ryan Arena in Evanston. Draymond Green played great for Michigan State (15-3) in the loss. Green scored 14 points, hauled in 14 rebounds, dished out three assists, went 5-of-9 from the field, and hit 4-of-5 three-pointers. Northwestern (12-5) shot 51 percent from the field (26-of-51). The Wildcats were hot from long range, hitting 8-of-18 threes for a 44 percent night from beyond the arc.

Northwestern went 21-of-29 from the charity stripe as a team (72 percent). Reggie Hearn had a quality shooting game, nailing 5-of-5 shots from the field and scoring 10 points. The Wildcats also got a double-digit effort from Drew Crawford, who scored 20. The Spartans were hot from long range, hitting 9-of-19 threes for a 47 percent night from beyond the arc. Michigan State went 17-of-27 from the charity stripe as a team (63 percent). The Spartans shared the ball to the tune of 18 assists on 24 baskets. Michigan State was tough on the offensive boards, grabbing 16. The Spartans also got a double-digit game from Keith Appling, who scored 17. Michigan State pounded the boards hard in defeat as it grabbed 38 to 23 for Northwestern. With the victory, the Wildcats snapped the Spartans' 15-game winning streak.

Check out who's trending on Twitter, it's Davide Curletti! #Northwestern http://t.co/uQRfQ7H4

Does @slmandel get the Big Ten Network? Hope he's not wine tasting in Napa Valley today. NW grads don't get many moments like these.

Gus Johnson called Northwestern's upset of Michigan State. Of course he did.

HALFTIME: Davide Curletti scored 13 points, grabbed four rebounds and dished out three assists to lead Northwestern to a 39-37 first half advantage over No. 7 Michigan State. Each team took a turn in the driver's seat as the lead changed hands six times. The Wildcats made it rain from long range, shooting 50 percent (5-of-10) from three-point land. Northwestern distributed the ball well, with eight assists on 13 field goals in the first half. The Spartans hit five threes in the first half, shooting 63 percent from deep. Michigan State demonstrated its offensive efficiency by racking up 12 assists on 13 baskets. Ten Michigan State players have scored. Draymond Green led the way for the Spartans in the first half, with nine points and four rebounds.

FINAL: Zach McCabe scored 11 points and grabbed seven rebounds and Matt Gatens added 19 points as they teamed up to lead Iowa to a 75-59 upset victory over No. 13 Michigan on Saturday at Carver-Hawkeye Arena in Iowa City. Iowa (11-8)'s McCabe had three assists and 4-of-5 shooting from the field. The Hawkeyes shot 20-of-28 from the free throw line. Iowa had 18 assists on 25 baskets. The Hawkeyes also got solid contributions from Aaron White, who scored 12 and Roy Devyn Marble, who scored 13. Zack Novak contributed 14 points and hauled in eight rebounds for Michigan (14-4) in the game. The Wolverines struggled from the floor, shooting 38 percent (20-of-52). Michigan also got a solid contribution from Trey Burke, who scored 19. Iowa won the rebounding battle en route to victory, pulling down 35 boards to 28 for the Wolverines.

Great response by Iowa after 2 straight miserable outings. Not sure what to make of Mich – poor shooting & no fire for 2nd game in a row

HALFTIME: Roy Devyn Marble has eight points and four rebounds to lead Iowa to a 33-23 lead over No. 13 Michigan after 20 minutes. The Hawkeyes moved the ball in the first half, accounting for 10 assists on 14 field goals. Iowa got points from seven different players. The Wolverines have generated more of their offensive production from inside the three-point line, making 5-of-7 two-point field goals and hitting 3-of-16 from beyond the arc. Michigan's leading scorer, Tim Hardaway Jr., has been contained by Iowa thus far. The sophomore enters halftime with three points, well below his season average of 16.1. Zack Novak is putting together a nice game so far for the Wolverines. The senior has five points and four rebounds.