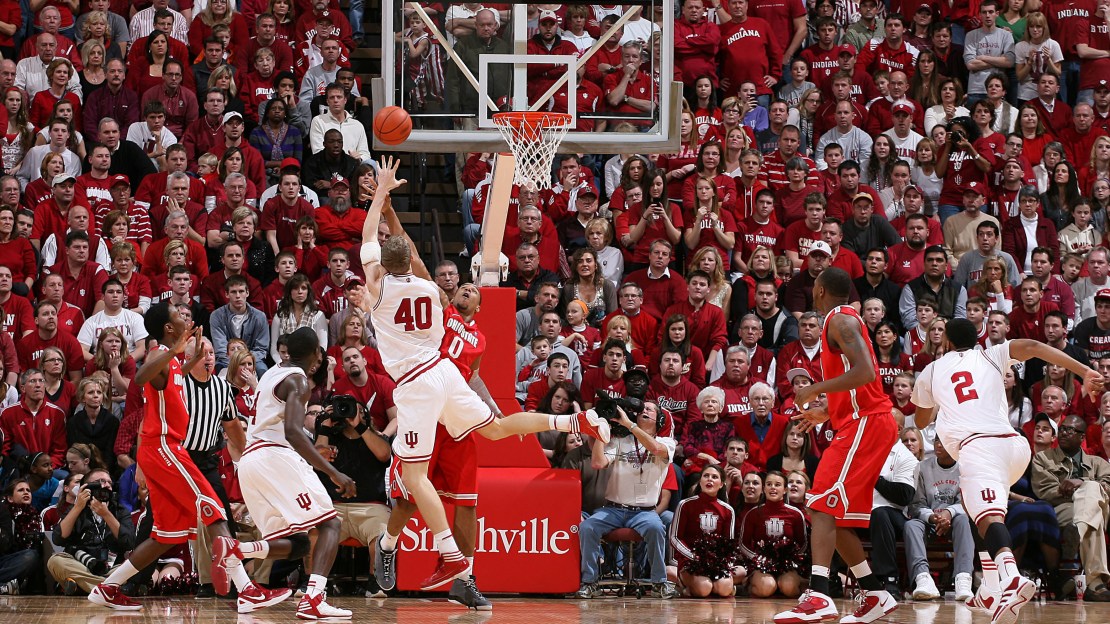 With every Big Ten basketball team having played anywhere between 15-17 games, we've reached the unofficial midway point of the 2011-12 season. Pretty soon it will be March, and that means the Big Ten tourney and NCAA tourney aren't that far off. OK, they're still two months away, but the first couple of months sure didn't take long. Find Brent Yarina's midway Big Ten honors in this post.

Midway First Team
G: Tim Frazier, Penn State – Often times a one-man wrecking crew, Frazier leads the Big Ten in assists (6.8) and finds his name atop every major statistical category for the Nittany Lions.
G: Trey Burke, Michigan – Only a freshman, Burke is third in the Big Ten in assists per game (5.0), plus he's a reliable scorer (13.8) and rebounder (3.4).
F: Draymond Green, Michigan State – The best player and leader of the Big Ten's best team so far has eight double-doubles and has scored in double figures in 15 of 16 games.
F: Jared Sullinger, Ohio State – Tied with Draymond Green with a Big Ten-leading eight double-doubles, Sullinger is shooting a ridiculous 61 percent despite extending his game outside of the paint.
C: Cody Zeller, Indiana – The heralded freshman is living up to the hype, as he leads the surprising Hoosiers in scoring (14.2) and is making good on a Big Ten-leading 66 percent of his shots.

Midway Second Team
G: Aaron Craft, Ohio State – The Big Ten's biggest pest, Craft leads the Big Ten in steals (2.6), ranks second in assists (5.1) and runs the conference's second highest-scoring offense.
G: William Buford, Ohio State – Mr. Consistency, Buford has steadily increased his numbers across the board in his final season, averaging 15.4 points, 4.7 rebounds and 3.6 assists, in addition to improving as a defender.
F: Robbie Hummel, Purdue – While his efficiency has dropped, Hummel looks as good as ever, averaging 16.2 points and 6.2 rebounds, both team highs, in addition to combining for nearly two blocks and steals per night.
F: John Shurna, Northwestern – Healthy again, Shurna leads the Big Ten in scoring (18.7), is second in blocks (1.7) and pulls down a team-leading 6.1 rebounds.
C: Meyers Leonard, Illinois – The Big Ten's most improved player, Leonard finds his name littered across the conference's leaderboard – first in blocks (2.2); third in rebounds (8.0); and third in field goal percentage (60 percent).

Midway Third Team
G: Jordan Taylor, Wisconsin – Maybe our expectations were too lofty for Taylor this year, but even through the struggles, he's contributing 13.6 points and 3.8 rebounds and taking care of the ball, with a 2.6 assist-to-turnover ratio.
G: Keith Appling, Michigan State – One of the Big Ten's elite on-the-ball defenders, Appling has become a force on offense in his first season at the point, averaging 12.5 points and 3.6 assists.
G/F: Tim Hardaway Jr., Michigan – Hardaway has a lot of help this season, but, at 15.9 points a game, he's still one of the Big Ten's most prolific scorers.
F: Deshaun Thomas, Ohio State – There was no secret Thomas could score coming out of high school as the state of Indiana's all-time leading scorer, however his 14.8 points on a limited shot diet (10.9 attempts per game) is impressive.
F: Christian Watford, Indiana – Averaging 13.5 points and 5.7 rebounds, Watford has been at his best in the biggest games, going for 20.3 points and 7 rebounds against Kentucky, Michigan State, Ohio State and Michigan.