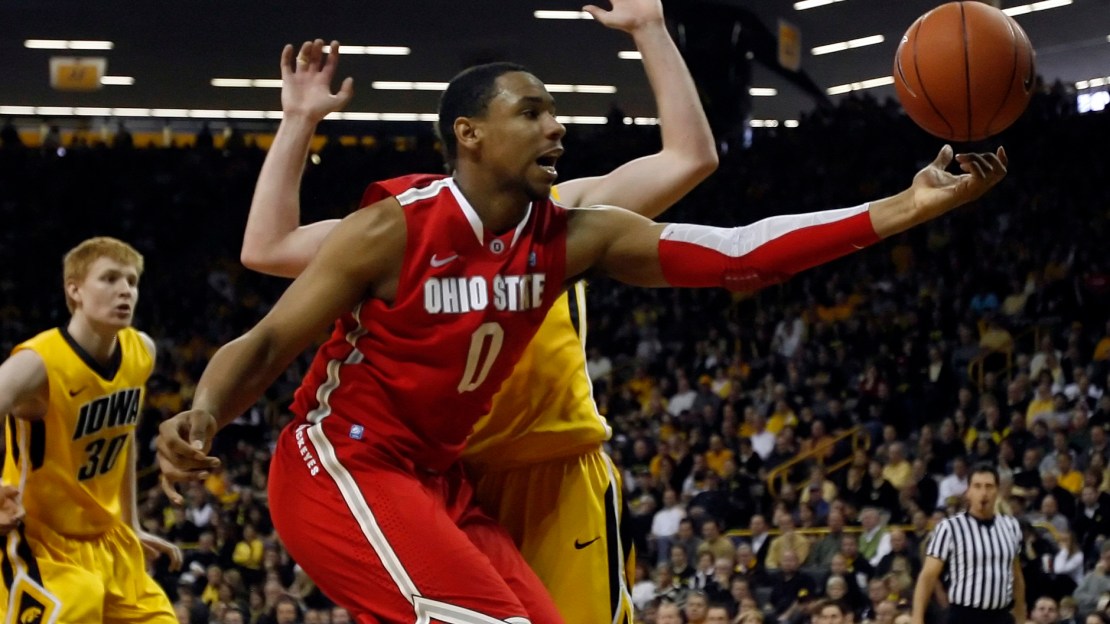 Every Sunday night during the hoops season, BTN.com web editor Brent Yarina recaps the week that was on the men?s hardwood and hands out his weekly honors. See Brent?s latest installment, for action from Jan. 2-8, in this post. And get ready for the coming week of Big Ten action with our Big Ten scoreboard.

Player of the week: Ohio State's Jared Sullinger – The Ohio State big man was dominant in a pair of victories, shooting 67 percent from the field and averaging 23.5 points, 10 rebounds and 2.5 steals. Against Iowa on Saturday, Sullinger went for a season-high 28 points and four steals, which tied a career-high. And in the week's first game, against Nebraska, Sullinger went for 19 points and 12 rebounds, his eighth double-double of the season.

Team of the week: Indiana – Still without star sixth man Will Sheehey, Indiana beat No. 13 Michigan, its third win over a ranked team this season, and won at Penn State, its first Big Ten road win in its last 17 tries. Neither win was easy – the two victories came by a combined eight points – but Indiana is now 3-1 against ranked teams, including wins over then-No. 1 Kentucky and then-No. 2 Ohio State, and 3-1 in true road games. Any way you look at it, the incredible turnaround season gets better and more legit with every passing week.

Highlights of the week: Ohio State's J.D Weatherspoon gets up on an alley-oop (watch the dunk!), Minnesota's Rodney Williams throws down a big jam and hangs on the rim (watch the slam!), Michigan State's Keith Appling breaks some ankles with a one-handed crossover (watch the crossover!), Illinois' Meyers Leonard slams home a ferocious poke and seals the win with a last-second swat (watch the dunk & block!) and Penn State's Jermaine Marshall posterizes Indiana's Matt Roth (watch the dunk!).

Impression of the week: Wisconsin is in trouble. Fresh off losses to Michigan State and Michigan, the Badgers have lost three consecutive games for the first time since early 2009. The 1-3 Big Ten record is troubling, however not nearly as concerning as Wisconsin's shooting touch. The Badgers, who make their living from the outside and don't get many easy buckets, are shooting 37 percent in Big Ten play. Remember, this was a team that hit 46 percent of its shots during the nonconference slate. Thing is, the Badgers aren't built to beat you down low, so it's simply a matter of waiting for the players to shoot themselves out of their respective slumps. It's going to happen, but if the first four games are any indication, the Badgers will be highly inconsistent.

Odd stat (line) of the week: Indiana's Matt Roth at Penn State – 5-6 FGs and 22 points. How do you score 22 points on 6 shots, you ask? You hit five 3-pointers and all seven of your free throws, good enough for an unbelievably efficient 3.7 points per attempt. By comparison, Penn State's Tim Frazier needed 23 attempts to score 21 points in the same game.

Stat of the week: Penn State's Billy Oliver entered Thursday's game against Purdue averaging 3.5 points in 52 career games, and he exploded for a career-high 21 points, on seven 3-pointers.

Stat of the week II: Wisconsin's 41 points in Sunday's loss at Michigan marked the fewest points the Badgers have scored in a regular season game under Bo Ryan. The loss also marked Wisconsin's first defeat to Michigan in the last 11 meetings.

Stat of the week III: On Sunday, the Big Ten's two Indiana schools combined to hit 26 of 39 3-pointers (67 percent), as Indiana drained a season-high 16 of 24 treys at Penn State and Purdue nailed 10 of 15 from downtown at Minnesota.

Quote of the week: "What are you going to do? Violence is out of the question." – Bo Ryan, on Wisconsin's second consecutive home loss, a controversial one to Michigan State on Tuesday (watch the waved-off 3-pointer!).

Keep your eye on…: Illinois' Joseph Bertrand – I addressed Bertrand in the "stat line of the week" category above, and his recent play warrants all of our attention. The Illini sophomore has become a regular in the Illinois rotation the past five games, and he's averaging 15 points and shooting 72 percent during the span. A super athletic guard who can create for himself, Bertrand is having no trouble finding his way to the basket for easy layups. He's on everyone's scouting report now, so it will be interesting to see how Big Ten coaches react to account for a guy no one was talking about just a few weeks ago.