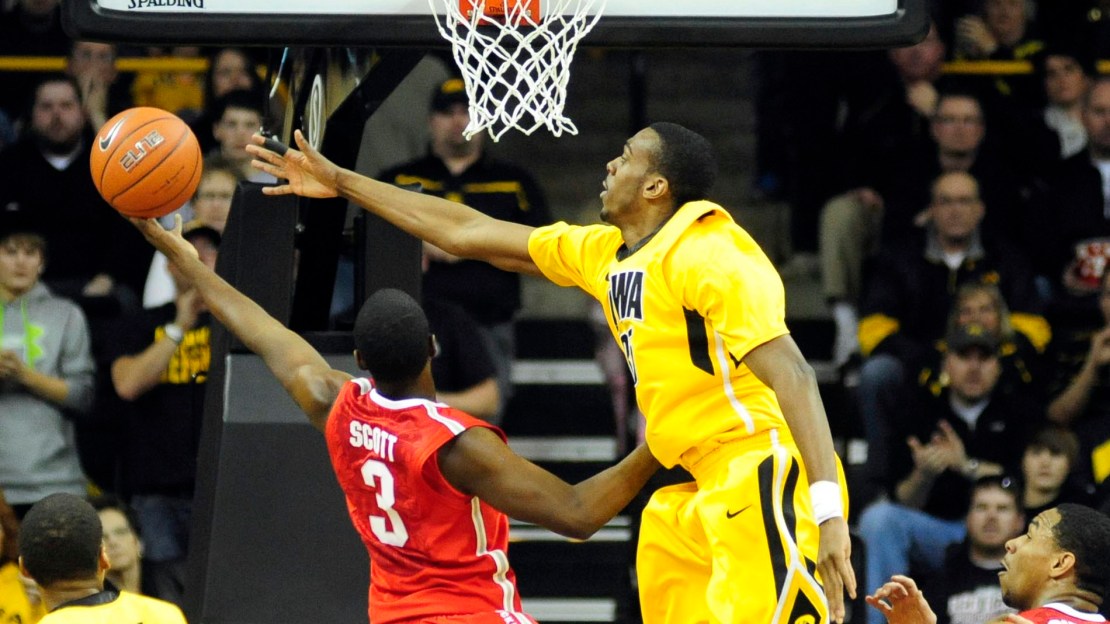 No. 7 Ohio State put away Iowa (recap) and Illinois held off Nebraska (recap) in a BTN doubleheader Saturday afternoon. Catch up on all the action on our Big Ten scoreboard and find halftime and final recaps in this post. Our Big Ten Geeks look back at recent action and realize Indiana is 3-0 in games decided by four points or less. And let this sneak peek video convince you to watch the first episode of The Journey on Sunday at 8 p.m. Also, we're tracking games for those fantastic moments you may have missed, then we post the video clips.

FINAL: Joseph Bertrand scored 25 points to lift Illinois to a 59-54 win over Nebraska on Saturday at Assembly Hall in Champaign. Brandon Paul hit a big field goal with 3:47 to go, giving Illinois (14-3) the crunch time lead. Shooting 68 percent (13-of-19) from the line cost Nebraska (8-7) in the close game. The Fighting Illini hit 52 percent of their field goals (23-of-44). Illinois also got a double-digit contribution from Paul, who scored 11 points. Bo Spencer scored 13 points and knocked down 5-of-9 shot attempts for the Cornhuskers in a losing effort. Brandon Richardson had a quality shooting game, nailing 3-of-5 shots from the field and scoring 10 points. Nebraska shot 50 percent from the field (18-of-36). The Cornhuskers also got a double-digit performance from Toney McCray, who scored 12..

HALFTIME: Illinois led Nebraska late in the first half, but allowed the Cornhuskers to use a 7-0 run to take a 25-22 lead into halftime. The Cornhuskers were able to draw fouls and get to the line with regularity. Nebraska made nine of nine free throws. The Fighting Illini led 7-2 when the Cornhuskers went on an 11-0 run to take a 13-7 lead. Through 20 minutes of action, a major weapon for Nebraska has been shut down, as Illinois has kept Bo Spencer in check. The senior enters halftime with three points, well below his season average of 14.7. The Cornhuskers demonstrated their offensive efficiency by racking up five assists on eight baskets. Nebraska got points from seven different players. Joseph Bertrand is putting together a nice game so far for the Fighting Illini. The sophomore has eight points. Brandon Richardson led the way for Nebraska in the first half, with eight points.

FINAL: Jared Sullinger scored 28 points and grabbed eight rebounds to lift No. 7 Ohio State to a 76-47 win over Iowa on Saturday at Carver-Hawkeye Arena in Iowa City. Scoring so few points is rare for Iowa (10-7), a team that came in averaging 76.7 points per game this season. Ohio State (15-2) held the Hawkeyes to 32 percent shooting from the field, hauled in 29 defensive boards, while only allowing seven offensive rebounds, and just 13 free throw attempts. A run lasting across the halftime break allowed the Buckeyes to grab the advantage. Ohio State led 22-19 late in the first before it widened the margin to 17 points with a 16-2 run that ended with 17:55 in the game. The Buckeyes hit 52 percent of their field goals (33-of-64). Ohio State also got a solid contribution from Deshaun Thomas, who scored 10 points. The Buckeyes won the rebounding battle en route to victory, pulling down 39 boards to 29 for Iowa.

HALFTIME: Jared Sullinger scored 15 points for No. 7 Ohio State in the first half to carry the Buckeyes to a 28-19 lead over Iowa. The Hawkeyes shot 22 percent from the field during the first half. Through 20 minutes of action, a major weapon for Iowa has been shut down, as Ohio State has kept Matt Gatens in check. The senior enters halftime with two points, well below his season average of 13.6. The Buckeyes demonstrated their offensive efficiency by racking up nine assists on 13 baskets. Eric May is putting together a nice game so far for the Hawkeyes. The junior has five points.