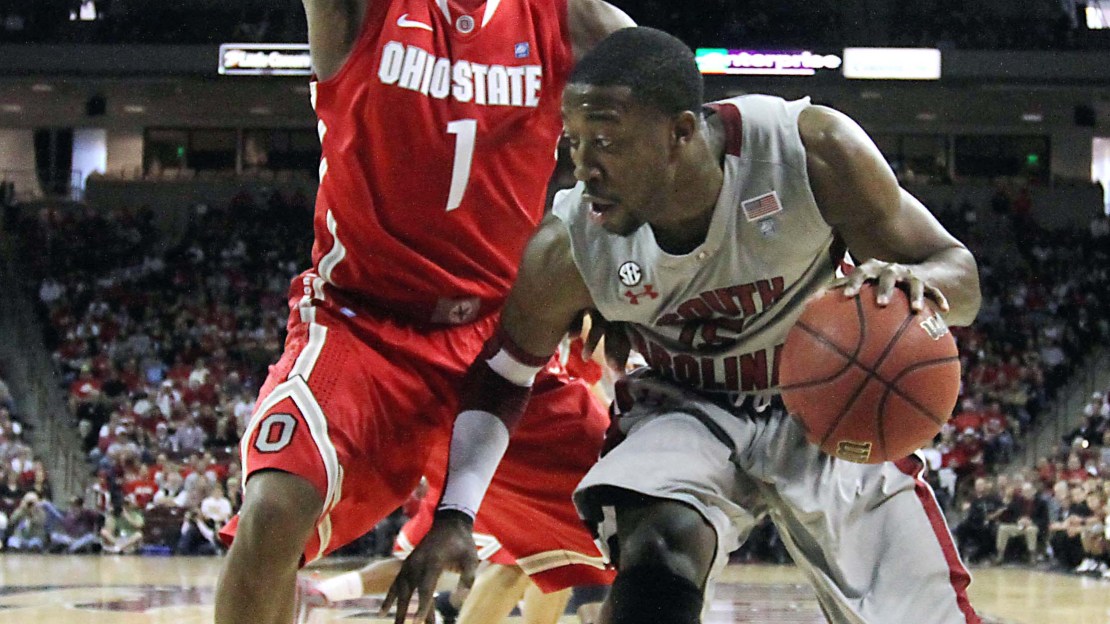 Every Sunday night during the hoops season, BTN.com web editor Brent Yarina recaps the week that was on the men?s hardwood and hands out his weekly honors. See Brent?s latest installment, for action from Dec. 12-18, in this post. And get ready for the coming week of Big Ten action with our Big Ten scoreboard. Also, watch our latest installment of the Big Ten Blast right now.

Player of the week: Deshaun Thomas, Ohio State – No Jared Sullinger, no problem. With the preseason Big Ten Player of the Year forced to the bench early Saturday at South Carolina, Thomas shot 13 of 16 from the field (81 percent) and erupted for a career-high 30 points on his way to leading the Buckeyes past the Gamecocks. In two games, Thomas averaged 26.5 points, three rebounds and three assists, all while shooting an incredible 74 percent from the field.

Team of the week: Ohio State – The Buckeyes bounced back from last week's first loss of the season by throttling South Carolina Upstate, 82-58, on Wednesday and rallying for a 74-66 victory Saturday at South Carolina. And they did it with star Jared Sullinger coming off the bench Wednesday and contributing only six minutes at South Carolina, thanks to a foot injury suffered in the opening minutes.

Highlights of the week: Northwestern's John Shurna shows off his hang time on an alley-oop versus Eastern Illinois (watch the dunk!), Michigan State's Travis Trice came from behind to swat away a would-be layup against Bowling Green (watch the rejection!), Ohio State's Sam Thompson tallied an impressive block and two highlight-reel slams Wednesday (watch all the plays!) and Michigan's Blake McLimans delivered a crippling pick to set up a buzzer-beater (watch the screen!).

Impression of the week: Indiana's Cody Zeller and Michigan's Trey Burke sure don't play like freshmen. In the opening weeks of the season, there were a handful of freshmen standing out among the rest. More than a month into the action, though, it's the Zeller and Burke show. Zeller not only stars for Indiana, the Big Ten's final unbeaten, he leads the team in field-goal percentage (64 percent), scoring (15.6 ppg), rebounds (7.5 rpg), steals (2.3 spg) and blocks (1.6 bpg). If there were a nonconference all-Big Ten team, he would be a unanimous first-team pick. As for Burke, the Wolverines couldn't have asked for better production from Darius Morris' replacement. The one-time Penn State recruit averages 13.1 points and 4.7 assists, and he continues to improve and contribute in all facets, including from downtown – a department Morris never mastered.

Odd stat of the week: Ohio State's Deshaun Thomas vs. South Carolina teams – In back-to-back games against South Carolina-Upstate and South Carolina, Thomas hit 17 consecutive two-point field goals, his last six attempts in the first game and all 11 in the second.

Keep your eye on?: Illinois – Yes, the Illini struggle at the United Center. And yes, Saturday's loss was Illinois' first defeat and it came against UNLV, the same team that sent then-No. 1 North Carolina to its first loss late last month. Still, the Illini are no stranger to battling their share of drama during a season. To that point, Bruce Weber called out breakout sophomore Meyers Leonard on Saturday for being distracted by talk of his NBA future. In years past, former point guard Demetri McCamey was constantly in and out of Weber's doghouse, as was last season's big-time prospect Jereme Richmond. This could be and probably is just a minor thing that will play itself out, but it's definitely something to watch. It could result in Leonard refocusing and taking his game to another level or it could be a distraction.

Keep your eye on II…: Nebraska's Jorge Brian Diaz's foot troubles. The pain is nothing new for the Husker big man who averages 10.9 points and 2.6 blocks, however it's definitely a concern. Diaz missed Saturday's victory over Alcorn State and he's expected to miss Tuesday's game against Central Michigan. Another visit to a foot specialist at Duke University could be the next move, according to Husker Extra.