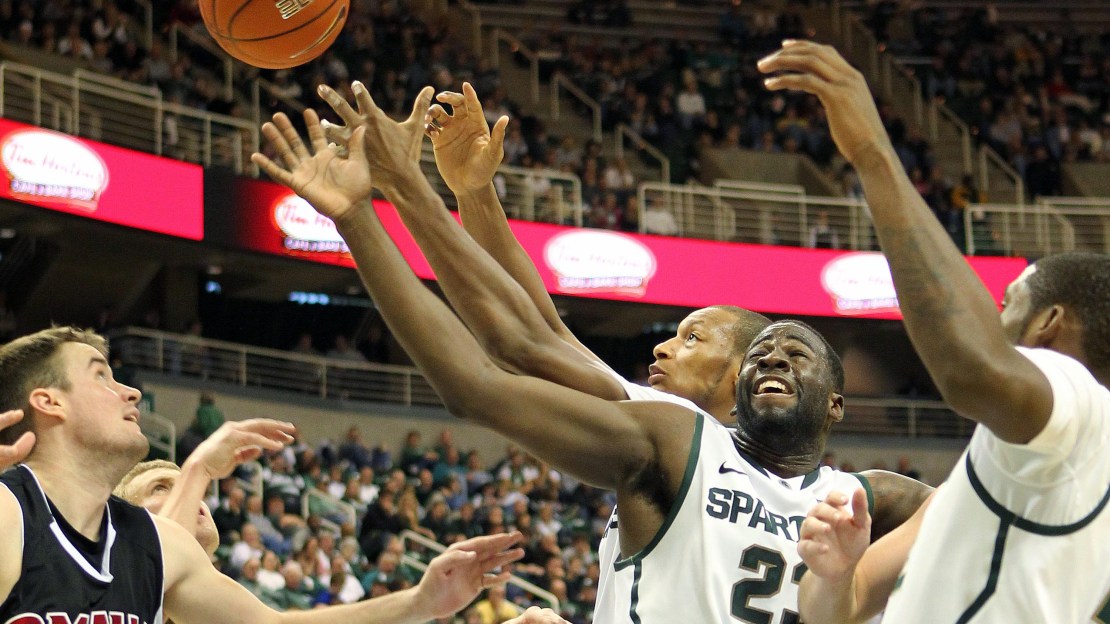 It's time to release my latest Big Ten men's hoops power rankings. The rankings are not meant to mimic the Big Ten standings. What fun would that be? They aren?t scientific, either. They?re simply my thoughts on where each Big Ten team stands at that time. Agree? Disagree? Tweet @BTNBrentYarina or leave your comments below.

The week ahead pits Big Ten teams against two of the nation's best programs, No. 1 Kentucky and No. 13 Kansas. Indiana hosts Kentucky at 5:15 p.m. ET Saturday, while Ohio State plays at Kansas at 3:15 p.m. Saturday. Check out Brent's latest power rankings in this post.

1. Ohio State (8-0) – When you can make Coach K utter this quote in a postgame presser, it's clear you have a special team: "Sometimes you just get your butt kicked." On Tuesday, the loaded Buckeyes drilled then-No. 4 Duke, 85-63, to give them a second signature win over top 10 teams before playing a game in December. Yeah, this team is REALLY good.
Last time: No. 1
This week: at Kansas (12/10)

2. Michigan State (6-2) – After opening the season with losses to North Carolina and Duke, the Spartans have reeled off six consecutive wins. The schedule hasn't been terrific during the streak – Wisconsin-Milwaukee and Florida State headline it – but Michigan State has done what it's supposed to do: drill inferior opponents. The recent play of Keith Appling, who flirted with a triple-double Sunday, has been as big of a reason as any for the hot run.
Last time: No. 4
This week: vs. Central Connecticut State (12/7), at Gonzaga (12/10)

3. Wisconsin (6-2) – Let's not overreact to the Badgers' back-to-back losses. I mean, one came at North Carolina in the Big Ten/ACC Challenge and the other came against instate rival Marquette hours before the inaugural Big Ten Football Championship Game, featuring the Badgers. All in all, it was a case of the 3-pointers simply not falling. A team that will live and die by its success from the arc, Wisconsin went 13 of 47 on treys (28 percent) in the two defeats.
Last time: No. 2
This week: Green Bay (12/7), UNLV (12/10)

4. Illinois (8-0) – Nearly one month into the season, Bruce Weber is the frontrunner for Big Ten Coach of the Year. While everyone knew the Illini had their share of highly recruited players on the roster, they still had to replace 80 percent of their starting lineup. Addition by subtraction, as they say. And the development and improvement of Meyers Leonard has made it all possible.
Last time: T-No. 7
This week: vs. St. Bonaventure (12/7), Coppin State (12/11)

T-5. Indiana (8-0) – Anyone looking for Indiana to revert to its losing ways from the past three seasons must wait longer. You might want to grab a chair, in fact. And anyone expecting Cody Zeller to take a step back and play like a freshman, well, you know the drill. Indiana and Zeller are legit, and while they face No. 1 Kentucky on Saturday, this is a team on the upswing, regardless of Saturday's result. Wednesday's win at North Carolina State, a team full of athletes, proved a lot.
Last time: No. 6
This week: vs. Kentucky (12/10)

T-5. Michigan (6-2) – It's tough to win on the road when your star player has an off night or is battling foul trouble, and Michigan learned that the hard way in its Big Ten/ACC Challenge loss at Virginia. Tim Hardaway Jr. played 25 minutes, thanks to early foul trouble, and scored five points, his lowest total since contributing two against Penn State on Jan. 2. The Wolverines are far from a one-man team, but it doesn't feature the firepower to get by without Hardaway being a force.
Last time: No. 3
This week: vs. Oakland (12/10)

7. Purdue (7-2) – The Boilers almost tallied what could have been viewed as the Big Ten's most impressive victory of the season Saturday at then-No. 11 Xavier. We all know what happened, though. Robbie Hummel battled leg cramps and Purdue lost a 19-point second-half lead en route to the 66-63 loss. The defeat is irrelevant when compared to Hummel's health. Forget about the two season-ending knee surgeries, Hummel is prone to his share of lesser injuries. And because no player is more important to his team's success, Boiler fans would not be faulted for crossing their fingers.
Last time: No. 5
This week: vs. Western Carolina (12/7), vs. Eastern Michigan (12/10)

8. Northwestern (7-1) – Well, it's safe to say Northwestern didn't exactly ace its biggest nonconference test in the last, say, 15 years in Sunday's 69-41 loss to then-No. 8 Baylor. The Bears were way too much for the Wildcats on both ends of the floor, particularly on defense where they tallied nine blocks and limited the Wildcats to 24 percent from the field. Luckily, Bill Carmody and crew have a week and a half before it plays again.
Last time: T-No. 7
This week: No games

9. Minnesota (8-1) – So far, so good for the Gophers in the absence of injured star Trevor Mbakwe. Much of the credit can be directed to Rodney Williams, the supremely athletic but often underperforming junior. In the last two games, Williams has averaged 13.5 points and 8.5 rebounds, the latter the most important because it helps make up for losing the Big Ten's top rebounder. If Williams can continue to play at this level, the Gophers will be better off than everyone expected in the wake of the Mbakwe news.
Last time: No. 11
This week: vs. Appalachian State (12/6), vs. St. Peter's (12/10)

10. Nebraska (4-3) – The 10-point road loss to Creighton isn't all that concerning, mostly because the Bluejays are good and will be a tough team to beat this season. The two-point home loss to Wake Forest in the Big Ten/ACC Challenge, however, is not a good sign. In two home games against major conference teams (Wake and Oregon), Nebraska is 0-2. Teams have to protect home court, especially in the Big Ten.
Last time: No. 9
This week: vs. Florida Gulf Coast (12/7), at TCU (12/10)

11. Iowa (5-3) – As Melsahn Basabe goes, so go the Big Ten's most inconsistent team thus far. In wins, Basabe averages 10.6 points and 6.2 rebounds; in losses, he puts in two points and 2.3 assists. That said, Basabe's numbers in wins have come against far inferior foes, so last year's breakout freshman is still a prime sophomore slump candidate.
Last time: No. 10
This week: at Northern Iowa (12/6), at Iowa State (12/9)

12. Penn State (6-3)  – Junior point guard Tim Frazier continues to light it up, leading the Nittany Lions in every major statistical category. A reason for worry: Penn State has allowed 70.3 points per game against opponents from major conferences, compared to 59 versus everyone else. That's a big concern when you boast the Big Ten's worst offense, one that averages 63.3 points, 4.6 fewer than Michigan.
Last time: No. 12
This week: vs. Lafayette (12/7), at Duquesne (12/10)