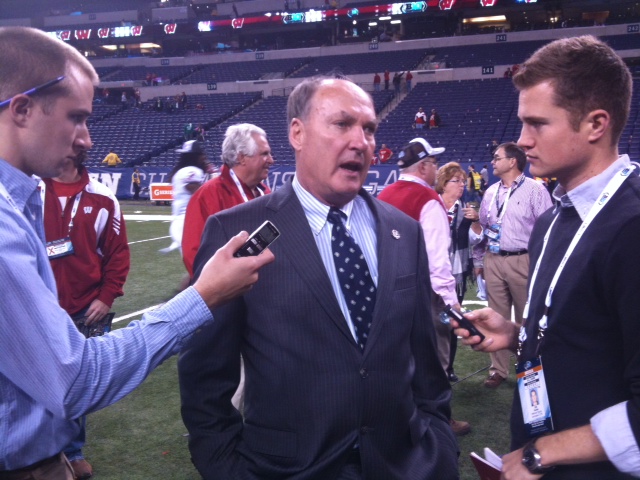 "This is everything we'd hoped it would be," Delany said, standing in the middle of a scene he helped make possible.

Delany was talking about the inaugural Big Ten Football Championship Game, the instant-classic that saw Wisconsin rally for a 42-39 comeback victory over Michigan State and claim the conference's automatic berth to the Rose Bowl. But he might as well had been referring his decisions and gambles, dating back to June 2010, when he invited Nebraska to the Big Ten.

That's what made this whole thing possible, after all. With the addition of the Huskers, the Big Ten moved to 12 teams, allowing it to divide into two divisions and create a conference championship game.

Eighteen months later, Delany looks like a genius. Not only did the first year of divisional play create a lot more excitement and extend the drama, with the Leaders Division coming down to the season finale, it also gave us a rematch of the Big Ten's best game of the season: Michigan State vs. Wisconsin.

And it was just as good, if not better, as the first meeting. No, there was no last-second "Rocket," but there was an equally memorable late 4th-and-6 conversion at Lucas Oil Stadium. This time, Russell Wilson played the role of Kirk Cousins and Jeff Duckworth the role of Keith Nichol. It was an incredible 36-yard conversion, made even bigger because of the moment and the fact it set up the game-winning score.

All in all, Delany couldn't have drawn up a better first title game, right?

On a day where conference championship games left a lot to be desired, including the SEC, the Big Ten delighted and entertained every step of the way. The teams combined for 81 points, including 28 in a crazy first quarter, and nearly 800 total yards, and both rallied from a deficit of at least 14 points.