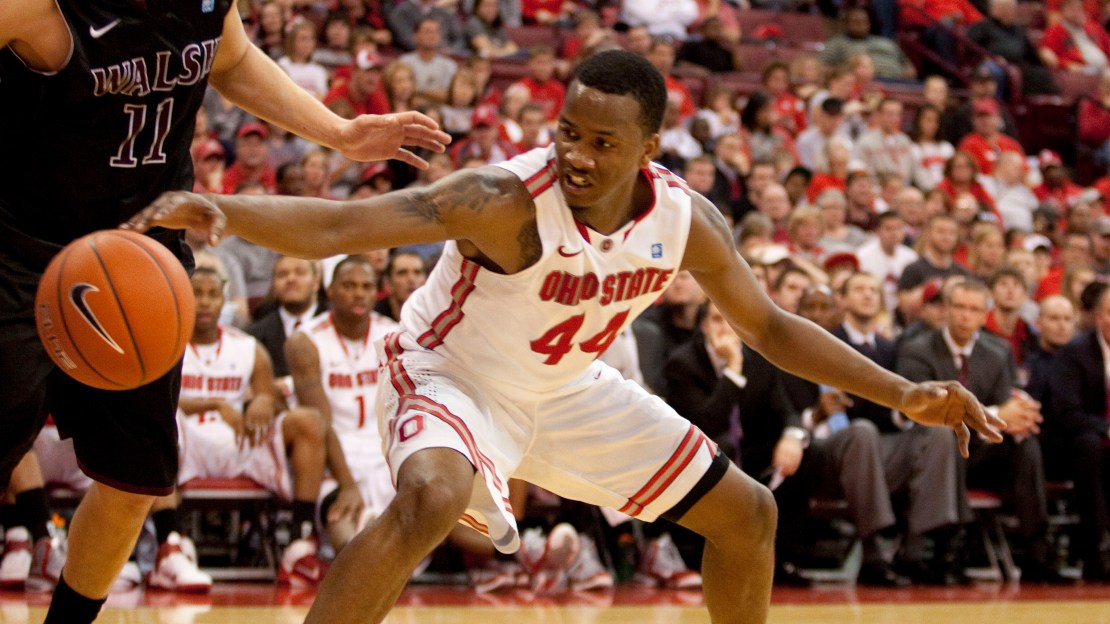 Every Big Ten men's hoops team has played at least one game, and in today's quick-to-judge world, we thought why not offer some initial thoughts on what we've seen through the first week of action. See Brent Yarina's way-too-early Big Ten impressions in this post.

Watch our interview with Wisconsin star point guard Jordan Taylor now. Tuesday night on the hardwood, No. 3 Ohio State beat No. 8 Florida and No. 6 Duke held off Michigan State. There's a trio of Big Ten games Wednesday, including Wisconsin hosting Colgate and Indiana traveling to Evansville.

1. Iowa will be fun to watch. Todd Lickliter's fingerprints are nowhere to be found on this team. Sure, Matt Gatens and Eric May are still around, among others, but the Hawkeyes don't look anything like the methodical and often un-entertaining teams of recent memory. Iowa began to ratchet things up last season in Fran McCaffery's first season, however now it's taking it to a new level. Consider this: Iowa has scored 95 and 96 points in its first two games, compared to 69 and 68 in its opening games a season ago.

2. Indiana boasts a frontcourt, albeit a very thin, unproven one. No longer do the Hoosiers have to rely on a frontcourt that requires minutes from the Tijan Jobes and Tom Pritchards of the world. While Pritchard, arguably the team's best player in 2008-09, is still in the fold, he's an afterthought with just 17 minutes in the first two games. That's the case due to the arrival of heralded freshman Cody Zeller, who registered a double-double in his debut, and the health of Derek Elston. Neither player is proven and both will battle inconsistencies, but they're a vast improvement over what Tom Crean has had down low during his Indiana tenure.

3. Get to know Tim Frazier. The casual Big Ten basketball fan might not know Frazier, but he/she will after watching Penn State this season. Frazier is a popular breakout candidate for 2011-12, and for good reason. Not only is he the Nittany Lions' lone returning starter, but he's a player who can impact the game in so many ways. He'll be Penn State's Talor Battle of a couple years ago, in that he's going to produce across the board and often times seem like a one-man attack. It will be up to Penn State's inexperienced players to make sure this doesn't become the case. Frazier has done it all in the season's first two games, averaging 18 points, eight assists, five rebounds and four steals per game. Expect big stat lines the whole year.

4. This is the year Meyers Leonard delivers on promise. In 272 minutes last year, Leonard blocked 13 shots (one block every 20.9 minutes). Fast forward to this season, and Leonard has 11 blocks in 49 minutes (one block every 4.5 minutes). While Leonard and the Illini haven't faced a test in their first two games, it's impossible not to notice the strides the sophomore has made – he's averaging 11.5 points and 5.5 blocks per game, after all. With Leonard, it's all about maturation and learning the game. The guy couldn't get out of his own way as a freshman, averaging a foul every five minutes he played, but he's playing smarter and has only been whistled for TWO fouls. Staying out of foul trouble will be the key for Leonard, because if he can stay on the floor, he's going to produce and Illinois will be a better team.

5. Purdue needs to find an inside scoring presence. Maybe it's an overreaction to the two-point victory over High Point at home, but the Boilers must find some sort of inside scorer if they hope to be among the top teams in the Big Ten. You can play great defense and shoot lights out behind the arc and be a good team – during spurts – however it isn't the recipe for continued or consistent success. Jump-shooting teams are notoriously hot and cold, and it sure looks like Purdue's fate will be decided by how it's shooting from outside. Someone has to step up, whether it's having Robbie Hummel work inside to give the team more easy looks or hoping that freshman Jacob Lawson can somehow become an instant force. The Boilers will be a good team, but it could struggle to be anything more if they don't create more looks in the paint.

Other things that stood out: