The Big Ten's Best of October 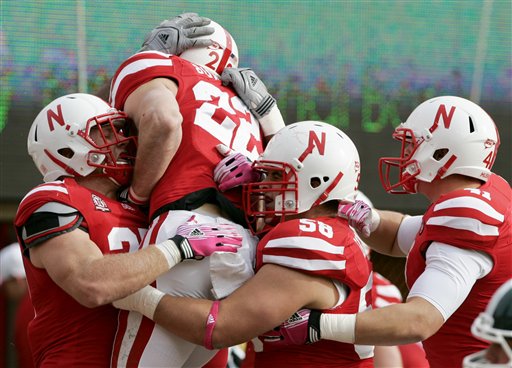 October was a crazy and unpredictable month. The proof: Under-the-radar Penn State went 5-0 and sits comfortably atop the Leaders Division, Big Ten favorite Wisconsin lost back-to-back games on last-minute Hail Marys, Michigan State got through a stretch of Ohio State, Michigan and Wisconsin unscathed, and Iowa lost to struggling Minnesota despite getting 252 rushing yards from Marcus Coker. The list could continue, but you get the point.

With the calendar now turned to November, BTN.com web editor Brent Yarina offers up his Big Ten's best of October. Watch our Next Level interview with Ohio State's Boom Herron now and see all of Brent's winners in this post.

Best game: No. 15 Michigan State 37, No. 4 Wisconsin 31 – In what was viewed as the Big Ten Game of the Year at the time, the Spartans and Badgers didn't disappoint, with the game coming to the last second, the last play. And we all remember how it turned out. Who could forget? With overtime looking like the likely destination, Kirk Cousins and the Spartans had other ideas. On the final play, Cousins launched the ball into the end zone, where it deflected into Keith Nichol's hands just shy of the goal line. We know the rest. There was an official review, the call was overturned, and the Spartans had handed the Badgers their first loss in unbelievable fashion.
Runner-up: Ohio State 33, No. 12 Wisconsin 29 (sorry, Badger fans)

Best team: Penn State – It wasn't pretty, to be sure, but the Nittany Lions won all five of their October games, and as a result, stand as the lone undefeated Big Ten team in conference play. Knock the schedule all you want, but the fact remains Penn State is 5-0 and sits very pretty atop the Leaders Division by beating the teams it's supposed to.
Runner-up: Michigan State

Best offensive player: Rex Burkhead, RB, Nebraska – Burkhead ran fewer yards than Penn State's Silas Redd, albeit in one fewer game, and scored fewer touchdowns than Wisconsin's touchdown machine Montee Ball, but he did it all for the Huskers in October. The junior running back reached the 100-yard rushing mark in three of Nebraska's four games, the lone exception being a 96-yard effort at Wisconsin, averaged 139.3 total yards per game and scored seven touchdowns, including his first two receiving scores.
Runner(s)-up: Silas Redd, RB, Penn State; Montee Ball, RB, Wisconsin

Best defensive player: Gerald Hodges, LB, Penn State – Hodges has really dominated the past two weeks, each resulting in Big Ten Defensive Player of the Week honors, but he was a big force in all five games, all Penn State wins. Hodges averaged 11.4 tackles per game, helped a ton by his incredible 19-tackle effort against Illinois, and also added four sacks, an interception and a forced fumble.
Runner-up: Lavonte David, Nebraska

Best play: Michigan State Hail Mary to beat Wisconsin – This one is too easy. It's the play of the Big Ten season, both because of the ridiculousness/timing of the play and the fact it sent Wisconsin, then a team entertaining BCS title aspirations, to its first loss. Kirk Cousins and Keith Nichol will forever be remembered in Michigan State lore, and it has nothing to do with their quarterback competition a couple seasons ago.
Runner-up: Ohio State Hail Mary to beat Wisconsin (sorry again, Badger fans)

Best story: Penn State and Joe Paterno – The Nittany Lions, as mention several times above, won all five of their games in October. In the process, Penn State made Joe Paterno the all-time winningest coach in major college football history, with 409 wins. Paterno, 84, tied Grambling's Eddie Robinson in the Northwestern win and broke it last week against Illinois.
Runner-up: Jerry Kill gets first Big Ten win – Considering all Kill has been through in his first season in Minneapolis, what with the well-chronicled seizures and great struggles on the field, Minnesota's upset win over Iowa last week was important for more reasons than it helped the Gophers retain the Floyd of Rosedale trophy for a second consecutive year. This was Kill's first Big Ten win, and in a year like this one, it was much needed for the coaches, the players, the administration and the fans.