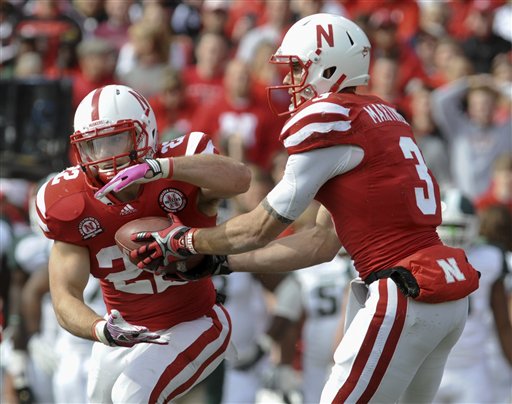 Every week during the football season, Brent Yarina posts his latest Big Ten Power Rankings. Week 9 saw Nebraska hand Michigan State its first Big Ten defeat and Penn State remain unbeaten. As for the power rankings, they are not meant to mimic the Big Ten standings. What fun would that be? They aren?t scientific, either. They?re simply Brent?s thoughts on where each Big Ten team stands after its latest game and entering its next contest. Agree? Disagree? Tweet @BTNBrentYarina.

Find out what BTN.com senior writer Tom Dienhart learned in Week 9 and check out his Week 9 Hot & Not list. The latest BCS Standings are out, and there's a new Big Ten team pacing the conference for the second straight week. Also, our Buffalo Wild Wings Trip to the Big Ten Championship promotion is still open for entries.

1. Nebraska (7-1, 3-1) - The passing game still leaves much to be desired, but the defense is finally playing the part of the Blackshirts. Linebacker Lavonte David is flying all over the field and cornerback Alfonzo Dennard looks healthy for the first time this season. And Rex Burkhead more than makes up for what the offense can't do through the air.
Last week: No. 3
Next game: vs. Northwestern

2. Michigan (7-1, 3-1) - While Denard Robinson has been wildly inconsistent – per usual in Big Ten play – the defense continues to shine under first-year coordinator Greg Mattison. Yes, the Michigan defense is leading the way. The proof: Michigan's opportunistic group is surrendering just 16.5 points in its first four Big Ten games, this after allowing 37 ppg during the same span a year ago.
Last week: No. 5
Next game: at Iowa

3. Penn State (8-1, 5-0) - The Big Ten's lone undefeated team remains the conference's biggest surprise. Regardless of the record, Penn State hasn't faced its toughest competition; in fact, its five Big Ten wins have come against teams with a combined 7-16 conference clip. The Nittany Lions' last three games (vs. Nebraska; at Ohio State; at Wisconsin) will let us know where JoePa's team really stands.
Last week: No. 4
Next game: vs. Nebraska (Nov. 15)

T-4. Michigan State (6-2, 3-1) - If the offense could find any consistency or live up to the preseason hype, the Spartans would be a great team. Michigan State features one of the most aggressive and big-play defenses around, but it isn't getting much help from the other side of the ball, where Edwin Baker has one 100-yard game and Kirk Cousins has been up and down all season.
Last week: No. 1
Next game: vs. Minnesota

T-4. Wisconsin (6-2, 2-2) - It'll be interesting to see how the Badgers respond to their second straight heartbreaking loss. Will the back-to-back last-minute road defeats lead to a late swoon? Or will it force Wisconsin to refocus and get back to its dominant ways? One thing's for sure: Bret Bielema and company must figure out their punt blocking, because a blocked punt in consecutive weeks is a disturbing trend.
Last week: No. 2
Next game: vs. Purdue

6. Ohio State (5-3, 2-2) - Saturday night was one of those performances that can give a heralded freshman like Braxton Miller all the confidence he needs to flip the proverbial switch. Miller wasn't impressive through the air, but he created the dramatic game-winning heave with his feet, instincts and smarts (Watch and rate the play!). If Miller can avoid turnovers and continue to be a force on the ground, along with Boom Herron, the improved defense can do the rest.
Last week: No. 7
Next game: vs. Indiana

7. Iowa (5-3, 2-2) - It was a road game against a heated rival, sure, but the opponent was lowly Minnesota, which had been outscored 144-31 in its first three Big Ten games. The more troubling fact has to be that the Hawkeyes couldn't even beat the Gophers on a day that Marcus Coker ran for a career-high 251 yards. What would have happened if Coker had a typical day?
Last week: No. 6
Next game: vs. Michigan

8. Northwestern (3-5, 1-4) - The Wildcats still can't stop anyone on defense, but they can win games against equal or inferior foes with their offense alone. Quietly, Kain Colter is turning into the Big Ten's best all-around talent. You name it, Colter does it well. He's the conference's only player who can lead his team in passing, rushing or receiving on any given day.
Last week: No. 10
Next game: at Nebraska

9. Purdue (4-4, 2-2) - Here's what we know about the Boilers through the first eight games: They don't like streaks and they aren't the same team on the road. Purdue has rotated wins and losses every week this season, believe it or not, and it is 0-3 on the road, including a loss at Rice. Up next: at Wisconsin, meaning the Boilers will either snap their streak of rotating wins and losses or tally their first road win.
Last week: No. 8
Next game: at Wisconsin

10. Illinois (6-3, 2-3) - Whether it was the inclement weather or Penn State's stout defense, Illinois' offense can't get out of its own way. The Illini scored just seven points and totaled 286 yards en route to their third consecutive defeat. The run game continues to be the Illini's biggest downfall – they averaged 3.8 yards per carry – but Nathan Scheelhaase hasn't been blameless during the funk, either.
Last week: No. 9
Next game: vs. Michigan (Nov. 12)

11. Minnesota (2-6, 1-3) - For the second consecutive season, Minnesota upset rival Iowa to win the coveted Floyd of Rosedale bronze pig. This unexpected win might have been the more surprising of the two, though, seeing as how the Gophers had been outscored 144-31 in its first three Big Ten games.
Last week: No. 12
Next game: at Michigan State

12. Indiana (1-8, 0-5) - The Hoosiers have found some young, talented options on offense, what with Tre Roberson and Stephen Houston breaking out recently, but the defense is nothing short of terrible. Indiana is starting as many as seven freshmen on defense, admittedly, but there's no excuse for allowing an average of 44 points per game in Big Ten play.
Last week: No. 11
Next game: at Ohio State

?@BTNBrentYarina: What year did you graduate from u of m?

@BTNBrentYarina Head to head outcomes made with some teams but not others? Michigan is no better than the 6th best team in the league.

@BTNBrentYarina Iowa should be lower.

#1 is right but 2-6 is tough to organize… @BTNBrentYarina

@BTNBrentYarina -Switch Ohio State and Wisky and make OSU 5th instead of tied for 4th and you have it.

@BTNBrentYarina Iowa should be #12 for the most embarrassing loss in program history.

@BTNBrentYarina You have Iowa far to high!

@BTNBrentYarina SO hard to rank teams after yesterday. Right now #B1G = "Any given Saturday"

@BTNBrentYarina I'd switch Mich. and PSU. Michigan lost to MSU but other than that played the same B1G schedule as Penn State